‘The Great Physician had done all he could do’ After quadruple bypass man takes cross, message of Christ to Mississippi, rest of country 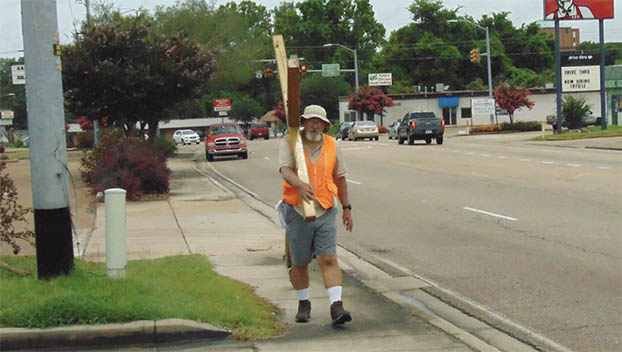 “And he said to them all, ‘If any man will come after me, let him deny himself, and take up his cross daily, and follow me.’”

On June 19, 2019, Mike Vail of Hot Springs, Ark., took up his cross as part of a mission to spread the Gospel to people across the United States, carrying it through different states in an effort to bring people closer to Christ.

“I built this cross,” Vail said as he took a break while walking through Vicksburg last wee. “I had a young man, a close, close friend and brother of mine, to anoint it. That afternoon, I led a young lady to Christ. It’s been this way ever since.

“I’m 66 years old. I had a quadruple bypass the year I built the cross. My least blockage was 85 percent. The doctor told my wife when I came out of surgery, ‘I’ve done all I can do,’” Vail said. “One year later, I walked eight miles with this cross in 100-degree weather. The Great Physician had done all he could do.”

Since then, Vail and his wife have spent a lot of time on the road, living in an RV 20 weeks out of the year with his ministry, KMV Ministries, a nonprofit Christian organization that works to tell people about Christ and get people to accept him as their savior.

“My destination is wherever God sends me,” he said.

“This is a Mississippi tour,” he said. “We did a Louisiana loop last month. We do one (state tour) on the first of each month; about a 15-day trip. We went to Louisiana and ended up in New Orleans, and then worked our way back up Louisiana. This trip, we went to Tupelo, West Point, Hattiesburg and then here to Vicksburg.”

So far, he has carried his cross through four states.

“Next month, we will be traveling to Tennessee, which will be our fifth state,” he said.