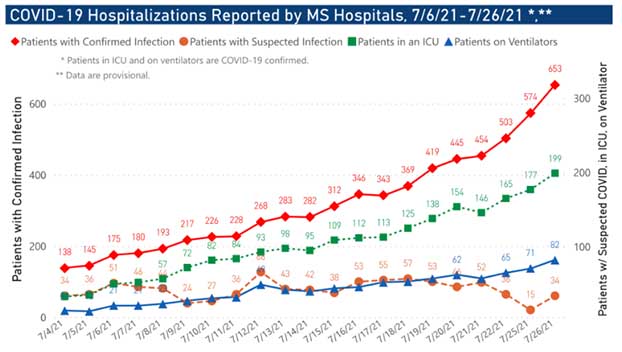 Through Monday, state records indicate nearly 700 patients were hospitalized with either confirmed COVID or suspected COVID that had not been test-confirmed yet. Of those, 653 were confirmed and 34 suspected.

Patients in ICU rooms were 199, a huge increase in the last few weeks. By comparison on July 4, only 33 COVID patients were in state ICUs.

“And we are seeing younger age groups as you can see as compared to last year the proportion of young individuals being hospitalized is a larger portion,” Dobbs said.

“The vast majority of the new cases are unvaccinated. Almost all cases are likely the Delta variant,” Dobbs said as he explained the rapid rise of new cases. “If you look at the slope of the curve it’s increasingly extremely rapidly.”

Dobbs said approximately 2 out of every 10 deaths in Mississippi recently have been in fully vaccinated people, but most of those are in older people, most of which have medical conditions that caused their immune system to be compromised.

“Our fully vaccinated deaths are people who are over 65, the median age is in the 70s,” Dobbs said. “And the majority of these folks have an underlying medical condition that makes them immunocompromised.”