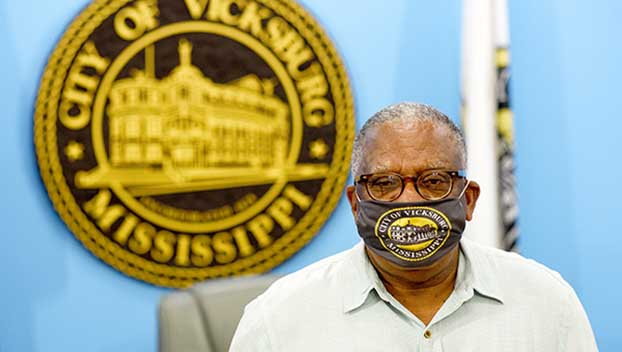 Vicksburg Mayor George Flaggs has done public service announcements on television and in his hometown newspaper urging his constituents to get the COVID-19 vaccination.

Unfortunately, Flaggs said, he did not heed his own advice. Now Flaggs, who said he is doing well recovering from the coronavirus, is redoubling his efforts to encourage people to get the COVID-19 vaccine.

“Absolutely, I am still encouraging people to get vaccinated,” Flaggs said Wednesday. “I was putting everybody else before myself. But it was indefensible for me not to get vaccinated. All I can do now is encourage everyone to take the vaccine.”

Flaggs confirmed earlier this week he had tested positive for COVID-19. He said he first got sick while attending the Mississippi Municipal League’s annual conference from July 26-28 in Biloxi. The event hosts mayors and thousands of other elected officials from around the state. Flaggs said he took safeguards to try to ensure he did not infect anyone else.

The third term mayor and former state House member said he had a runny nose when he left for the convention, but it did not dawn on him it might be the early stages of the coronavirus.

“I did not pay that much attention to it,” he said of the runny nose.

But soon after getting to the conference, he said he began to get body aches and feel bad.

He said he stayed in his hotel room for about 30 hours after he began to feel ill and left to travel home after he was feeling better. Upon returning home, he immediately went to get tested. He said his first test came back negative, but a second test confirmed he had the coronavirus.

Flaggs said he was fortunate that he never was severely ill. He said he briefly ran a fever, had body aches and a headache. The 68-year-old mayor said he never lost his senses of taste or smell. Flaggs said he knows COVID-19 is serious and has had family members and friends who contracted the coronavirus and died.

“It is no joke,” he said. “It is serious. I have enough experience with it to know that. I should have gotten the vaccine.”

Flaggs said he will go back to the doctor Friday and anticipates returning to city hall Monday to resume his duties.

Attendees were urged to wear masks, though they were not mandated. Plus, reports indicate that hand sanitizer was readily available throughout the event and people were urged to socially distance.

Also during the past two weeks, thousands attended the Neshoba County Fair where attendees often stayed overnight in close contact in the cabins that line the fairgrounds.

The recent surge in cases — a seven day average of 115 cases in mid June to more than 2,800 cases reported on Wednesday — has created a quandary for organizers of events like the fair and the Municipal League conference. After being canceled last summer because of COVID-19, many events organizers, based on the dramatic drop in cases earlier this year and the availability of the vaccine, assumed it would be safe to return to near business as usual.