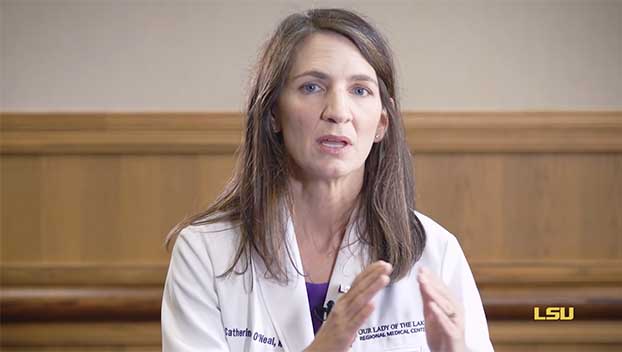 A Louisiana doctor and infectious disease expert who works at LSU brilliantly explained the dangers of the COVID-19 delta variant and explains the years of research that went into the mRNA vaccines in a video the university released last week.

Dr. Catherine O’Neal is the chief medical officer of the Our Lady of the Lake hospital system in Baton Rouge, Louisana, and serves as assistant professor of infectious disease at LSU Health New Orleans.

“Unfortunately, the delta variant has proved us wrong. This year’s virus holds on more tightly, infects you more deeply and is making young people sick,” she said.

On the day of the filming, O’Neal said, Our Lady of the Lake had many children in the hospital with COVID-19

“Today, 11 children are admitted to our children’s hospital,” she said. “Children who were healthy before they came in the doors.”

“That’s you. Those are people who look and act just like you,” she said. “And they were living their normal lives two weeks ago. This delta variant is going to affect us all very differently.”

O’Neal explained that the only way out of the pandemic without the high likelihood of additional variants is for more people to get vaccinated.

“There are so many people who have said that this vaccine is too new. They don’t want to take it because it got developed so quickly,” she said. “It’s really interesting as a scientist to hear that because nothing that we do is quick.”

She said scientists were ecstatic when the vaccine trials were proven so successful.

“We all gave each other high-fives and couldn’t believe the success of a person’s lifetime of work with mRNA vaccines, ready, just in time for the pandemic,” O’Neal said. “When I think about preparing all those years with mRNA vaccines, which are 15 to 20 years in the making, and a person’s lifetime of research, just in time for this, I think about our team.

“I think about elite athletes, who work their whole lives to get to the National Championship and play the best game of their lives,” she said. “And for those of us who are the average sports fan, we actually think it was just that season’s practice that got them there.”

“Absolutely not,” she said. “It was the first person who put a ball in their hand when they were 3-years-old. T

“They have been practicing and working every single day, not just that season. And that’s what this COVID-19 vaccine is. We have been working for decades to make sure that when we had a pandemic, we took it out of our back pocket and we said, ‘We’re ready.’ We should be proud of this. We were ready.”

To watch the video in its entirety see below:

Mississippians will ‘absolutely’ die due to lack of care…