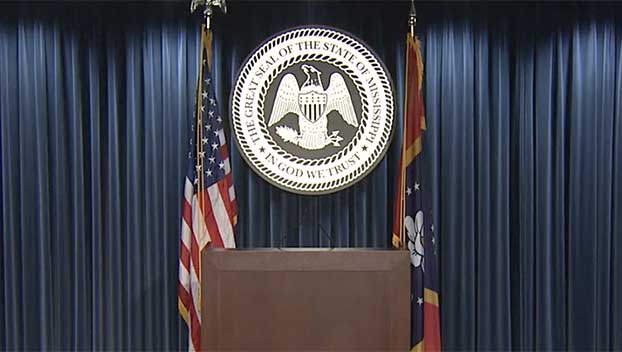 Every intensive care unit bed in Mississippi is full, and hospital leaders are begging — praying — for relief. Thousands of Mississippi students are going back to class without masks, and several schools have had to shut down after immediate COVID-19 outbreaks. Government leaders fear the effects if a critical state of emergency order expires as scheduled next week.

Nearly everyone in the state — medical, government and education leaders and voters on the political right and left — is asking: Where is our governor?

Gov. Tate Reeves is holed up most days at the Governor’s Mansion, according to people close to the governor. Reeves, who has defiantly rejected issuing any new statewide orders, has isolated himself from many of his closest advisers in recent weeks. He’s holding no press conferences, decidedly not making himself available to the public as he did earlier in the pandemic. Right now, as the crisis reaches its biggest inflection point, he’s out of state at a Republican Governors Association candidate conference.

His penthouse Sillers Building office, where governors traditionally work, has been rarely used since he took office in 2020. And as the crisis mounts, Reeves is hemorrhaging staff. Since Mississippi Today reported in late June that Reeves has lost four senior staffers and several policy staff since he took office in 2020, four additional staffers have left his office.

Liz Welch, his interim chief of staff and well-regarded state government veteran, is splitting duties, working mostly from the Woolfolk Building as she continues to run the Department of Finance and Administration. Prominent officials who are desperately trying to get in touch with Reeves are reaching out to David Maron, the governor’s chief counsel and deputy chief of staff who had never previously worked in state government.

When asked who Reeves has been taking advice from in recent weeks, the name that several people close to the governor brought up most consistently is Brad Todd, a political consultant who works in suburban Washington, D.C. Todd, a nationally-known politico who helped run the campaigns of former Louisiana Gov. Bobby Jindal, U.S. Sen. Josh Hawley of Missouri and U.S. Sen. Rick Scott of Florida, has managed Reeves’ campaigns dating back to his treasurer’s race in 2003.

The best explanation that anyone can come up with for Reeves’ continued absence during the crisis and why he’s listening closely to Todd’s counsel: politics. Reeves is receiving relentless criticism from seemingly every quarter in Mississippi. He’s flip-flopped many times depending on the politics of the moment, and nothing he does or says seems to land with any base or constituency.

The wunderkind who has quickly risen the ranks because of his ability to read the state’s political winds is seeing that those winds are swirling. So, too, is he during the worst days of this crisis.

Reeves’ previous public statements about the pandemic are so strikingly different from his statements today that they could be coming from a different politician.

A year ago, as schools were going back into session and a second COVID-19 wave was growing, Reeves issued statewide mask mandates, saying masks were “important not only to protect oneself, but also to avoid unknowingly harming our fellow Mississippians through asymptomatic community transmission of COVID-19” and “the key to reducing transmission of the virus.”

The past two weeks, though, as the politics of mask-wearing and other COVID-19 orders are as volatile as ever, Reeves has capitulated. He’s gone out of his way to cast doubt on the recommendations of medical professionals in public forums and sow distrust in policies he previously enacted himself.

“The change in the CDC’s mask guidance is foolish and harmful and it reeks of political panic to appear that they are in control,” Reeves said during his speech at the Neshoba County Fair in late July. “It has nothing to do with rational science … In Mississippi, we believe in freedom.”

A year ago, Reeves consistently defended his COVID-19 policies with talk of keeping the state’s hospital system above water during peaks of virus cases.

Today, the Mississippi healthcare system Reeves claimed he wanted to protect a year ago is failing because of the state’s debilitating COVID caseload, and he has barricaded himself in the Mansion and has made little contact with the public.

Health care experts say the vaccine is the quickest, most effective way to defeat COVID-19 and save lives. Reeves, however, has worked hard to have vaccine policy both ways. He has seen and heard the disagreement and the conspiracy theories, and, knowing much of it is being spawned on his side of the political aisle, has avoided decisiveness.

The response to his carefully-worded post shows how divided Mississippians are: Many people panned Reeves for not doing enough to encourage mass vaccination, and others criticized him for being too hands-on and preaching to them. And if politics are dictating Reeves’ actions (or inactions) right now, it’s important to highlight recent reporting that Reeves could have at least one formidable 2023 challenger for governor in Republican Speaker of the House Philip Gunn.

So many Mississippians are scared, tired and as divided as ever, and are now at the precipice of what appears to be another few weeks of difficult changes. They’ve lost friends and family members, personal time and life experiences, and it’s likely they’ll lose even more.

In other states, including neighbors run by Republicans, governors are leading. They’re facing the tough politics head-on and providing a steady hand and a clear message: Get the vaccine, wear masks in public, look out for your neighbors. By going underground the past few weeks, Reeves has left a vacuum of leadership that stands to greatly increase the likelihood that the virus will harm many more Mississippians and continue to overload the state’s hospitals.

As criticism of Reeves grows during this phase of the pandemic, fewer people are seemingly coming to the governor’s defense. Alan Lange, a conservative commentator and longtime close political ally of Reeves, recently took to Twitter to critique Sun Herald reporter Anita Lee’s analysis about the governor’s recent absence from the public sphere.

Lange’s tweet, published five days ago, has just one “like” — from the governor’s trusted political adviser Brad Todd.