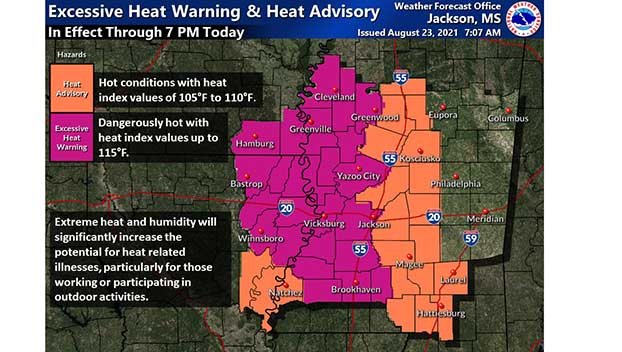 Cooling centers have opened in Mississippi’s capital city as a heat wave scorches temperatures in several states in the South and Midwest.

Heat advisories Monday cover parts of 10 states, including Kansas, Missouri and Illinois in the Midwest, according to the National Weather Service.

In the South, parts of Texas, Arkansas, Oklahoma, Louisiana and Mississippi were under heat advisories, as were slivers of Alabama, Florida, Tennessee and Kentucky.

In parts of Mississippi, the heat index could reach 115 degrees, forecasters said. The heat index is generally what the temperature will feel like to people.

“I was so happy to hit that air, it wasn’t funny,” said Linda Nolden, Jackson’s community service coordinator, who is managing one of the cooling centers that opened over the weekend.