Hurricane Ida likely to form in Gulf this weekend, Mississippi in predicted path of storm 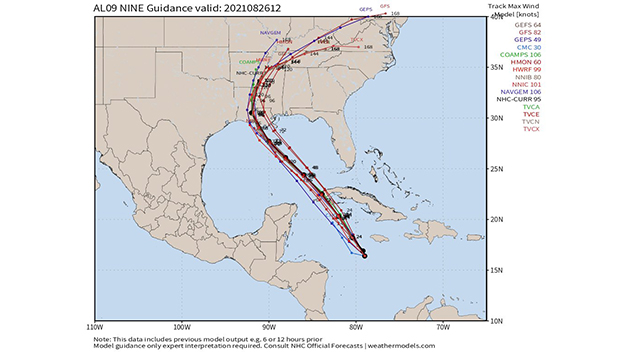 A tropical storm near Jamaica is expected to strengthen into a major hurricane before it reaches the Gulf Coast, threatening areas in Mississippi and Louisiana.

The 10 a.m. update from the National Hurricane Center predicts that Tropical Depression Nine will move over the Gulf of Mexico and strengthen into a hurricane before making landfall on the Louisiana coastline overnight Sunday into early Monday morning.

Once the system is in the Gulf this weekend, the storm could strengthen to a category 2 hurricane as early as Sunday evening.

The forecast cone released Thursday morning puts the storm hitting between the Texas-Louisiana line and the Alabama-Florida line.

If it turns into a Hurricane it would be named Ida.

The latest NHC forecast says the system is expected to enter into the Gulf of Mexico on Friday night and move northwest toward the central or northwestern U.S. Gulf Coast.

The storm could bring “dangerous impacts” including storm surge, wind and heavy rainfall to portions of the coasts of Texas, Louisiana, Mississippi, Alabama and the Florida Panhandle by Sunday and Monday, the National Weather Service in New Orleans said.