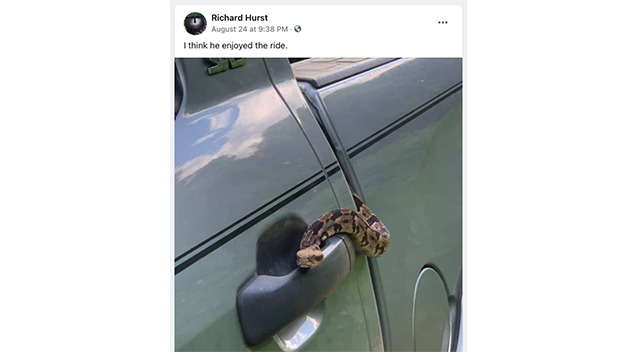 One Mississippi man found a quick way to send shivers slithering through social media when he posted the picture of timber rattler hanging out on his truck door handle.

Richard Hurst of North Mississippi said he was trying to do the three-foot snake a favor by transporting it to a remote location away from his driveway in Carroll County, where his wife found the snake.

Hurst posted the photo and told his story on the Mississippi Snake Forums and Identification Facebook group Tuesday.

“My wife found him in the driveway, which is a little too close to home,” Hurst wrote.

When asked how Hurst got the snake in his truck bed, Hurst said he “eased a long piece of cane under him and pick(ed) him up. He was calm and I probably could have pinned his head to pick him up but there’s no need in taking chances.”

Hurst said his plans to transport the snake to a wooded area a couple of miles from his house soon changed when the snake decided it wanted to be in a different spot.

The snake chose the driver’s side door as his new perch for watching the world go by during the drive.

“Aww he wanted a ride,” on person posted on the picture that has been shared nearly 100 times.

“Did he let his tongue hang out and flop in the wind?” one commenter posted jokingly.

“Hitchhiking is hard without thumbs,” another person posted.

“I think he enjoyed the ride,” Hurst wrote.

In hindsight, Hurst said he “should’ve found something to put him in for the ride, but it worked out fine and he’s away from people.”

Hurst didn’t mention how the snake was removed from the door handle.

Hurricane Ida likely to form in Gulf this weekend,…