All eyes on Hurricane Ida as she enters the Gulf, promises to be ‘life-altering storm’ for unprepared, meteorologist says 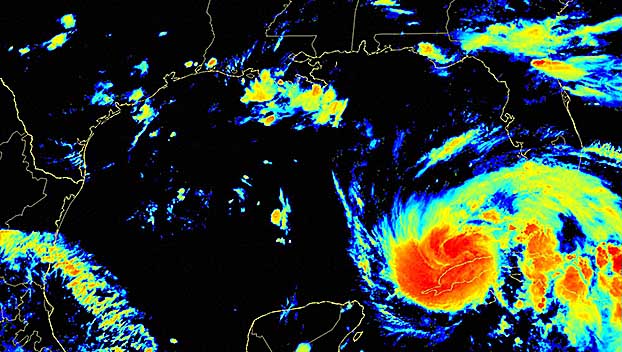 Hurricane Ida struck Cuba on Friday and threatened to slam into Louisiana with devastating force over the weekend, prompting evacuations in New Orleans and across the coastal region.

“This will be a life-altering storm for those who aren’t prepared,” National Weather Service meteorologist Benjamin Schott said during a Friday news conference with Louisiana Gov. John Bel Edwards.

The governor urged residents to quickly prepare, saying: “By nightfall tomorrow night, you need to be where you intend to be to ride out the storm.”

New Orleans Mayor LaToya Cantrell ordered a mandatory evacuation for a small area of the city outside the levee system. But with the storm intensifying so much over a short time, she said it wasn’t possible to do so for the entire city. That generally calls for using all lanes of some highways to leave the city.

“The city cannot order a mandatory evacuation because we don’t have the time.” Cantrell said.

City officials said residents need to be prepared for prolonged power outages, and asked elderly residents to consider evacuating. Collin Arnold, the city’s emergency management director, said the city could be under high winds for about ten hours.

Other areas across the coastal region were under a mix of voluntary and mandatory evacuations. The storm is expected to make landfall on the exact date Hurricane Katrina devastated a large swath of the Gulf Coast exactly 16 years earlier. Capt. Ross Eichorn, a fishing guide on the coast about 70 miles (112 kilometers) southwest of New Orleans, said he fears warm Gulf waters will “make a monster” out of Ida.

At the state’s largest hospital system, Ochsner Health System, officials ordered 10 days worth of fuel, food, drugs and other supplies and have backup fuel contracts for its generators. One positive was that the number of COVID-19 patients had dropped from 988 to 836 over the past week — a 15% decline.

An even greater danger will then begin over the Gulf, where forecasts were aligned in predicting Ida will strengthen very quickly into a major hurricane before landfall in the Mississippi River delta late Sunday, the hurricane center said.

If that forecast holds true, Ida would hit 16 years to the day that Hurricane Katrina made landfall as a Category 3 storm with 125 mph (201 kph) winds near the riverside community of Buras, just down the Mississippi River from New Orleans.

Saturday’s preseason NFL game between the Arizona Cardinals and the Saints at the Superdome was first moved up seven hours to avoid the weather, and then canceled altogether.

The hurricane center predicted the peak storm surge could reach 10 feet to 15 feet (3 to 4.5 meters) along the Louisiana coast, with a possible surge of 7 to 11 feet (2.1 to 3.4 meters) in the New Orleans area. The storm’s track put New Orleans on the eastern side — often called the dirty side — which generally sees much more significant effects than the western side.

“Being east of this storm’s track is not ideal,” said Arnold.

Curfew ordered in Mississippi city after 6-year-old among two…