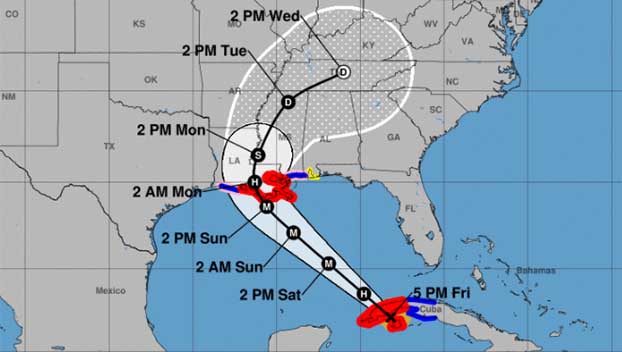 Hurricane Ida struck Cuba on Friday and threatened to slam into Louisiana with far greater force over the weekend, prompting New Orleans’ mayor to order everyone outside the protection of the city’s levees to evacuate.

Residents along Louisiana’s coast braced for Ida to bring destructive wind and rain on the exact date Hurricane Katrina devastated a large swath of the Gulf Coast exactly 16 years earlier. Capt. Ross Eichorn, a fishing guide on the coast about 70 miles (112 kilometers) southwest of New Orleans, said he fears warm Gulf waters will “make a monster” out of Ida.

New Orleans Mayor LaToya Cantrell ordered the evacuation of everyone living outside the levee system that protects the area from flooding. She did not say how many people lived there, but urged residents with medical conditions and other special needs to get out early.

Officials warned they plan to close floodgates Saturday afternoon on two highways near New Orleans, increasing the sense of urgency for those planning to flee.

“Now is the time,” Cantrell said.

If that forecast holds true, Ida would hit on the 16th anniversary of Katrina’s landfall as a Category 3 storm with 125 mph (201 kph) winds near the riverside community of Buras in Plaquemines Parish, just down the Mississippi from New Orleans.

Kickoff for Saturday’s preseason game between the Arizona Cardinals and the Saints at the Superdome was moved up seven hours to avoid the weather, to a noon Central Time start after consultation with city and federal officials and the National Weather Service.

An emergency declaration for the state of Louisiana were declared.

“Unfortunately, all of Louisiana’s coastline is currently in the forecast cone” for the storm, said Gov. John Bel Edwards.

A hurricane watch was in effect from Cameron, Louisiana, to the Mississippi-Alabama border — including Lake Pontchartrain, Lake Maurepas and metropolitan New Orleans.

The mandatory evacuation outside New Orleans levees was prompted by storm surge predictions of 7 to 11 feet (2.1 to 3.4 meters) in the area, said Collin Arnold, the city’s director of homeland security and emergency preparedness.

“Being east of this storm’s track is not ideal,” Arnold said. “We’re anticipating significant impacts, including tropical storm-force or stronger winds that could cause downed trees and prolonged power outages. Heavy rain in excess of 10 inches — now that’s over a day or two — could cause significant street flooding.”

By the time it reaches the central Gulf Coast Sunday, it could dump 8 to 16 inches (20 to 40 centimeters) of rain, with 20 inches (50 centimeters) in isolated areas, from southeast Louisiana to coastal Mississippi and Alabama through Monday morning.

‘Something in me just doesn’t work. I’ve always had…