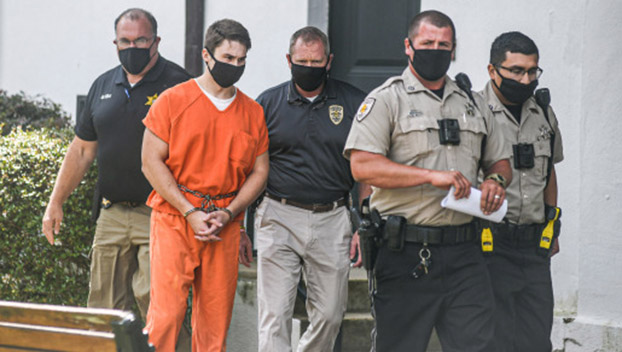 Brandon Theesfeld is led from the Lafayette County Courthouse in Oxford, Miss. on Friday, August 27, 2021, after he pleaded guilty to first degree murder in the August 2019 death of Alexandria 'Ally' Kostial of St. Louis, Mo. (©Bruce Newman)

During Friday’s hearing where Brandon Theesfeld pleaded guilty to first degree murder and admitted to shooting Alexandria ‘Ally’ Kostial multiple times, details emerged of how Theesfeld and Kostial met and how Theesfeld planned and carried out her murder.

During the hearing, assistant district attorney Mickey Mallette read aloud the State’s evidence and presented the facts of what let to Kostial’s murder in the early morning hours of July 20, 2019.

Mallette stated that the evidence showed Kostial and Theesfeld met at the University of Mississippi and that their friendship would turn romantic from “time to time.”

On April 12, 2019, Kostial informed Theesfeld she was concerned she might be pregnant and two days later sent him a photo of an inconclusive home pregnancy test. She wanted to get together with Theesfeld and talk in person about the potential pregnancy.

According to Mallette, Theesfeld’s internet search history during this period of time revealed he searched for abortion pills and abortion services.

The two’s contact became “exclusively electronic” at that time, according to Mallette, and over the next three months Kostial “pursued” an in-person meeting with Theesfeld. He agreed to meet but would fail to show up or back out at the last minute for various reasons.

In early July of that year, Kostial’s request to meet with Theesfeld became more frequent and urgent. On July 12, Theesfeld informed Kostial through text messages that he did not want to talk and that she should just get an appointment and that talking wasn’t necessary.

On the same day, Theesfeld left Oxford for Dallas-Fort Worth area where his father, Daniel Robert Theesfeld, lived.

Two days later, Theesfeld posted a photo on social media of a Glock model 22 .40 caliber pistol with the caption, “Finally taking my baby back to Oxford.” According to the evidence presented, the pistol was purchased by Theesfeld’s father.

On the same day he posted the photo of the pistol, Theesfeld also searched the internet for silencers and suppressors for that model of gun.

Theesfeld traveled back to Texas on July 16, 2019 at approximately 6:30 p.m. His internet history on that day included searches for hollow tip ammunition, tactical face masks and how convicted serial killer Ted Bundy lured victims, according to the State’s evidence.

The following day, Theesfeld returned to Oxford with the pistol and marks the first time he initiates a message to Kostial, asking to meet. Up to that point, Theesfeld had been against meeting in person.

Kostial informed Theesfeld she was going out that evening and at 9:06 p.m. he texted her back, asking her to let him know when she was home, because her house was private.

At 11:52 p.m., Kostial is last seen on a surveillance camera leaving a bar on the Downtown Square. She takes an Uber who takes her home where she arrives safely at 12:10 a.m.

At 12:46 a.m. on July 20, Theesfeld’s truck is seen on video traveling on West Oxford Loop towards Kostial’s residence at The Retreat. At 1:14 a.m., his truck is seen once again on camera at the same location, driving the opposite direction.

Over the next 40 minutes, GPS location maps shows both Kostial and Theesfeld’s cell phones traveling through the City of Oxford towards the location near Sardis Lake where Kostial’s body was found hours later.

At approximately 2:15 a.m. to 2:30 a.m., a resident of South Sardis Lake heard gunshots. At 2:50 a.m., GPS data shows both cell phones traveling back towards Oxford and at 3:28 a.m., Theesfeld’s phone registers back inside the Oxford city limits. Theesfeld’s internet history also shows searches for how to listen to police scanners.

Roughly three hours later, GPS location data shows Kostial’s phone halfway between Batesville and Oxford on Highway 6 and at 6:45 a.m., Theesfeld is shown on video at a convenient store in Batesville in his truck. Two minutes laters, Kostial’s phone was in the same location.

Theesfeld then texted someone at 7:56 a.m., asking if he could come over to their place because there was an exterminator at his house doing service. The State’s evidence revealed that after talking to the apartment manager where Theesfeld lived, that information was determined to be false.

At 8:18 a.m., Theesfeld then searches for “Sardis, Mississippi news.”

Over the next few hours, GPS data showed Kostial’s phone to be in similar locations at similar times in Batesville, Memphis and back to Oxford. At approximately 9:58 a.m., Theesfeld arrived at his friend’s apartment where he stayed until approximately 1:28 p.m.

Just before 10:30 a.m., Kostial’s body is discovered by deputies of the Lafayette County Sheriff’s Department on routine patrol near the Buford Ridge area of Harmontown. At the scene, 11 .40 caliber shell casings were found. Kostial’s purse was found about one-third of a mile away from the scene.

Ballistics tests confirmed the shell casings and the bullets found inside Kostial’s body matched the pistol Theesfeld brought back to Oxford form Texas.

The last GPS transmission from Kostial’s phone was at 1:28 p.m. on July 20 in an area behind Waller Funeral Home in Oxford.

On July 21, Theesfeld texted another friend asking if he could come over due to exterminators at his apartment — the evidence showed this was once again false. Theesfeld arrived later that afternoon, still in possession of the pistol which was seen by his friend.

Law enforcement officers contacted Theesfeld on the same day, asking if he could come and speak with them. Theesfeld agreed but failed to appear. Officers then called Theesfeld back, who informed them he had been drinking and did not want to come and talk while intoxicated. He agreed to come in early the next morning, July 22, but once again failed appear.

Theesfeld was then apprehended later that day at a gas station in South Memphis, still in possession of the pistol.

During the investigation at his apartment, a legal pad was found that contained a two-page handwritten letter by Theesfeld to his family.

“I’m not a good person. It is not your fault,” The letter read. “Something in me just doesn’t work. I’ve always had terrible thoughts. I’ve always had these feelings. I just kind of felt off. I think this is the end for me. I’m either going to prison or going to die. I know I’m going to get caught.”