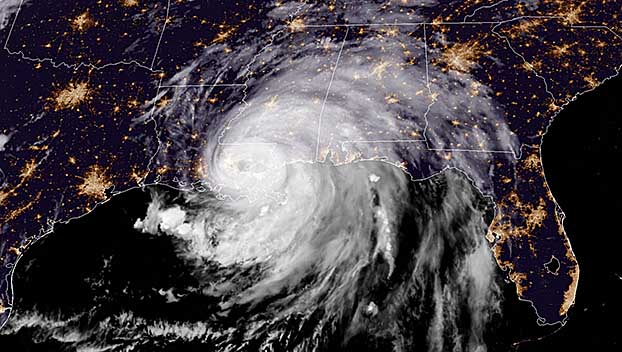 Hurricane Ida blasted ashore Sunday as one of the most powerful storms ever to hit the U.S., knocking out power to all of New Orleans, blowing roofs off buildings and reversing the flow of the Mississippi River as it rushed from the Louisiana coast into one of the nation’s most important industrial corridors.

The power outage in New Orleans heightened the city’s vulnerability to flooding and left hundreds of thousands of people without air conditioning and refrigeration in sweltering summer heat.

Ida — a Category 4 storm — hit on the same date Hurricane Katrina ravaged Louisiana and Mississippi 16 years earlier, coming ashore about 45 miles (72 kilometers) west of where Category 3 Katrina first struck land. Ida’s 150-mph (230 kph) winds tied it for the fifth-strongest hurricane to ever hit the mainland U.S. It dropped hours later to a Category 2 storm with maximum winds of 110 mph (175 kph) as it crawled inland, its eye about 30 miles (50 kilometers) west-northwest of New Orleans.

The rising ocean swamped the barrier island of Grand Isle as landfall came just to the west at Port Fourchon. Ida made a second landfall about two hours later near Galliano. The hurricane was churning through the far southern Louisiana wetlands, with the more than 2 million people living in and around New Orleans and Baton Rouge under threat.

“This is going to be much stronger than we usually see and, quite frankly, if you had to draw up the worst possible path for a hurricane in Louisiana, it would be something very, very close to what we’re seeing,” Gov. John Bel Edwards told The Associated Press.

People in Louisiana woke up to a monster storm after Ida’s top winds grew by 45 mph (72 kph) in five hours as the hurricane moved through some of the warmest ocean water in the world in the northern Gulf of Mexico.

The entire city of New Orleans late Sunday was without power, according to city officials. The city’s power supplier — Entergy — confirmed that the only power in the city was coming from generators, the city’s Office of Homeland Security & Emergency Preparedness said on Twitter. The message included a screen shot that cited “catastrophic transmission damage” for the power failure.

The city relies on Entergy for backup power for the pumps that remove storm water from city streets. Rain from Ida is expected to test that pump system.

More than 1 million customers were without power in two Southern states impacted by Ida — more than 930,000 in Louisiana and 28,000 in Mississippi, according to PowerOutage.US, which tracks outages nationwide.