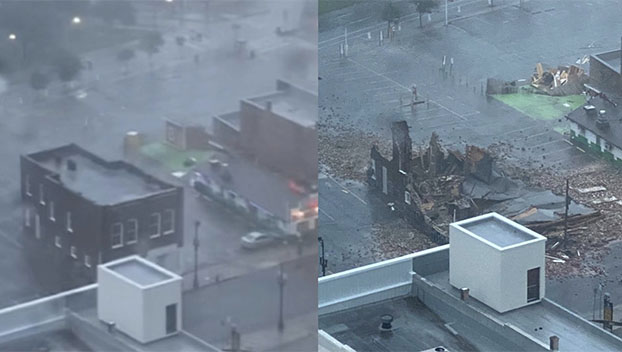 The former site of Karnofskys, a music shop where Armstrong was employed as a young man sat in rubble Monday morning.

The Karnofskys reportedly nurtured Armstrongs love for music and loaned him money for his first cornet. The Jewish tailor shop was later turned into one of New Orleans’ first jazz record stores.

The historic building at 427 S. Rampart St. is now a pile of bricks after a category 4 storm hit the City.

Fear the news from #Louisiana with sun up, but we #jazz lovers and #history buffs already mourn collapse of #Karnofsky museum in #NOLA, home of the family that raised #LouisArmstrong. https://t.co/I0wOgI2FHJ pic.twitter.com/aFgAci6wof

This is why I took before photos. Building got wiped out by #Ida #NOLA pic.twitter.com/z1sLf3I4Q2

As the light comes up, information becomes available…this collapsed building was a historic landmark. Louis Armstrong worked for the family that owned the music store, that helped him buy his first Clarinet. He grew up jamming in this building. My goodness. @TheJaniceMcD pic.twitter.com/nHCWHvi5gD

Data: Hurricane Ida was so strong it briefly reversed…