Data: Hurricane Ida was so strong it briefly reversed flow of the Mississippi River 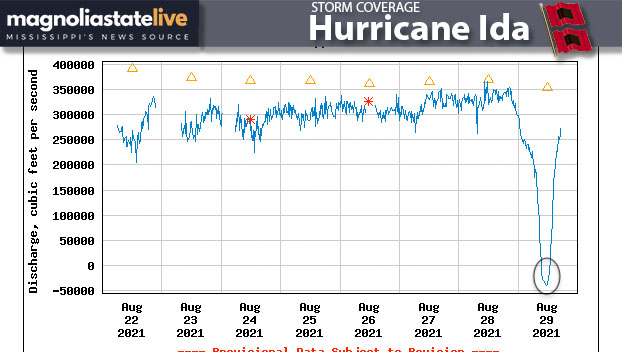 Hurricane Ida’s storm surge and winds were so strong that it stopped the flow of the Mississippi River and actually caused it to reverse.

Brian Olson, a geologist, posted a graph of the flow rate of the river at Belle Chase, 20 miles south of New Orleans.

For several hours today, the winds & storm surge from #HurricaneIda made the Mississippi River flow *backwards* (negative discharge rate in the graph). pic.twitter.com/vYunzSUL24

Scott Perrien, a hydrologist with the USGS Lower Mississippi Gulf Water Science Center in Baton Rouge, confirmed to CNN what Olson had posted on Twitter. Perrien said the indications are that the river level on Sunday rose about seven feet due to storm surge pushing up the river at the Belle Chase gauge.

During that time Perrien said the river slowed from about 2 feet per second to about a half a foot per second in the other direction, according the CNN report.

The gauge does not measure the flow of the entire river, so deeper portions of the river may not have reversed direction, Perrien said.

Read more from the CNN report at this link.

Thousands without power in Mississippi as Hurricane Ida —…