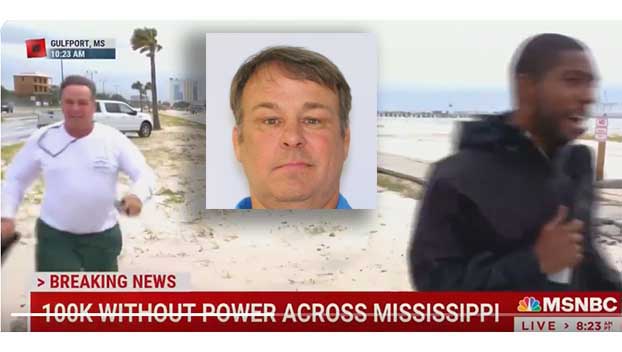 A man police say accosted a television reporter on Monday as the reporter covered Hurricane Ida’s impact has a criminal record including releasing dangerous chemicals into the environment in Ohio.

Gulfport Police identified the suspect as Benjamin Dagley of Wooster, Ohio, as the person recorded on a live report on MSNBC on Monday in which Dagley can be seen pulling his truck off the highway, jumping out and running up to reporter Shaquille Brewster screaming to cover the news accurately.

Police said they received information on Brewster’s identity from the public.

In August 2017, Bagley reportedly drilled holes into tanks containing chemicals including hydrochloric acid. One person was hospitalized in the incident. The incident took place at a plating business that Dagley once owned.

Dagley reportedly broke into the business and attacked a security guard.

Gulfport police said they believe Dagley left the area, but he’s been charged with two counts of simple assault, disturbing the peace and violating an emergency curfew.