Posts on social media show extent of highway collapse in Mississippi that killed 2, critically injured others 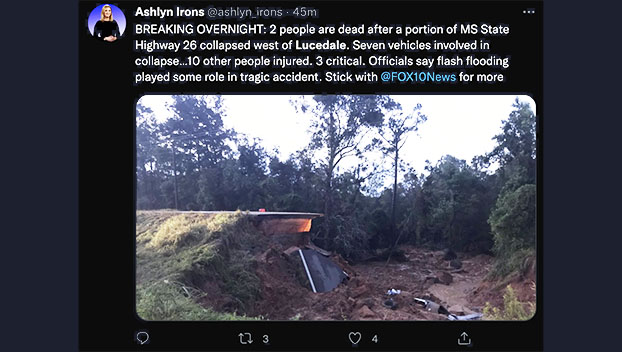 Early morning posts on social media from area news organizations that show the extent of the highway collapse in Lucedale:

We’re getting a closer look at the damage in Lucedale, Mississippi where Highway 26 completely collapsed near Cross Methodist Church. Two people were killed, 10 injured, three of those in critical condition. @mynbc15 pic.twitter.com/mSbOogb5Gg

On scene of a roadway collapse near Lucedale,MS that left two people dead and 10 others injured overnight. The road failure is being attributed to rushing water from #IDA. Live details all morning on @FoxNews pic.twitter.com/N6JaBoTw00

NEW VIDEO: Crews pull cars from ditch of collapsed road on Highway 26 near Lucedale. Two dead, 10 injured. This is grim, it’s heartbreaking, it’s scary. I can’t imagine being in a situation like that. Just more devastation stemming from #ida. @WKRG #mswx pic.twitter.com/U5gm6O9Ji9