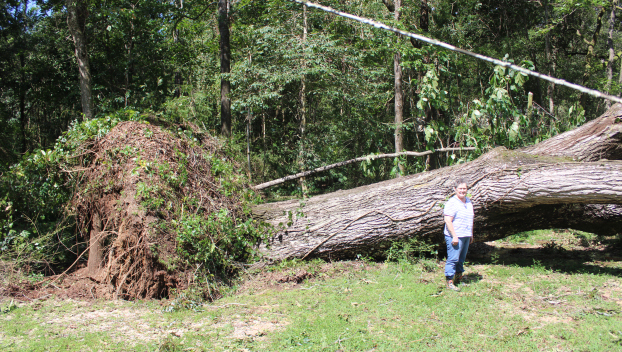 “I screamed and screamed, I couldn’t quit, I couldn’t believe it,” Wilma said when the tree came crashing down.

Wilma and Dave were in the living room when the tree fell. As it became uprooted, the oak tree fell over the side of the house.

When it did, the fallen tree demolished the front door and smashed their Ford truck that was parked in front of the house.

On its way down, the oak tree took out several other tress and a nearby power line leaving the Sims without electricity.

Neither Wilma nor Dave got hurt. They are now in the process of rebuilding the damages to their home caused by Hurricane Ida.

In Picayune, damage was also reported at St. Charles Borromeo Catholic Church in Picayune. At some point during the storm, a portion of the brick wall on the back of the church fell on to the neighboring rectory, damaging the roof and rear rooms of the home. No injuries were reported as a result of that incidents, and repairs are already underway.

in Pearl River County, Emergency Management Director Danny Manley said his office has received about 37 reports of homes or other structures being damaged due to the storm. Most of the damage reported has been minor and typically involves roof damage.