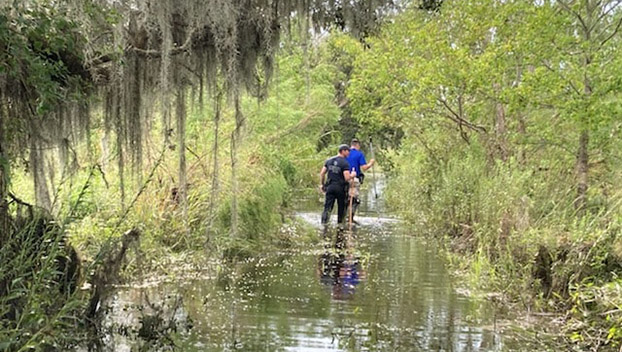 Louisiana officials have yet to locate the body of an elderly man was was apparently attacked and killed by an alligator as he was walking in floodwaters following Hurricane Ida.

Officials with the St. Tammany Parish Sheriff’s Office posted on social media Wednesday that Special Operations Division deputies, along with the Louisiana Department of Wildlife and Fisheries continue to search.

“Today S.O.D. deputies searched again along with a representative of Louisiana Search and Rescue and a K-9 trained in tracking scents. They are still searching at this moment,” the post said.

In the post, officials said others in the Avery Estates area where the man was killed have reported spotting an alligator lurking around their properties.

One commenter posted that an alligator was keeping a close watch on family members.

“This one watched my Dad closely when he waded out in the water to shut off their gas. Meanwhile Mom watched the gator. He also tried to climb the bird feeder pole. When I kayaked to Mom and Dad’s house, her first words to me was  ‘be careful there’s an alligator in the water.'”

Deputies said the attack happened on Monday in the Avery Estates subdivision off U.S. 90 in Slidell. A woman reported that she was inside her residence when she heard a commotion and went outside to see a large alligator attacking her husband. The woman then ran to rescue her husband. Once the attack stopped the woman dragged her husband out of the water and went to get first-aid supplies, according to deputies.

When she realized the severity of his injuries, she got in a boat to go fo help approximately a mile away. Presumably, the alligator had returned and took the man back into the water.

Deputies and other officials have been searching for the victim, but as of late Monday, all attempts have been futile.

“We are still doing all we can to locate the victim and are keeping his wife in our thoughts and prayers,” the post on Facebook said.