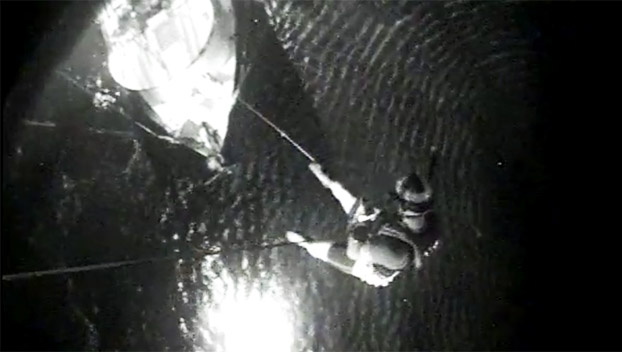 A crew member on a fishing vessel near Grand Isle, Louisiana, is in critical condition after he was attacked by a shark and had to be airlifted by a Coast Guard medevac team to a New Orleans hospital.

Coast Guard Sector New Orleans watchstanders received a call at 12:51 a.m. via VHF-FM channel 16 from personnel aboard the fishing vessel Moon Glow stating a 64-year-old male crew member had been attacked by a shark and sustained a severe leg injury.

The man had reportedly been untangling fishing nets from the vessel’s propeller when he fell overboard and was bitten by a shark of an unknown size and species. Crew members aboard the Moon Glow applied a tourniquet to the man’s partially amputated leg and radioed for help.

#BREAKING: A #USCG helicopter crew medevaced a shark attack victim from a fishing vessel 35 miles off #GrandIsle, LA, this morning. The man fell overboard while untangling fishing nets and was attacked by a shark. Read more: https://t.co/BUCY64zbCR pic.twitter.com/phHkWimTLz

Watchstanders consulted with the duty flight surgeon, who recommended a medevac. A Coast Guard Air Station New Orleans MH-65 Dolphin helicopter crew launched to the scene. When the helicopter crew arrived, a Coast Guard rescue swimmer administered first aid and applied a new tourniquet to the man’s leg. The crew hoisted the injured man and transported him to University Medical Center New Orleans in critical condition.