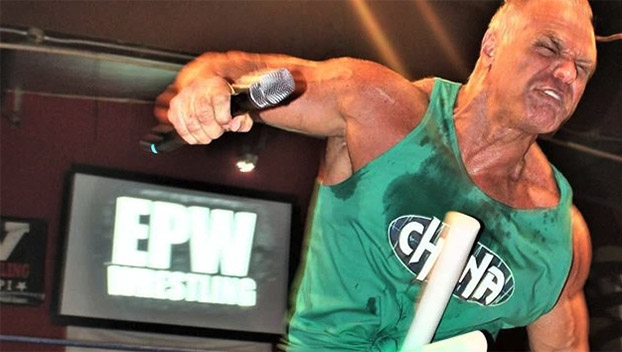 With the lights low, the chairs vacant and the ring empty, the nondescript metal building that houses Booneville-based EPW Wrestling seems almost … to be frank … unexciting.

But while the building might not look like much at 9:30 on a Tuesday morning, Neil Taylor, EPW Wrestling promoter, said it’s an entirely different beast on Saturday night.

“On Saturday nights, when it gets pretty full, and the lights are on – it kind of takes on a life of its own,” Taylor said.

Every weekend, a crowd of over 100 wrestling fans piles into that simple metal building to watch what Taylor believes is some of the finest … if not the finest … wrestling in the area. It’s a crowd that screams at the surprises and gasps at the twists, cheers for the faces and boos at the heels.

It’s a terrific audience, Taylor said. The best a guy running an independent wrestling promotion could ask for.

“They have come in when there was ice and snow on the ground; we had people come in when there were tornadoes in the area; man, we have one of the most loyal fan bases of any promotion that I know of around here, and I’ve been doing this forever,” he said. “They are the lifeblood of this place.”

In the coming weeks, Taylor’s hoping to expand that base. On Sunday, Sept. 12, EPW Wrestling will make its television premier on Tupelo-based station WTVA at 11 a.m. before moving to its regular weekly spot on Sunday mornings from 8:30 a.m. until 9 a.m. Spectators across the station’s viewing area will see all the bone-crunching action and melodramatic conflict Northeast Mississippi wrestling offers right from the comfort of their homes.

“We’re on right between church services,” Taylor said with a laugh.

A half-hour of ringside action might seem like an odd fit for a slot between Sunday morning services, but Taylor doesn’t think so. He grew up on Sunday morning matches that aired just after “He-Man and the Masters of the Universe.”

“I always turned it off when wrestling came on,” he said. “One Sunday morning, I left it on. I’ve been watching it ever since.”

That was over 35 years ago, and since then, Taylor has built much of his life and career around wrestling. He’s even done a bit of wrestling himself, although these days, most of his work is behind the scenes. He took over as EPW Wrestling’s promoter in 2018 and has strived to build it into something bigger and better ever since.

“We’ve just been trying to grow it,” he said. “There are so many indie promotions now … There’s no reason why the Tupelo area shouldn’t have a legit, bigger indie wrestling promotion.”

That’s where television comes in. Taylor’s hoping the weekly 30-minute programs, which he’s largely funding out of his own pocket, will introduce EPW’s cast of characters and their ongoing conflicts to a crowd who may not have even known their venue exists.

Each episode will feature a handful of short, intense matches, plus lots of backstage interview.

“It will be a lot like studio wrestling used to be,” Taylor said. Think the relatively family friendly “Golden Age” of WWF of the ’80s and ’90s.

They’ve already shot the content for the first three episodes of the show — nine matches in all — filmed in front of that raucous Saturday night crowd.

Over time, Taylor hopes to see the audience for EPW Wrestling outgrow the confines of their humble building, to make EPW synonymous with wrestling in Northeast Mississippi.

“I’d like to grow out of this building. We’d like to have shows in different places in the area,” he said. “I would love to see this thing with 500 to 600 people per show, or more.”

More than anything, Taylor would love to share the sense of excitement contained within that small building every Saturday night with as many people as possible.

“I just want to shine a positive light on wrestling,” he said. “That’s my end goal.”

The three-count, in other words.

Don’t look now but forecasters are watching another developing…