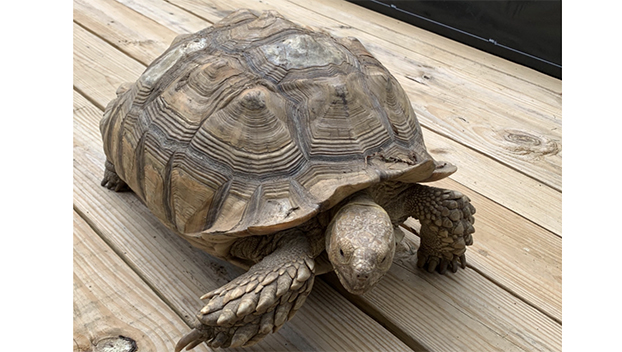 Terri the Sulcata Tortoise was returned to her caretakers, Dixie and Warren Ellis, on Sunday afternoon after going missing in the Porter’s Chapel area. (Photo by Mia Cowart)

When a tortoise owned by Dixie and Warren Ellis went missing on Friday in the Porter’s Chapel area, they posted an all-points bulletin on Facebook.

News began to spread and on Sunday, Terri the Tortoise was found in a nearby neighborhood by Robbie and Mia Cowart.

Cowart secured the large reptile in a trailer until the Ellises could come pick up their runaway.

“Terri,” Dixie called as she made her way to the trailer.

Dixie said the tortoise had been a rescue from the animal park in Delhi, La.

“We had said we wanted one if they ever needed a home for one of them, and they said ‘Take her if you want her,’” Dixie said.

Terri is a Sulcata Tortoise, also known as an African spurred tortoise, which is one of the largest tortoise species in the world. Sulcatas are native to the southern edge of the Sahara Desert in Africa.

“She avoids water since she is from the desert region,” Warren Ellis said.

Terri, who is unmistakable with her thick brownish-yellow shell and spurs on her legs, has been living in the couple’s back yard for the past five years. The tortoise measures about 2 feet across and weighs approximately 60 pounds.

The couple was not sure how old Terri was, but they did know she likes treats.

“She only comes when you have treats,” Dixie said, which are “collard greens, dandelion greens and the very occasional strawberry.”

Unfortunately, this was not the first time Terri has escaped.

“This was her second big adventure,” Dixie said. “She finds little weak spots in our fence and has been getting out. So, we put her in our old chicken coop and locked her up.”

But the escape artist got out anyway.

“She literally busted through the wire — like cut it and peeled her way through,” Dixie said. “She is going to have to go in the shop now.”

“Yeah, we are going to have to keep her in the shop until we can figure out how to secure her,” Warren said.

So, the shop it is for now.

Hopefully, Terri had a shell of a time on her last escapade.