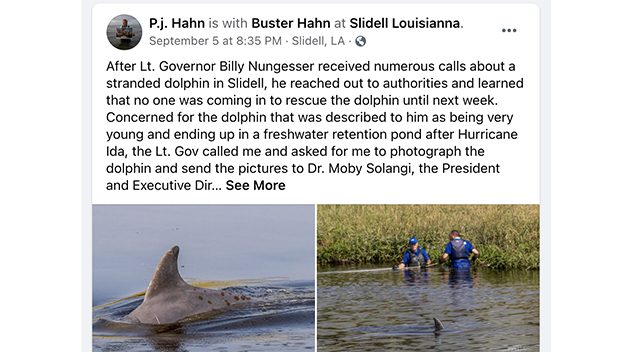 It wasn’t the Loch Ness monster, but for Louisiana residents the sight of a baby dolphin in a drainage canal was just as captivating.

After a week of being stranded, the baby dolphin — which had become a celebrity of sorts — was rescued from the Louisiana drainage canal and released into the Mississippi Sound.

The storm surge from Hurricane Ida likely separated the dolphin from its pod and sent it to a Slidell, Louisiana, drainage canal. Reports of the dolphin swimming in the canal have drawn onlookers from across the region, eager to spot the dolphin.

On Sunday a group of rescuers helped guide the dolphin toward a net, where he was gently loaded into the back of a van and assessed by a team of three veterinarians.

The van was then escorted by police cars — with intermittent sirens and flashing lights — to the Mississippi Sound near the Silver Slipper Casino. After taking blood samples, putting a satellite tag on him and confirming that he was healthy, the team released him about 200 yards out, where the water was more than four feet deep.

The rescue was performed by the Southeast Region Marine Mammal Stranding Network, a National Oceanic and Atmospheric Administration offshoot that includes the SeaWorld team, the Audubon Institute and others.

To read more about the dolphin and its rescue read this report on Nola.com.