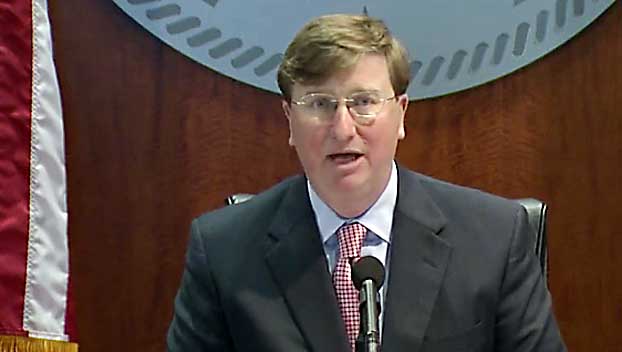 Mississippi Gov. Tate Reeves said Friday that Democratic President Joe Biden’s new federal vaccine requirements are “clearly unconstitutional” and said he believes Biden issued the mandate to try to distract the world from the fallout over his decision to withdraw U.S. troops from Afghanistan.

“This is the same bait and switch. The president wants us to be talking about anything but Afghanistan,” the Republican governor said at a news conference outside the Governor’s Mansion in Jackson. “He wants us to talk about anything but Afghanistan, and sadly, he’s willing to trample on the rights of 100 million Americans to try to help himself politically. That, to me, is disgusting.”

Biden’s sweeping new federal vaccine requirements announced Thursday mandate that all employers with more than 100 workers require them to be vaccinated or test for the virus weekly, affecting about 80 million Americans. And the roughly 17 million workers at health facilities that receive federal Medicare or Medicaid also will have to be fully vaccinated.

Reeves called the requirements tyrannical and said a member of the executive branch does not have the authority to mandate that workers be vaccinated.

“It’s clearly unconstitutional for the president, to unilaterally with one signature, decide something of this magnitude,” he said.

“Every person in America should be scared to death of what this President is trying to do,” he continued. “You know, every tyrant in history has said that what they were trying to do was because it was in the best interest of the people.”

He said he expects the U.S. Supreme Court to strike down the requirement and said Mississippi will join other states in filing a lawsuit. He called it “an attack on hard-working Americans.”

“In essence, what the president saying is… hard-working Americans — many of whom work here and live here in Mississippi — hard-working Mississippians have to choose between either injecting themselves with something and potentially having the ability to earn a living to produce food for their family,” he said. “That’s a ridiculous choice.”

Reeves said he made the decision to get the shot and encourages Mississippi residents to do the same.

“But if he has the ability to unilaterally do this, then there is no limit on the powers of the presidency,” he said. “That’s not called a true democracy. That is tyranny — and we do not want that in America.”

Mississippi is among the least vaccinated states, with 41% of residents fully vaccinated, according to the Mississippi State Department of Health.

Reeves on Friday also announced that he will expand Mississippi’s COVID-19 state of emergency for an additional 30 days. He said the extension will ease the process of marshaling additional resources, like healthcare workers, to help the state fight the virus. It will also allow the governor to call on the keep Mississippi National Guard for aid, if necessary.

Mississippi man accused of beating horse, riding it until…