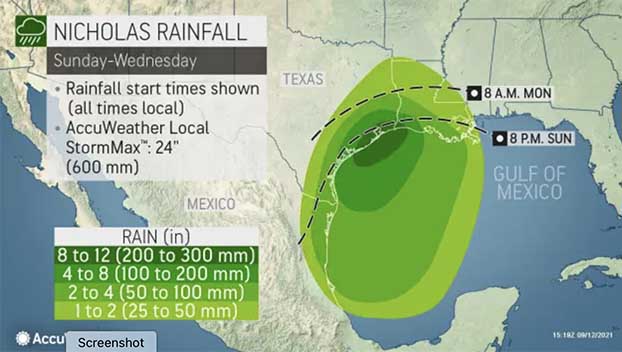 After violent Hurricane Ida struck the Gulf Coast in late August and Tropical Storm Mindy sped onshore the Florida Panhandle last week, as AccuWeather forecasters accurately predicted Tropical Storm Nicholas has formed in the Gulf of Mexico as of Sunday morning, taking aim at coastal Texas. Nicholas is expected to bring flooding downpours from northeastern Mexico to New Orleans, with the most significant flooding focused on the Houston area.

As of 11 a.m. EDT Sunday, Nicholas was located about 130 miles (205 km) northeast of Veracruz, Mexico, and 405 miles (650 km) south-southeast of the mouth of the Rio Grande River. The storm had maximum sustained winds of 40 mph and was moving to the north-northwest at a speed of 13 mph (20 km/h). Tropical-storm-force winds extended outward up to 105 miles (165 km) from the center of Nicholas.

A tropical storm warning is in effect for the coast of Texas from the mouth of the Rio Grande to Port Aransas, the National Hurricane Center (NHC) said.

Forecasters were closely watching a tropical wave as it drifted through the western Caribbean on Friday. It then crossed into the southern Gulf of Mexico earlier in the weekend where it organized into a tropical storm Sunday morning. Nicholas is now the 14th named storm of the 2021 Atlantic Hurricane season.

“As Tropical Storm Nicholas continues to move over the southwestern Gulf of Mexico, it will continue to drift towards the north, remaining a tropical storm through Monday,” said AccuWeather Senior Meteorologist Rob Miller. Wind shear remains an inhibiting factor for Nicholas to strengthen into a hurricane, according to Miller.

Wind shear is the change in direction and speed of winds at increasing heights in the atmosphere. When strong wind shear is present, the top of a tropical system can be blown hundreds of miles downstream and the system could become very lopsided or tilted.

Nicholas will continue to ride northward past Tampico, Mexico as a tropical storm, bringing a flood and wind threat to coastal Mexico.

“The shear is expected to lessen a bit tomorrow, which may allow the system to continue to strengthen from a weak tropical storm into a strong tropical storm,” added Miller.

“Because of the limited amount of time the system is likely to spend over warm Gulf of Mexico waters, it is unlikely for Tropical Storm Nicholas to become too strong, and thus it is not expected to reach hurricane strength,” said AccuWeather Meteorologist Ryan Adamson.

Nicholas is forecast to make landfall on the Texas coast, between Corpus Christi and Galveston, Texas, on Tuesday as a tropical storm. It can bring impacts to the Gulf Coast long before landfall, though. Due to the system’s slow, curved path, heavy rain will be the biggest threat, though high winds are possible as well making the storm a 1 on the AccuWeather RealImpact™ Scale for the U.S.

Stormy weather is expected across most of the region on Sunday, including in Houston as well as New Orleans, Lafayette, and Lake Charles, Louisiana, on Sunday afternoon.

“Some rain from Nicholas will reach coastal Texas on Sunday afternoon, well ahead of the storm, with the storm itself impacting southeastern Texas on Monday night into Tuesday,” said Miller.

Rain from Nicholas itself will mark the start of an extremely wet event. While New Orleans, which was greatly impacted by Ida, can expect only 1 to 2 inches of rain total, Houston is set to receive 8 to 12 inches, with an AccuWeather Local StormMax™ of 24 inches nearby.

“Areas from Galveston to Port Arthur, Texas, are forecast to get the heaviest rain,” said Miller.

Though most of the areas hard hit by Ida will have more minor impacts, some of the same locations impacted by hurricanes Laura and Delta last year will want to keep a sharp eye on the forecast.

“Both Laura and Delta made landfall in southwestern Louisiana only 13 miles apart and within 43 days of each other,” said Adamson. Laura struck as a Category 4 hurricane on Aug. 27, while Delta arrived as a Category 2 hurricane on Oct. 9.

Flooding could also occur where rain has been plentiful lately, including Victoria, Texas, and Lake Charles.

“Both Victoria and Lake Charles picked up more than 20 inches of rain this past May, which was four times that of average,” Adamson explained. Despite less extreme rain since then, rainfall has remained above average throughout the summer and flooding could be much easier in these spots. 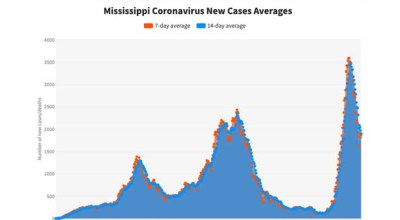 Mississippi mother’s pleas for justice 2020 murder of her…