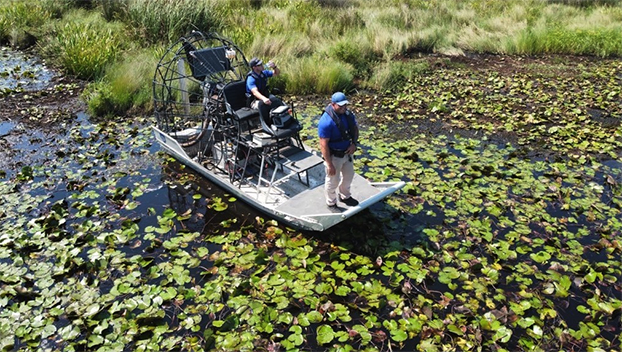 Two weeks after a Louisiana man was attacked by an alligator outside his house, officials say they have captured the 500-pound, 12-foot-long reptile they believe killed the man.

St. Tammany Parish officials say they have captured the gator in the Avery Estates neighborhood in Slidell, near where Timothy Satterlee, Sr. was last after being attacked by the alligator.

“This past weekend U.S. Wildlife agents observed a large alligator in a waterway near where the incident occurred. Deputies and agents, with the assistance of two Louisiana Department of Wildlife licensed nuisance hunters, Phillip Mc Clurke and Eric Dumas, set traps to catch the alligator. The alligator was caught this morning by one of the traps and brought to a secure sight to be searched,” a post on social media said.

A post from the St. Sheriff’s Office said the alligator had human remains in its stomach. Investigators will work with the St. Tammany Parish Coroner’s Office to verify those remains belong to Satterlee, the post said.

Deputies said the attack happened on Aug. 30 in the subdivision off of U.S. 90 in Slidell. A woman reported that she was inside her residence when she heard a commotion and went outside to see a large alligator attacking Satterlee, her husband. The woman then ran to rescue Satterlee. Once the attack stopped the woman dragged Satterlee out of the water and went to get first-aid supplies, according to deputies.

When she realized the severity of his injuries, she got in a boat to go for help approximately a mile away. Presumably, the alligator had returned and took Satterlee back into the water.

Deputies and other officials had been searching for the Satterlee since the attack.