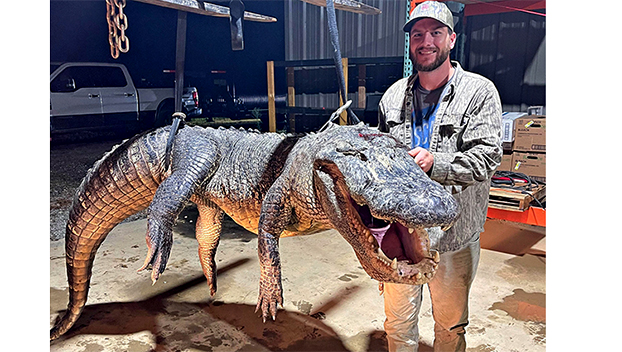 Ty Powell has a problem.

The Columbia resident wanted an alligator head from his first hunt as a unique trophy for his office, and got it. Now he might need a bigger office.

“I wanted a gator head to put in my work office, on my desk, and I might have messed up and got one too big,” Powell said with a laugh.

Powell and his hunting party pulled a gator measuring 13 feet, 2 inches and weighing 787 pounds from the Yazoo River near Redwood on Aug. 29. It was a little short of a state record, but provided Powell with the story of a lifetime and gave him a measure of international fame.

The story was picked up by USA Today, as well as media outlets in the United Kingdom and Australia.

“I’ve never really had anything like this happen, with newspapers calling and all that. It’s nice. I’m enjoying it. It’s been pretty awesome to tell the story and retell it,” Powell said. “The thoughts of that night will forever be etched in my brain. I don’t think I can ever forget it after telling the story that many times.”

The story began earlier this summer when Powell entered his name into the lottery for one of 920 alligator permits from the Mississippi Department of Wildlife, Fisheries and Parks. He not only won a permit, but got one for the West Central zone that includes the northern half of Warren County as well as Sharkey and Issaquena counties. That part of Mississippi has regularly produced some of the state’s biggest gators since the MDWFP sanctioned an alligator season in 2005.

Powell said he applied for the West Central zone because of its reputation for producing big alligators, and because he belongs to a hunting camp in Anguilla.

Powell and four other friends “got their feet wet” by bagging a 7-foot gator on Friday, Aug. 27. Three members of the party had to return home to the coast, however, so the next night Powell and his friend Eli Frierson hooked up with another group containing Adam Steen and Bubba Steen of Ethel, and Kent Britton of Poplar Creek.

Britton and the Steens are work friends of Frierson. Their group had taken down a 12-footer that Friday night, and located another large gator while scouting the Yazoo River earlier in August.

They set out in two boats just after dark on Saturday, Aug. 28. Powell said that, as a novice, he was content to follow the lead of Britton and the Steens as they passed about a dozen gators on the way to where the bigger one lived.

“I’m the guy holding two tags in the boat and seeing what happens,” Powell said.

Around 10 p.m., the group spotted the gator they were after. They waited about an hour for it to surface, and after one of the team members hooked the gator with a rod and reel, the battle began in earnest.

“Fast forward to about midnight and we got another hook on him. Each boat hooked him with two lines. Then I got my line on him, so we had three reels in him,” Powell said, before adding with a chuckle, “At that point we’re feeling pretty confident.”

The confidence lasted until the alligator showed its full fury and emerged from the water. It was the first time Powell and his crew got a good look at exactly what they were dealing with — an 800-pound beast, nearly as big as their boats, fighting for its life.

“He came up from the bottom so fast that half of his body came out of the water. That was our ‘Oh my God moment,’ when we could get a good look at him,” Powell said. “We all looked around at each other and said, ‘Fellas, this gator is a lot bigger than we thought.’”

The battle continued for another hour. Powell’s reel broke and another fishing rod snapped in half. The gator submerged itself in the river, and the team was content to let it stay there for a while. Finally, it came back up and the hunters finished the fight.

“We were sitting there praying at that moment,” Powell said of the rod and reels breaking. “We let him walk around on the bottom until he got tired out. Probably about 1:15 he finally got tired out and we got him up to the boat. We got a hand line on him and were able to shoot him. For an hour and 15 minutes, we fought him with three lines in him and he ran us up and down the river.”

After dispatching the gator, the hunters celebrated — until they realized there was still another act to the saga.

“We all high-fived and said this is awesome, we’re going to have gator shoes — and then it was, ‘How are we going to get this thing in the boat?” Powell laughed.

The battle to pull the beast into the boat took another 30 minutes, and nearly ended in disaster.

“I’m about 205 pounds and the other two guys in the boat are heavier than me. And we had a big Yeti ice chest full of ice and drinks. We all got on one side of the boat and he still had the boat leaning his way. That’s when we figured out he was a big ol’ boy,” Powell said. “We almost had him in and realized we were taking on water because we were all trying to roll him over and had all our weight on that side. We knew we had to get him in here or we’re all about to be in this river.”

After finally securing the gator, Powell said the crew took a well-earned rest. They floated several miles down the river while catching their breath, and contemplating the night’s events.
Powell said he was mostly thankful Britton and the Steens had joined he and Frierson.

“If they weren’t going to come it would have been me and Eli hunting out of one boat,” Powell said. “I told him, ‘I don’t know what we would have done if me and you got hold of that thing. He might have drug us up and down that river all night long.’”

After unloading the gator and trucking it to Red Antler Processing in Yazoo City, they finally got the full specs on their catch.

Even with about six inches missing from its tail, the gator measured more than 13 feet and weighed in a tick under 800 pounds. Its belly measured 66 inches around, and its tail was 48 inches around.

Powell said he had been hoping to land a big gator, but never imagined getting one that big — especially on his first hunt.

“We were after one that we thought was about 11 feet, which I was excited about the first time ever hunting,” Powell said. “Getting 13-2, almost 800 pounds, I was over the moon.”

In the weeks since their hunt, Powell has been figuring out what to do with a third of a ton of alligator meat and dozens of square feet of hide.

He’s giving some of the meat away, he said, and getting the belly hide tanned. The skull, which measures nearly two feet long, will become a trophy.

“I’m getting every bit I can of it back, less the bones,” Powell said. “I’m about to have his head on my desk for life, too.”

He’ll also have the story of a lifetime, of his first alligator hunt that made him an international celebrity for a fleeting moment.

“It’s the kind of thing where you do something for the first time and it’ll probably never be the same once you do it,” he said. “I’m still going to put in next year because it’ll be a blast. There will never be a better first time experience than that.”

Powell said he’s now hooked on the adrenaline rush of gator hunting and plans to try for another permit — and a bigger gator — in 2022.

“Seeing it in real life like that, 20 yards away from you, you thought you had an adrenaline rush just holding the line. But you get eyes on him and that’s a whole other story there,” Powell said. “Deer hunting, you read a book for three hours and might get a 30-second adrenaline rush while you shoot the deer. Gator hunting, your adrenaline is rushing the whole time you’re fighting this, for two or three hours. It’s a pretty wild ride. Somebody asked me if I was scared, and I told them my adrenaline was pumping too much to be scared.”

Mississippi inmate who reportedly escaped while being escorted to…