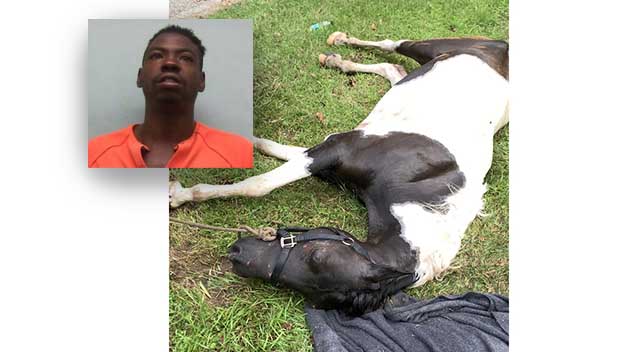 A Mississippi man charged with aggravated animal cruelty in the death of a horse in Adams County has also been charged with livestock theft.

Investigators believe Lavelle Ikard, 24, rode the horse from Madison to Roxie and then from Roxie to Adams County where an animal abuse incident was reported on Wednesday last week, she said.

Witnesses said they saw Ikard beating the horse in the face with a knotted rope as the animal lay in a ditch near Lee Road on U.S. 61.

The horse died late Saturday night. Ewing said she called the horse’s original owners and they were very distraught when they learned what had happened. “They are just sick about it,” she said.

After the incident, ACSO Deputy Frank Smith said Ikard told deputies the horse was given to him. He admitted to riding the horse six to seven hours that day starting from U.S. 84 at Highway 33 in Franklin County and stopping only once without giving the horse water, Smith said.

Deputies observed abrasions on the horse’s face and his eye was swollen shut, he said.

The horse also had a high fever and officers and veterinary professionals worked into the night to try and cool him down, Smith said.

In addition to facing an aggravated animal cruelty charge in Adams County, Ikard also faces a livestock theft charge in Franklin County, which carries a penalty of up to one year in prison or a fine of up to $1,000.

An aggravated animal cruelty charge carries a penalty between one and five years in prison and fines between $1,500 and $10,000, according to Mississippi law.

Ikard was being held in the Adams County Jail on a $50,000 bond as of Thursday.