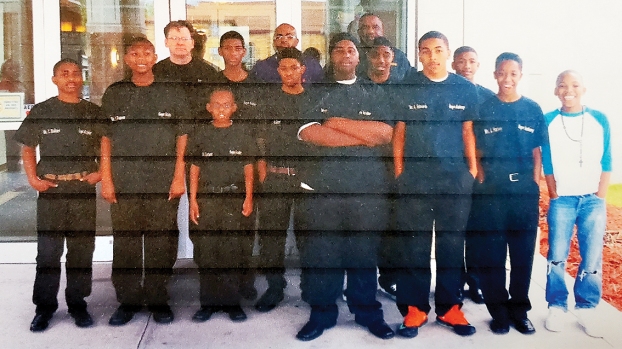 A new academy is coming to Brookhaven, bringing challenge and hope.

The Hope Academy is an instructional course with the goal of challenging young males to change their lives for the positive by giving them real alternatives for life.

Founder and director Commandant Kenneth Claiborne is a Mississippi native with 31 years of active duty experience in the U.S. Army and more than two decades with the Department of Defense. Claiborne founded the academy in 2013 after retiring, and began his first class in Biloxi in January 2014 with 25 cadets. Twenty-three graduated the program.

Claiborne drew from his own life experience to build a program that instills respect along with knowledge, and lets cadets know someone is there to stand in the gap for them — people who care about them and their futures.

“We build a community coalition with police chiefs, officers, courts, mothers, community leader, etc.,” Claiborne said. “It’s such a great thing to see, when the graduates see the community’s involvement in their lives.”

The Brookhaven program will begin January 2022 in the facilities of Abundant Life Church of Brookhaven on Hwy. 51 N. Pastor Ronnie Henderson Sr. offered the use of the church’s multiuse facility for the program and reached out to Mayor Joe Cox to gauge interest in the academy.

“Pastor Henderson got back with me immediately and said I needed to call Mayor Cox, that he was very interested in talking with me about the program,” Claiborne said.

The first endeavors of the program were not met with a lot of city official support, the commandant said.

“The first class was really suffering, really pushing and I never even met the mayor,” Claiborne said. “To see their passion here makes it so much easier.”

Claiborne said the mayor and City Clerk Samantha Melancon — as well as their office personnel — have met with him and shared their eagerness to get the program started and “have made this endeavor so easy.”

“I felt like its something we can do,” Cox said. “We can’t allocate funds but we can put the right people in the room to tell the story and others hear, and then tell the story of the mission.”

Numerous area leaders met with Claiborne this week to hear his proposal to use the academy to change the course of young people’s lives in Brookhaven — several aldermen, business leaders and educational leaders, as well as representatives from law enforcement and the courts. One person — businessman Johnny B. Smith — has already volunteered to go through the program and become an instructor of future classes.

“Systematically we have dropped the ball,” Claiborne said. “When the community leaders see the need, we can come in and turn it around or make failure a non-factor.”

The program will be on two schedules, where everything is tracked. There will be 36 modules of instruction and four major activities, including ceremonies, physical training, reviews, intense classroom instruction including leadership and financial stewardship modules.

“They will learn etiquette, but most of all respect and accountability,” said Bobby Govan, the academy’s dean of students and senior instructor.

Govan retired earlier this year after 38 years in the Army, and was heavily recruited by Claiborne to come on board as his instructional leader. He couldn’t say no, the native Mississippian said, and will soon relocate to Brookhaven.

“I was on the streets of Chicago at 14 years old,” Claiborne said. “I was used and abused. But so many people stood in the gap for me. The Hope Academy is not an abstract concept. I was one of these young men. I would be less of a human if I didn’t do it for them.”

The academy is not focused on one race or color of people, the instructors said, and will be available for young females, as well, when instructors are available. The program works where people get involved to encourage the students, Claiborne said, and will come alongside them to let them know the community is invested in them and their lives.

“There is a young man tonight with nowhere to go. If we won’t do something, what happens to him? He’s waiting on us now — what are we going to do?” Claiborne said. “That’s a bad feeling when you’ve got nowhere to go. I like to talk, but we have to do more — let’s execute, because they’re waiting on us. We can’t fail.”

Anyone who is interested in the program — to get a young person involved, to offer support, to make a donation or to ask questions — can call Claiborne at 601-569-3119. Also a pastor of Christ Temple Ministries in Gulfport, Claiborne said callers should leave a voicemail directed to The Hope Academy and he will follow up as quickly as possible.

“This is your class, Brookhaven. You need to claim it as ‘my class,’” Claiborne said.

“The hope of The Hope Academy is for young men to go back into their communities and it have a snowball effect — the change is in the person, and his friends see the change and want it,” Govan said. “Coolness has been redefined. There’s no anti-community foolishness. People begin to change how they act and they change wants cool.”

Claiborne said he and Govan are excited about the buy-in from the city’s elected and community leadership and are looking forward to the citizens seeing the change the academy will make in people’s lives.