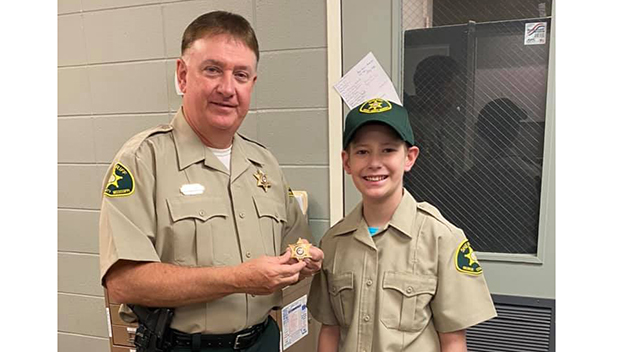 A Mississippi boy battling cancer who said he wanted to “protect and serve” the citizens of his community got his wish when he was sworn in as one of George County’s youngest sheriffs. — if only for a day.

Diagnosed in September 2016 with Acute Myeloid Leukemia, Brandon Murrah was made honorary sheriff for the day by the George County Board of Supervisors on Sept. 20.

“We’re proud to introduce Honorary Sheriff Brandon Murrah! Brandon is the son of Carrina Mixon Murrah and has a long history of law enforcement officers in his family,” a post on social media said on the George County Sheriff’s Office Facebook page.  “One of the items on his ‘Best Days’ list was to serve the citizens of George County as Sheriff.”

At the regular Board of Supervisors meeting Murrah was presented with a proclamation naming him honorary sheriff for the day, as well as proclaiming Sept. 20th, 2021, as Childhood Cancer Awareness Day in George County.

“If you see our Honorary Sheriff out and about, be sure to tell him hello and wish him luck on the job! And please continue to pray for all of our childhood warriors and their families, as they face their struggle with cancer,” the post said.