Missing Mississippi boy told his mom his dogs ‘laid on him like a burrito, kept him warm in woods’ 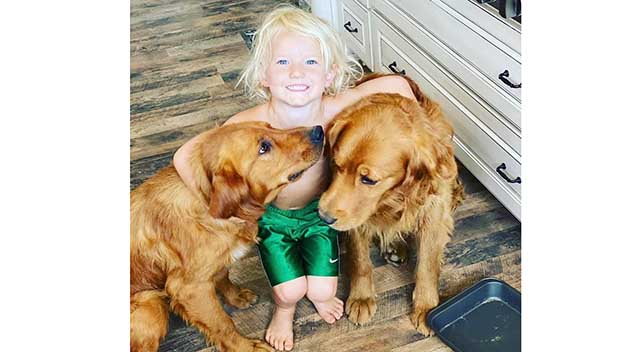 Days after a 5-year-old Mississippi boy wandered into the woods with his dogs panicking his parents and sparking a search for 14 hours before he was found safe, his mother says she has a plan in case he wanders off again — a GPS necklace and GPS collars for their dogs.

Melanie Millier Dean, the mother of young Henton Dean, issued a lengthy statement on social media last week after Henton was successfully located last Wednesday after the boy spent the night in the woods with his two dogs, while his community searched and worried.

Mrs. Dean said she needed to thank many people and three special dogs – two belonging to their family and one owned by a stranger.

“Our dogs, who in his words laid on him like a burrito and kept him warms,” Dean wrote. “‘I was never cold Mama, they are super warm.'”

Dean said she would be forever indebted to all of the volunteers and professional first responders who searched through the night trying to find Henton, but that she sought to give special thanks to two special people.

“Chris Rawson drove from Memphis with his search dog at 5 a.m. after being up on another call all night,” Dean wrote. “His dog smelled my son’s blanket and within 5-10 minutes he had found him and called me right away yelling, ‘I see your boy, I’m telling him to go out!!'”

“He yelled at him to get up out of the patch of woods he was in and that’s where he led himself out straight to Jessica Courvelle Calvert who listened to a calling that she was to sit at that exact spot and wait for my baby. And so she waited,” Dean wrote. “Without these 2 individuals and this dog, I don’t know what would have happened with that snake being there.

“(Rawson) couldn’t get to him because of a very aggressive snake that his dog got on near my son, he and his dog got Henton to get up into the clearing where they were able to see him and thank the Lord they were standing there waiting on him like they knew he’d emerge from that exact spot. I am forever grateful to everyone involved but especially these 2 people I would really like to hug their necks extra big. … You will be in my heart forever.”

Mrs. Dean said she wasn’t going to let critics get her down. She did nothing wrong and had only turned her back on her son for a moment when he disappeared and she has a plan for addressing it next time.

“Since as you all know this was Henton’s second time running off on an adventure out here, not quite to this scale obviously, but we purchased a GPS tracker that will be on a leather necklace. We have also purchased two live GPS tracking collars for the puppies. We were told by several experts once a kid is a “runner” he will most likely try his best to do it again. We already have a watch, but it can be removed.”

Mrs. Dean said Henton is just a different kind of child, one who truly just loves the outdoors and likes to run.

“When he was 18 months old he climbed a 6-foot tall privacy fence into our neighbor’s backyard. He would truly live outside. We have latches, cameras, alarms, and even a GPS watch,” she wrote. “He has zero fear, he is a country, wild at heart, explorer, who one day will be some type of extreme outdoorsman.”

“He has had a lot of close calls but I assure you, we as his parents, do nothing but try our best to keep him safe. I am OVERJOYED to have my baby back and you will NOT rain on my parade.
I love you ALL! Thank you for loving my Henton. If you see our puppies give them a treat,” she wrote.