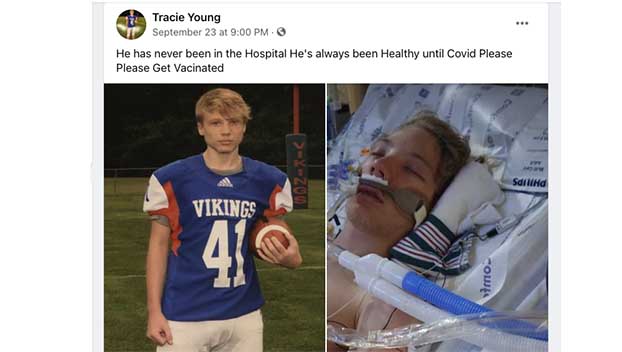 Two more Mississippi children have died in the last several days of the COVID-19 coronavirus, the mother of one child is urging people to get vaccinated.

One of the children played football at North Pontotoc High School. An obituary posted online for Landon Woodson said he died Saturday at Le Bonheur Children’s Hospital in Memphis. Landon’s mother Tracie Young posted on social media as the realization of his situation was sinking in.

“My Baby. My precious son. I’m so broken I can’t breathe without this child He is being taken off of (the) ventilator and everything. We are letting God have him now. I can’t say goodbye,” she wrote.

Later Young wrote that her son had been healthy until contracting COVID-19.

“He has never been in the hospital,” she wrote. “He’s always been healthy until Covid. Please, please get vaccinated.”

Woodson was a sophomore at North Pontotoc High School.

Woodson is the second of two additional pediatric deaths reported since late last week, Mississippi State Department of Health records indicate. Both the latest children to do were between 11 and 17 years old.

The latest deaths bring the total number of pediatric deaths due to COVID-19 to nine since the pandemic began. The state does not identify locations or other identifying information about such deaths. The second child has not been publicly identified through other means.

State health officials announced the death of a baby under age 1 earlier in September. September is now the deadliest month for children since the pandemic started with a total of three days this month.

Six of the nine total child deaths have occurred in the last three months.

New coronavirus cases still on decline across Mississippi, but…