After dumping $1M into riverfront park, community ready to walk away and quit fighting Mother Nature 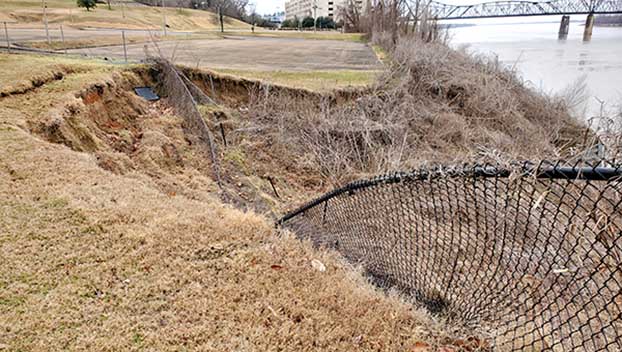 A collapsed portion of Riverfront Park is seen after a mudslide in February. (John Surratt/The Vicksburg Post)

The Vicksburg area’s most popular park could be closed permanently.

Mayor George Flaggs Jr. said Thursday the potential cost of repairs to slide areas in the Vicksburg Riverfront Park coupled with other possible work involving park facilities may be too much for the city and county to bear.

The city and county split the cost of repair and maintenance for the park, which has been closed since April 2020 because the slide areas have made it unsafe.

The estimate to fix the slide areas is $664,585, and the work has been approved for emergency grants from the Federal Emergency Management Agency and the Mississippi Emergency Management Agency that cover 75 percent of the eligible project costs. The FEMA grant is a reimbursement grant, meaning the city pays for the work and FEMA reimburses the cost.

However, Flaggs said other potential projects related to the slide repairs could make it too expensive to make the park safe enough to reopen to the public.

Robbins said the engineers discussed several options with city and county officials and he is in the process of determining the estimates for each.

“We want to see which way they prefer to go,” Robbins said. “Because anything outside the grant, the bill would have to be paid by the city and the county.”

Robbins did not outline the projects, but Flaggs said Thursday some of the extra work may involve moving the park’s restrooms and a pavilion and relocating the park’s road.

Since 2008, Flaggs said, the city and county have spent more than $ 1 million on Riverfront Park.

“We’ve spent $1.6 million already on trying to mitigate the river,” he said. “And the cost of mitigating and correcting this erosion problem on the river is going to cost more. It’s going to cost us to move the pavilion and the bathroom and street and we’re going to have to do something for the protection of erosion.

“I’m of the opinion that it’s cost-prohibitive to repair the recreational site,” he said. “You can’t keep dropping money in the hole. The river is unstable and it’s unremitting. It just makes sense to me to walk away from this baby, unplug the funding from the ventilator and let’s go.”

That means, Flaggs said, the city and county will have to examine other potential sites for another park.

“You shouldn’t pay money for something you can’t control,” he said. “We shouldn’t be spending money unnecessarily.”

The four slide areas — two on the riverbank and two on the Washington Street side of the park blocking parts of the park’s entrance road — occurred after heavy rains hit Warren County in January and April 2020.

The problems mark the second time the city had to close the park because of slides.

The city and county closed the park in 2018 and spent $324,348 to repair a slide area discovered in April 2015. The cost of the project later increased by $20,000 after oil was found on the property, which had been adjacent to a storage facility operated by Midsouth Oil that had nine above-ground storage tanks holding various petroleum products on property south of the park.

The city and county spent an additional $35,850 to remove old slabs and concrete retaining walls that were found during excavations related to the erosion repair.