Driver may have been in overturned vehicle for 8 hours below Mississippi interstate bridge, before being spotted and rescued 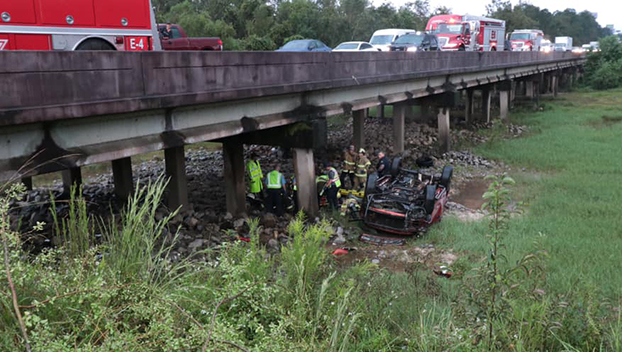 Officials believe a driver may have been stuck for eight hours in a vehicle that crashed and dropped 30-feet below an interstate bridge before the overturned vehicle was spotted and emergency responders could rescue the driver from the wreckage.

Officials from the Harrison County Fire Rescue posted a picture of the overturned vehicle on social media Thursday.

“The accident may have happened eight hours earlier, and was discovered when another accident on I-10 caused the traffic to back up and someone spotted the vehicle overturned under the bridge,” the post said.

The vehicle was found below the Wolf River bridge near the Long Beach exit WLOX in Biloxi reported.

Harrison County Fire Rescue, CRTC, AMR, Rescue 5 and Harrison County Sheriff’s Department responded and rescued the driver of the vehicle, who flown to a trauma center. No word on the driver’s condition.