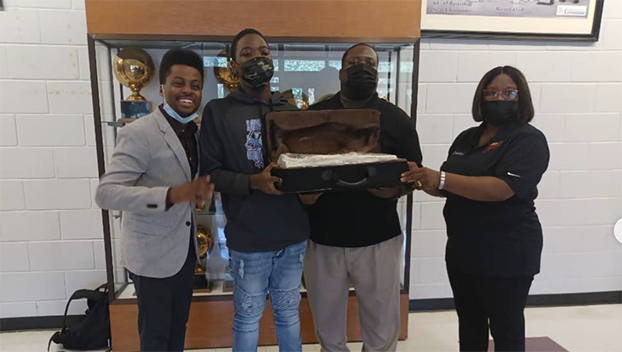 When Jackson native Antwone Perkins was young, he loved making music, even if he never got the chance to take lessons or play with new instruments.

Now 32, Perkins’ love of music and desire to see budding musicians excel and have pride in their work has inspired the musician to donate instruments to every high school in the Jackson Public Schools district.

“I’m just glad to give back because dreams never die,” he said.

Beginning in September, Perkins has donated to Jim Hill High School, which he graduated from in 2007, and Lanier High School. On Tuesday, he donated a new trombone to the Sound of Perfection Marching Band at Murrah High School.

Band director Bryan Jefferson Sr. said he feels happy to receive the gift because for many students, getting an instrument is often out of reach.

Perkins said he wants every instrument he donates to stay with the band because he feels it’s important toward building legacies and inspiration at the schools.

“Mississippi is the birthplace of America’s music. This is our heritage,” he said. “We’ve had Muddy Waters, B.B. King, Pinetap Perkins — all these musicians that started this culture for America. So we have to push musicianship here — not just blues, but music as a whole.”

Perkins, who is self-taught, said he didn’t have many options to play music when he was very young because his mother could never afford instruments or lessons. Having a new trumpet or clarinet to play instills a sense of pride, he said, and encourages those students to work harder.

“That’s what I want these kids to know — you gotta push yourself to become better,” Perkins said. “Band is another outlet to gain unity in the community. You get together and meet new people.”

Perkins said he hopes his donations will inspire others to donate old instruments in good repair to schools so more students will be able to take part in their school bands. Perkins said he is also starting a nonprofit organization that will focus on providing more opportunities for young musicians nationwide, including scholarships for those who continue on to college.

Perkins said he hopes the donations begin to foster more good will among residents throughout the city and develop more programs not just around music, but helps young people around Jackson find better paths to lead enriched lives.

High School Football Scores: How did your favorite teams…