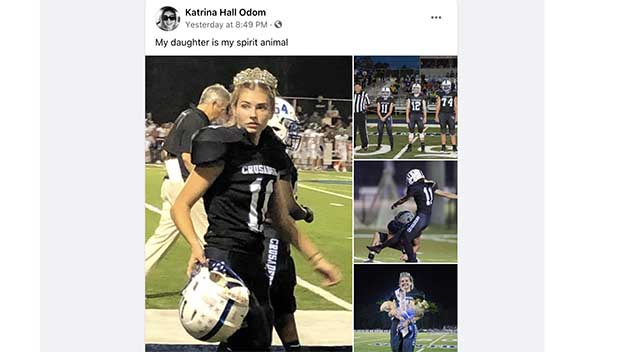 A Mississippi high school senior had a pretty special night Friday night as she kicked a field goal and was crowned homecoming queen at halftime, all on her birthday, too.

Jillian Hall, a senior at Sacred Heart Catholic School, has a pretty amazing night. We’d venture to say very few homecoming queens also put points on the board during the homecoming game too.

But that’s exactly what Hall did. As the team’s kicker, she was called onto the field just before halftime to kick a field goal, which she made.

Then, minutes later and still wearing her football uniform, Hall was crowned the school’s homecoming queen before a record crown at the school’s Klein Field, the school reported.

And the birthday? Well her fellow students were not going to let her forget about that.

That’s certainly a night she’ll remember for the rest of her life.

Her mother posted on social media, “My daughter is my spirit animal.”

Before the game, mom Katrina Hall Odom said Hall was ready for the game.

“No fancy dress for this Senior Homecoming Maid! She has a game to play,” she wrote.

An image shared on social media showed Hall walking off the file with her football helmet in one hand and her queen’s tiara sitting atop her head.

The image stirred the emotions of online commenters.

“This is the most beautiful and badass photo I’ve ever seen! I am so proud for her!” wrote one woman.

Another wrote: “This makes me want to cry happy tears!! Jillian is a great competitor and beautiful too!”