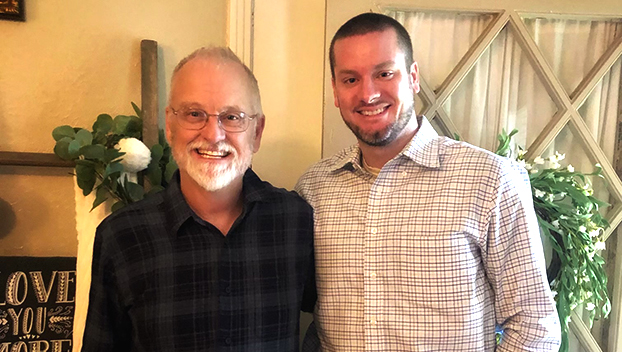 The Mississippi River may divide two states, but it will not keep two communities from helping a native son save his father’s life by donating one of his kidneys.

Todd Welch has Stage 5 kidney failure and only has one kidney.

His first kidney was removed when he was younger due to it not developing properly. After being diagnosed with kidney failure five years ago, his lone kidney has approximately 8 percent of functionality.

The Vidalia, Louisiana, resident has shocked doctors by continuing to work, not having to go on dialysis or be put in a wheelchair, but it was clear that in order to recover he would need a kidney transplant. He has been on a transplant list for the past two years.

“I get tired really easy and short of breath,” he said. However, has been able to continue his day-to-day job stocking for Frito Lay.

After much thought and prayer, Todd’s son, Mark Welch, offered a solution.

He learned that there is a higher chance for Todd’s body to accept the donated kidney if it comes from a living donor.

While the donor and recipient do not have to be related, Mark said there is a better chance that they would be a match if the recipient is the donor’s parent.

“It was going to get worse and worse,” he said. “My wife and I just tossed the idea around and, through a lot of prayer and guidance, arrived at a decision. We felt a few months ago as things were progressing that donating one of my kidneys was something we wanted to do.”

Mark said the process was a lot more complex than just raising your hand to volunteer.

First, he and his dad had to determine that they would be a match. As fate would have it, they were. Just before Hurricane Ida hit the coast of Louisiana in late August, they went through a tissue matching test.

“We were as close a match as we could be without being identical twins,” Mark said.

Last week, Mark went through a series of tests and consultations at Tulane Medical Center in New Orleans. These tests will be reviewed by a living donor board this week who will ultimately decide whether they can go through with the operation, which could take place in mid-November at Tulane.

The family has stayed lighthearted about the situation. Mark said he has an older sister and younger brother who he said teased about it.

“Dad’s birthday is Nov. 26 and I’ve said if the operation happens around Thanksgiving, then this will be his birthday present from me. My brother and sister can’t exactly throw in on it,” he said. “We’ve got a good sense of humor.”

Todd and Mark have been in contact with different people who have donated or received a kidney for reassurance that things would work out. Mark should be able to recover in five to seven days and return to his desk job at Delta Bank. For Todd, the recovery is expected to last a bit longer — six to eight weeks. Todd said his work supervisors have been supportive and told him his job would be waiting for him when he recovers.

“I am facing the biggest fear of my life. What would happen if my kidney failed?” Todd said, and then Mark offered to donate his. “It’s strange to think your child would do that for you and overwhelming to think that he would.”

Their faith and support from their churches and the Miss-Lou community has helped them through this process, they said. The best gift, Todd said, was when he was stopped by strangers while at work who said they heard about what he was facing and were praying for him.

“It’s humbling to think that many people care and are praying for you,” he said.

A “Poppin’ for Todd” fundraising event is scheduled to take place next Saturday, Oct. 9, from 8 a.m. until noon at Vidalia Delta Bank, 1617 Carter St. The fundraiser is sponsored by Kenny D’s Kettle Corn and various individuals who have donated items to a bake sale and silent auction so that all proceeds will go to the Welch family for the operation, travel and medications Todd will need after surgery.

Donations of baked goods and auction items can be dropped off or mailed to Delta Bank in Vidalia or at the Vidalia Police Department.

Those who would like to donate money to Todd and his wife Cristi’s PayPal can send funds to mmtwelch@yahoo.com.

“Dad has always been one who would give you the shirt of his back without expecting to receive anything, always following Godly lifestyle. It’s weird being on the other side of that with the community doing fundraisers for him,” John said. “I guess it goes to show how much what you’ve done is appreciated. And it is never surprising when the community comes together to help someone out. People always step up and say ‘what can I do?’”

Todd and Mark said the number one thing they need is prayer.