‘You rescue them for the people as much as the animal.’ Recreational climber rescues Mississippi cats from trees 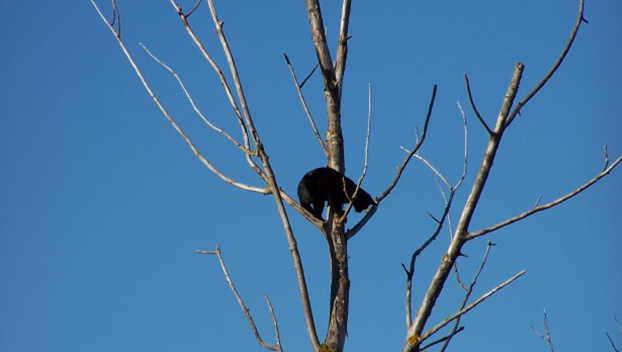 When retired Mississippi State University professor Bob Reese got a call in mid-September from a cat owner in Caledonia on a Friday afternoon, he was there within an hour.

Nelly, an 8-month-old black cat was perched roughly 50 feet up on a branch. She’d been there for at least a full 24 hours.
Reese, a recreational tree climber who runs the one-man operation Mississippi Cat Tree Rescue, sprang into action.

From start to finish, the rescue took about 45 minutes — from the time Reese geared up and began his ascent to when he rappelled back to the ground.

“In the bag,” Reese said triumphantly as he snagged Nelly from the branch and secured his trusty “cat bag” to his belt with her safely inside.

After reaching the ground, Nelly was released safely into a pet carrier.

It was another job well done for a man who’s made it his mission to ensure local cats hang on to all nine of their lives.

IT ALL STARTED WITH A CAT IN A TREE

Reese, 63, grew up in Eunice, Louisiana. He attended Louisiana Tech University, where he met his wife. They both landed jobs at Mississippi State University in 1989 and moved to Starkville, where Reese taught computer engineering for 30 years before retiring in 2019.

“Once we were married, we always had cats around the house and a dog, and over the years, occasionally one would get up a tree,” Reese said. “Fortunately, they were always low enough that I could use a ladder, but it was like ‘Man, one day I’m going to have to climb a tree with spikes or something to get them down.'”

In February 2013, it finally happened.

One of the Reeses’ cats climbed higher than a ladder could reach. Although he now considers 25 feet an easy climb, he needed help.

He called a couple of tree services in town that were unavailable, and a couple of cat rescuers he tracked down online were too far away.

“So that night, I was trying to come up with some scheme to nail boards to the tree and climb up it when (the cat) walked in the garage,” Reese said. “So she saved me from killing myself, but by that point I was like, ‘I’m going to do this.'”

He started watching YouTube videos on climbing, bought some gear and performed his first cat rescue in May 2013.

Reese did only a handful of rescues that year, but now, through word of mouth, he gets dozens of calls annually from people asking for his help rescuing their feline family members. By his records, he’s completed more than 300 rescues.

There’s a common misconception, Reese said, that cats don’t need help getting out of trees. While some cats may find their way down, others won’t.

“It is absolutely necessary to rescue cats in trees,” Reese said. “The first thing you’ll hear on Facebook is, ‘Don’t worry, they’ll come down on their own.’ That is a myth. I’ve rescued cats after three weeks in a tree.”

When Reese gets a call about a cat in need of help, he goes through a list of questions with the caller.

If the cat is a stray, where will it go after the rescue? If the tree isn’t on the cat owner’s property, do they have permission for him to climb the tree? Is the tree dead? Is there a suitable limb for setting a climbing rope?

Part of prepping for a rescue is having an address and photograph of the tree sent to him beforehand.

Then he evaluates the situation and finds a suitable limb for his climbing rope.

He shoots an establishing rope, attached to a bean bag, over a limb with a Big Shot launcher. It falls and he attaches a climbing rope to the end, pulling it back over the limb to set it. After tying it to the base of the tree, he begins to climb.

The most difficult part of any rescue, Reese said, is actually getting the rope in the right place without scaring the cat.

“That’s always the part I kind of dread,” Reese said. “Once I get past that part, and it’s successfully established, that was the hard part that’s over with.”

Once he’s reached the stuck feline, Reese breaks out the “cat bag” … a laundry bag from Walmart with a bottom corner cut out and replaced with netting. This homemade device allows Reese to turn the bag inside out, grab the cat by the scruff of the neck and then close the bag for the cat’s trip back to the ground.

He got the idea for his bag from another cat rescuer. The invention is necessary because grabbing the cat with his bare hand and attempting to stuff it into a bag often causes the cat to “start freaking out.”

GOING OUT ON A LIMB

Things get difficult when a frightened cat runs from Reese, climbing higher into the tree. On at least two occasions, he’s climbed up to 90 feet to rescue cats from pine trees.

And sometimes, cats will go out to the end of a limb, beyond his reach. Reese might be able to coax them to him with treats, which he keeps in a bag on his belt. But if the cat still won’t come close, Reese has an extendable animal control pole handy, which he only uses if there’s no other option.

“It’s been a lifesaver many times where it’s the only way to grab a skittish cat,” Reese said.

After grabbing them with the pole, he puts them in a net, releases the pole and takes them down safely.

From time to time, Reese climbs a tree just to have the cat he’s there to rescue jump out of the tree and run away.

“I’ve never had them get hurt,” Reese said, despite having witnessed cats fall from heights of 50 feet or more.

“They spread out like a flying squirrel, they hit the ground, take off, they’ll disappear for a few hours and they’ll show up like nothing ever happened,” Reese said.

“I think, pound for pound, cats are the toughest critters on the planet,” he added.

Reese’s most memorable, and arguably most difficult, rescue happened in December 2020.

A woman’s cat, Hip, was stuck inside of a hole that was 50 feet up a dead, limbless tree in the middle of wooded Monroe County.
The owners and Reese could just see the gray and white cat’s head, which was sticking out of a hole in the tree.

Because the tree was dead and rotting, Reese couldn’t climb it. Instead, he strung a rope between two live trees and attached a pulley with a rope hanging down beside the dead tree. After climbing up the rope, the cat was freed from the tree with a little extra help from Reese.

Although the cat wasn’t as high up the tree as some of Reese’s previous rescues, it was in an “extremely difficult position.”
“It was stuck,” Reese said. “I actually had to break the hole larger with my hand. I don’t even know how he got in there.”

Along with rescuing more than 300 cats, Reese has also retrieved a drone and rescued a coon dog that was stuck 30 feet up in a tree.

Over the years, he’s saved several cats twice and has even rescued one cat three times.
“It’s not like it’s a common situation, but it happens,” Reese said.

LETTING THE CAT OUT OF THE BAG

Reese is filled with a sense of relief and happiness when his feet touch the ground after a climb, and he hands the cat back to its owners.

If someone hands him cash after a rescue, Reese thanks them for their donation to the Oktibbeha County Humane Society. Reese has raised more than $10,000 since 2013 from his rescues and received a Volunteer Mississippi GIVE Award in 2020 for “Outstanding Achievement in Animal Advocacy.”

Though the problem-solving aspect of rescuing cats can be fun, helping people is the part Reese likes most.

“The drive back is always a wonderful drive because it’s been a good day,” Reese said. “Any day that you help somebody is a good day.”

Although Reese and his wife moved to Huntsville, Alabama, at the end of September to be closer to their children and grandchildren, he plans to continue rescuing the cats within a three-hour radius of Huntsville, which includes Tupelo and Starkville.

It’s work worth doing, he said, for the cats and their owners.

“You rescue them for the people as much as the animal,” Reese said. “People are suffering. They want their pet down safe.”