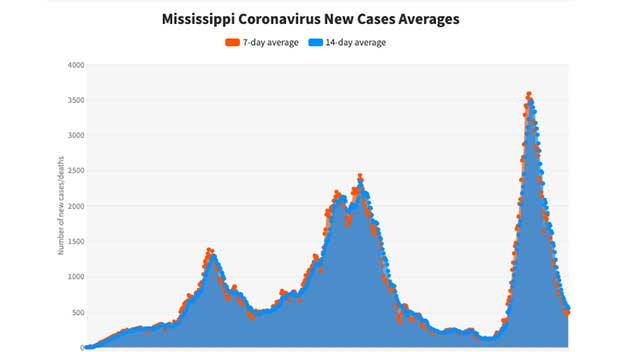 More than 588 days after the first case of the COVID-19 coronavirus was found in Mississippi in March 2020, the state topped a statistical milestone Wednesday marking more than 500,000 cases since the pandemic began.

Despite recording more than 500,000 total cases, the state’s current numbers have been improving. Although numbers jumped up slightly on Tuesday the overall trend of new cases continued down.

Statistics indicate that approximately 1 in every 299 Mississippians has died from the virus.

Through Wednesday, 46 percent of the total Mississippi population has been fully vaccinated. The number of fully vaccinated Mississippians has grown rapidly over the last several weeks but remains below the U.S. average of 57 percent.

The 7-day, daily average of new cases dropped to 491 on Wednesday.

The 14-day, daily average of new cases dropped to 552 with Wednesday’s update.

The numbers in this table are provisional. County case and deaths totals may change as investigation finds new or additional information.