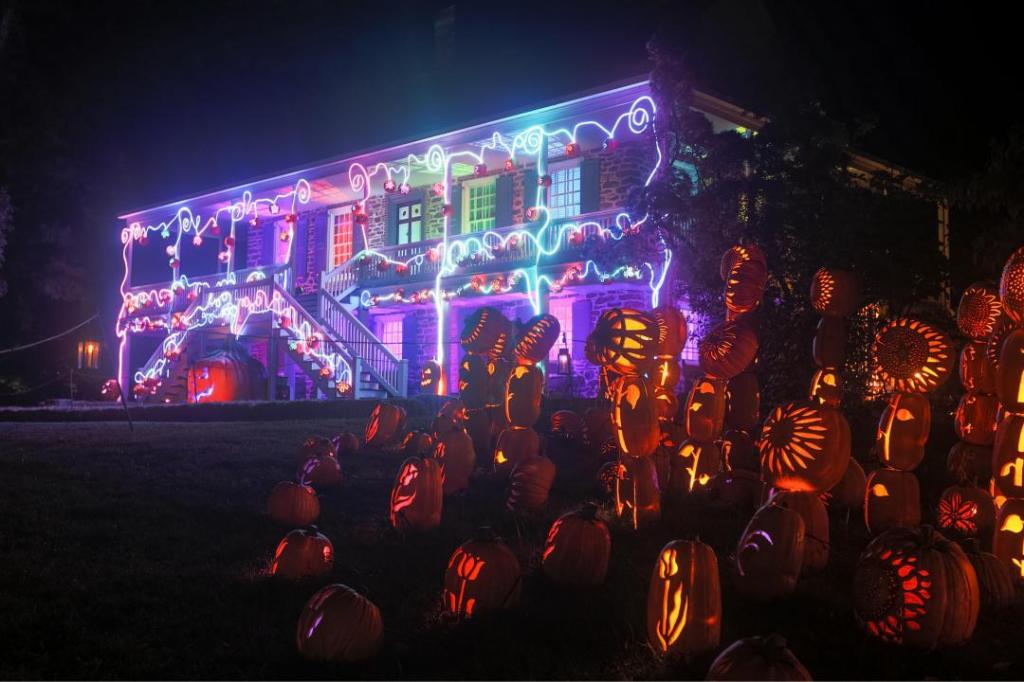 The celebration of harvest and the last days before winter dates back more than two millennia. Cultures around the world acknowledge this time in various ways: Some customs are based on religion while others are rooted in pagan lore. Over time, the marriage between these practices have led to what we see today: carved pumpkins, nighttime mischief, dressing in disguise, children begging for treats, and over-the-top Halloween decorations.

Stacker scoured the internet and accepted reader submissions to compile photos of 15 incredible Halloween decoration displays. These residents go through the time, trouble, and creative effort to convert their yards into jack-o’-lantern jungles, zombie zoos, or spook spectacles—and they do it for the joy of entertaining others.

Some of the Halloween displays unearthed are best viewed driving by at a slow crawl. Other display-builders provide a parking area so visitors can amble around, interacting with the inhabitants of the display (which may or may not be inanimate), and at least one display from this list involves walking through a maze. Most of these offer free admission, but in some cases, donations are gladly accepted, whether money is put toward charity or used to pay for the construction of next year’s event.

Read on for ghoulish Halloween displays from around the country.

You may also like: How Halloween has changed in the past 100 years 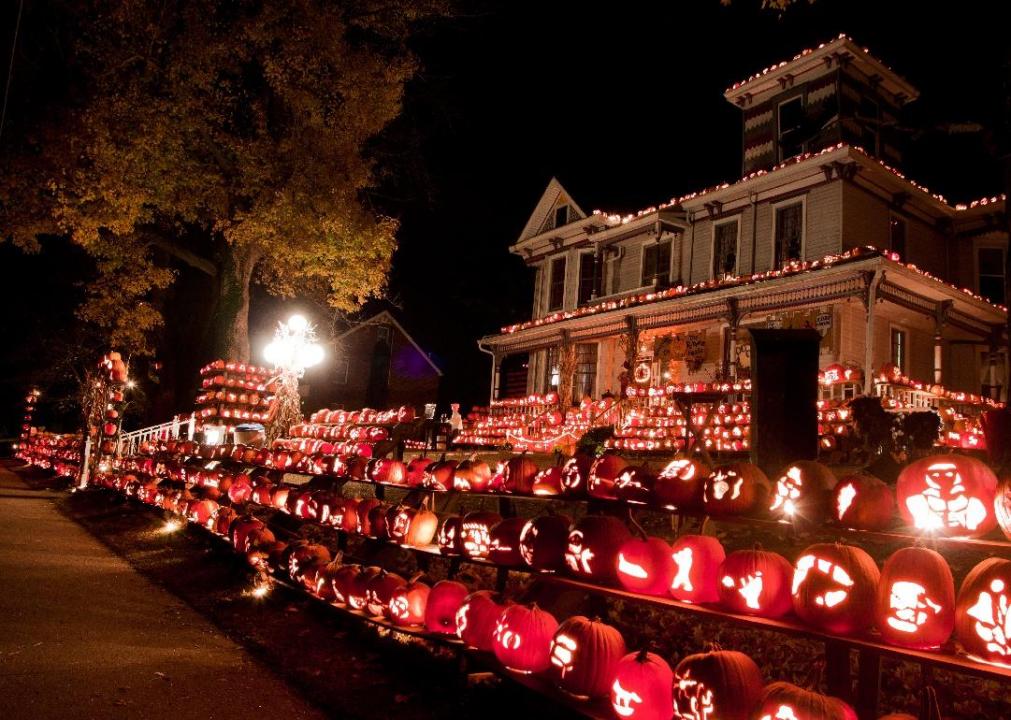 This Halloween spectacle is less about zombies and ghosts and more about the agricultural traditions of the area, both Kenova and nearby Ceredo. As part of the town’s C-K Autumn Fest, the display around this historic Victorian house at 748 Beech St. features scarecrows and contests, and 3,000 carved and illuminated pumpkins. 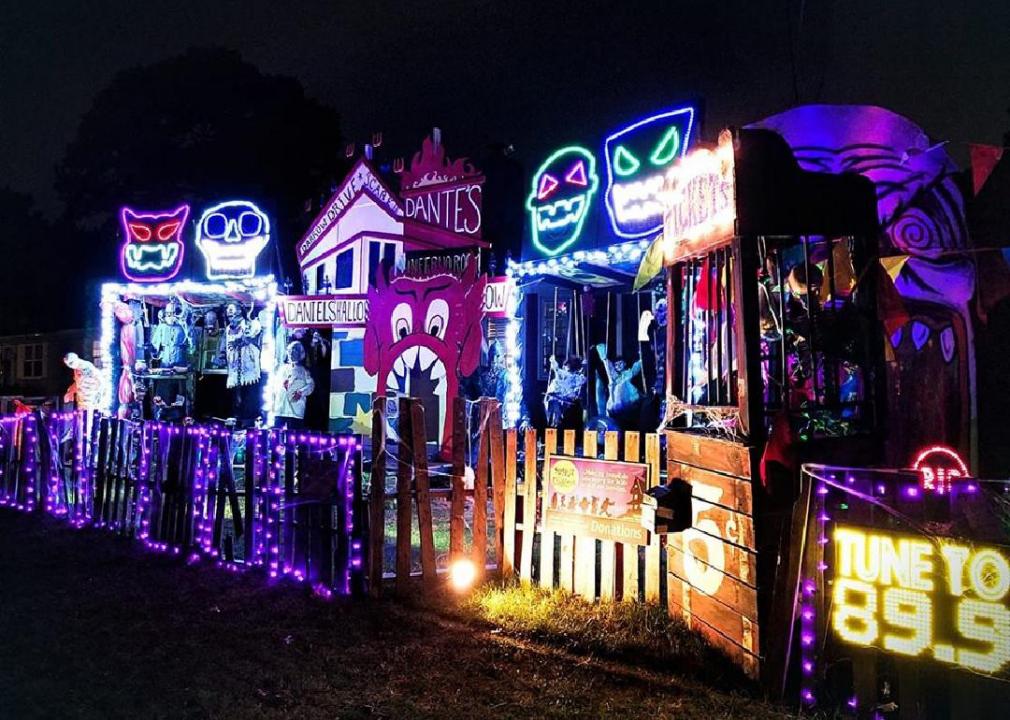 Mike Daniels has created what he calls the “epicenter of creepy Halloween displays.” Visitors can enjoy a light show synched to music and animatronics that creepily move (weather permitting). The full show, which serves as a fundraiser for the Spirit of Children foundation, runs Thursdays through Sundays at 69 Darrow Dr. 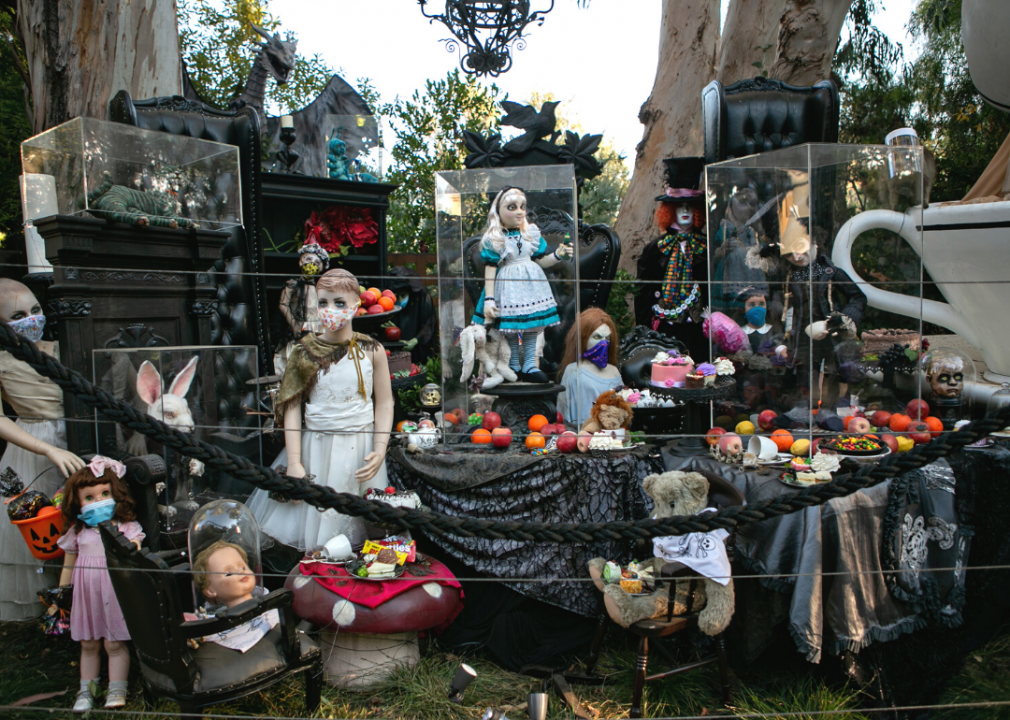 A home in Brentwood, California, created an elaborate and haunting “Alice in Wonderland”-themed display in 2020. This scene featured an array of both familiar and unfamiliar characters taking part in a creepy tea party. 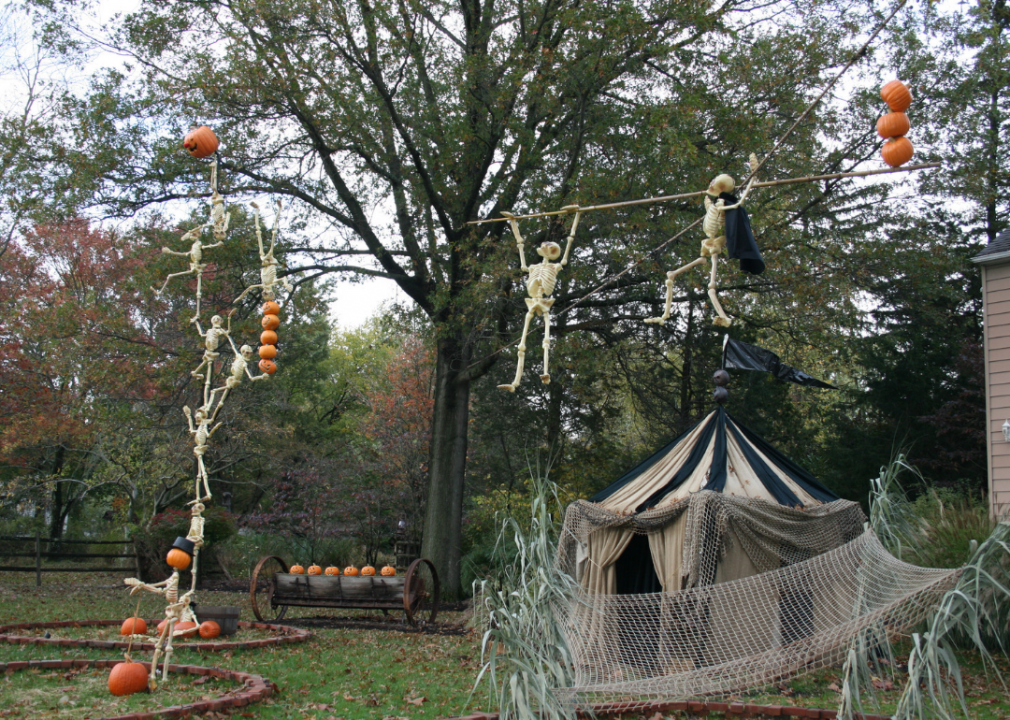 The tradition of the Adams family’s display at their 948 Route 202/206 home began with standard autumnal decor. One year, the owners incorporated skeletons—13 to be exact. They began with one skeleton, adding one each day and acting out a story, which led children who drove by daily on the school bus to believe the skeletons were alive.

This inspired the family to invent new stories for the skeletons to act out each year, a tradition that has spanned more than a decade. The family even published a childrens’ book based on the 13 skeletons in 2019 called “Circus of the Night.” For the entire month of October, visitors can view the storied display until 10 p.m., but there are also special times for attendees to see a show and explore the scene. Admission is free but donations are accepted. 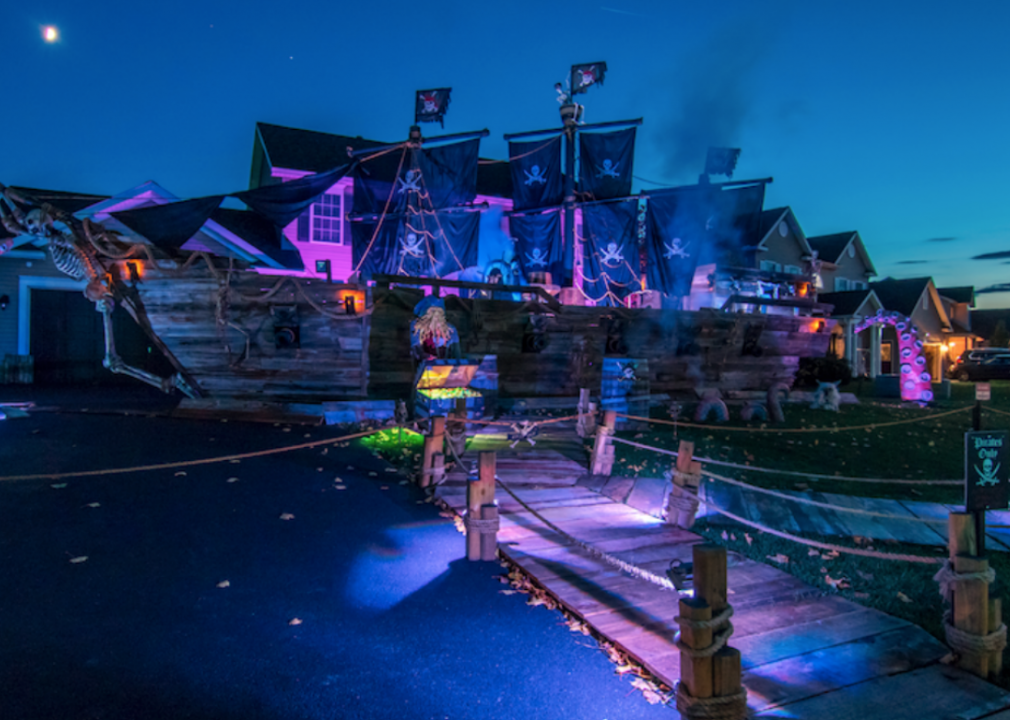 Tony DeMatteo of 15 Ambush Lane in Churchville, New York, creates an impressive family-friendly Halloween display for visitors to enjoy each year. The community can see the display for free, but the family asks for donations toward the Golisano Children’s Hospital Pediatric Intensive Care Unit and collect nonperishable food donations for the Open Door Mission of Rochester. The music and special effects elements of the show begin Oct. 22, weather permitting. 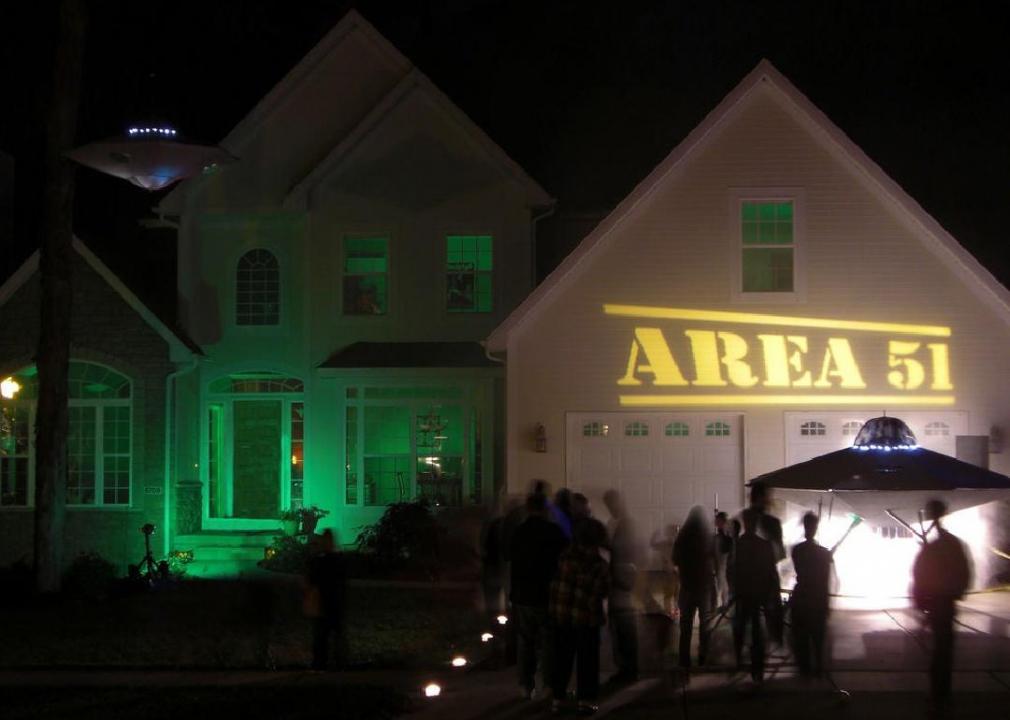 Invasion at Area 51 in Lansing, Michigan

Jerry Jodliski’s Area 51-themed Halloween display featured a 9-foot-tall and 13-foot-wide spaceship with three 6-inch tall aliens, as well as a second ship that hung 25 feet above the ground. Jodliski, who says his displays take all year to develop, runs an annual festival called How-To Halloween, honoring the do-it-yourself spirit that many people recall from childhood. 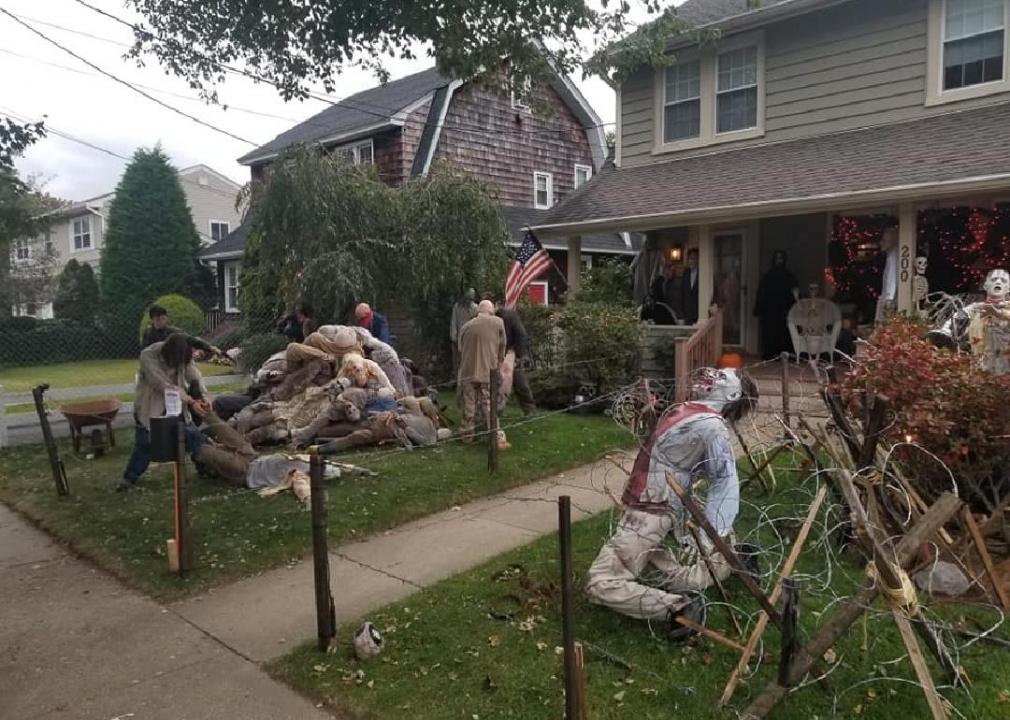 The occupants of the Halloween House at 200 N. Forest Ave. have been decorating the home each October for more than three decades, according to Mike Slade, who has lived in the home since he was a child. Slade says the decor has become scarier and more elaborate over the years. The display in 2018 featured a terrifying scene of zombies. 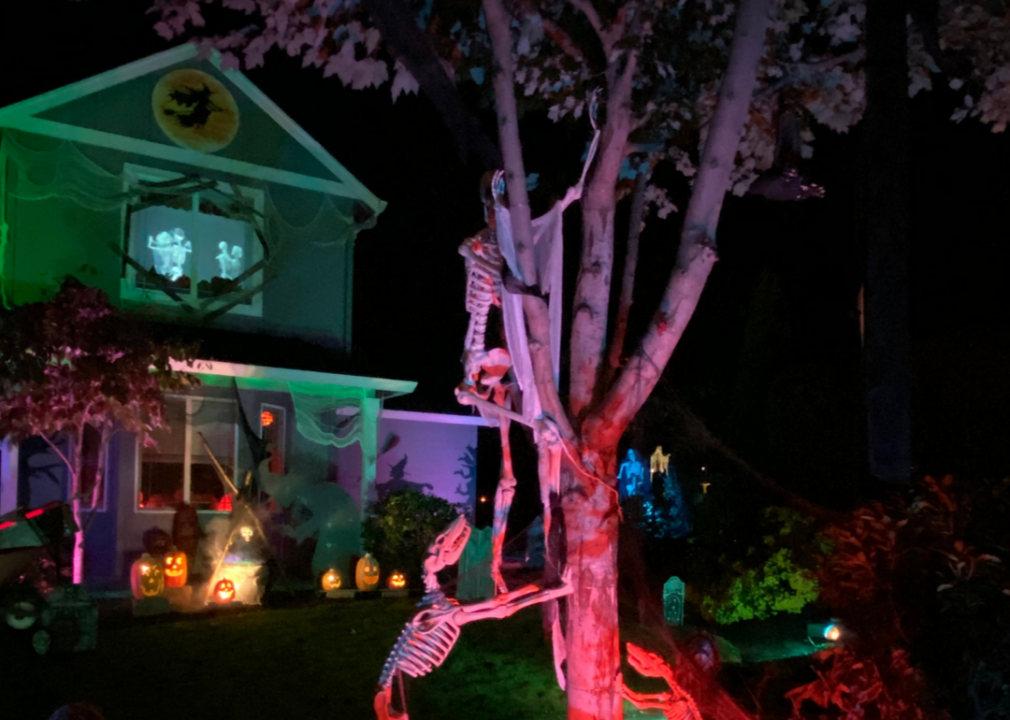 The Mains home in Vancouver, Washington

Stretching across four properties, the Mains’ 4616 Northwest Franklin St. home is famous for 12-foot pumpkin monsters and skeletons, a 15-foot scarecrow, and a 7-foot dragon, among countless other creepy creatures. In the week leading up to Halloween, from 7–9 p.m. on weekdays and 5–9 p.m. on weekends, visitors can swing by the display for spooky music and special effects. 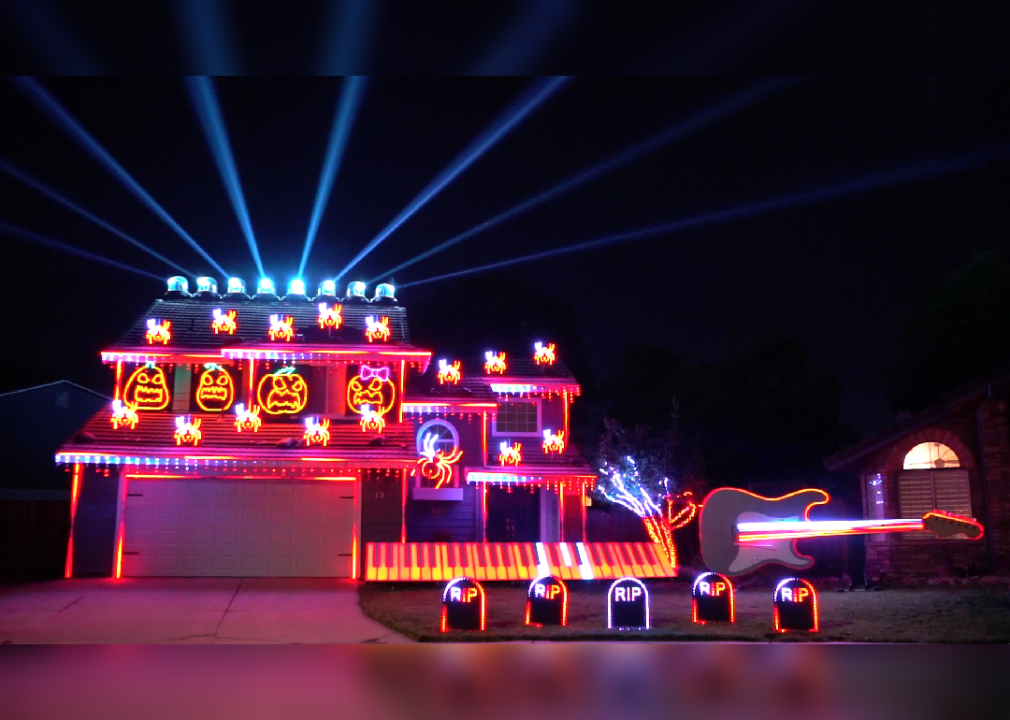 The Magical Light Shows at 15 Phillips Ct. is a free music-sequenced light show that has been featured on “Good Morning America.” The display features more than 70,000 lights and other special effects. Although the display takes place at a family home, it is part of a business that provides custom light show installations and other services. 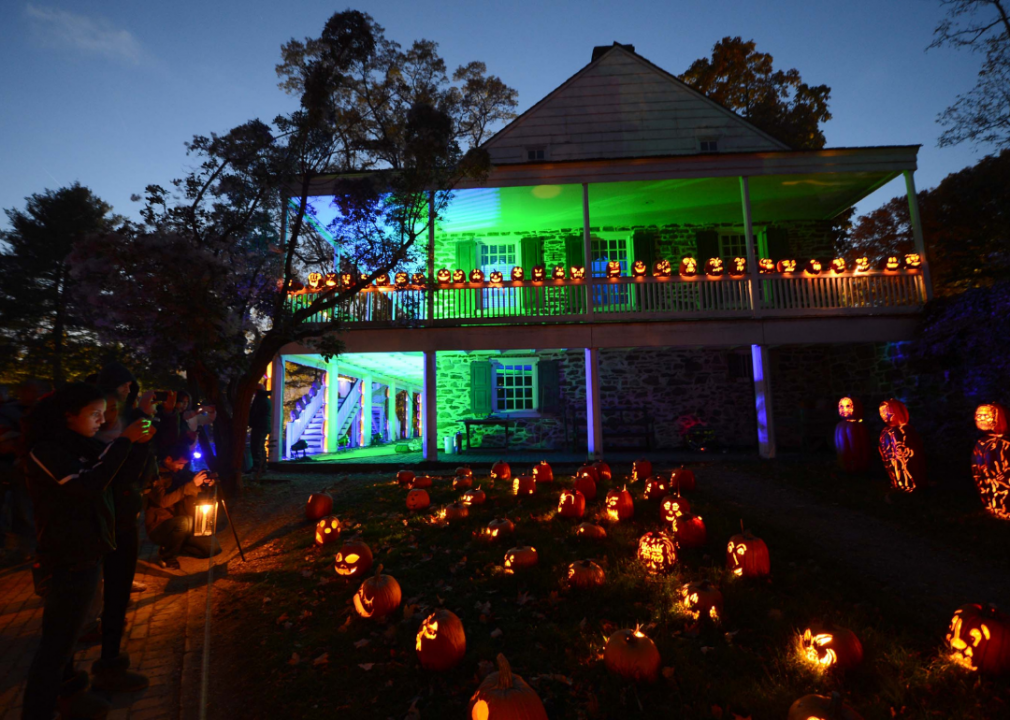 A farmhouse in Westchester County, New York, had more than 100,000 visitors in October 2013. The 25-day exhibit showcased about 5,000 decorated and lit jack-o’-lanterns. 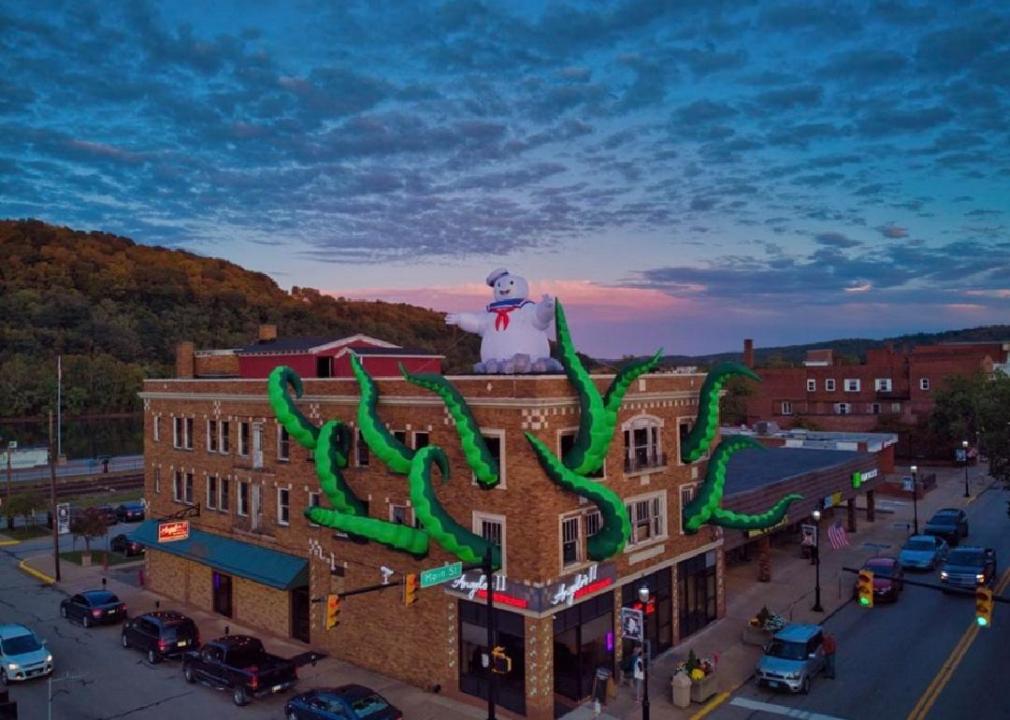 In 2019, Washington County restaurant Angelo’s II (111 Third St.) attracted national publicity with a larger-than-life “Ghostbusters”-themed display for Halloween. The restaurant’s owner Ryan Dzimiera said he and his uncle came up with idea around Easter of that year, and that the giant tentacles were custom designed for the building. 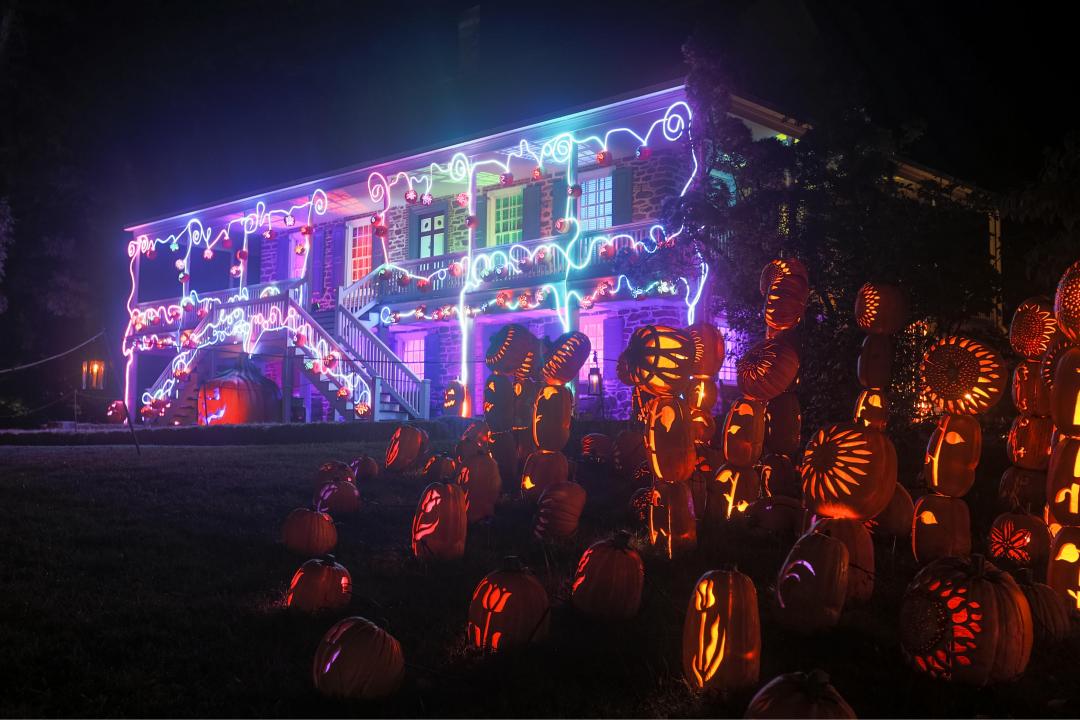 The Great Jack O’Lantern Blaze is a serious fall event held in the historic Hudson Valley, where pumpkin carving is done by bona fide artisans. Held in the Museum of Pumpkin Art at 525 S. Riverside Ave., the show features more than 7,000 illuminated jack-o’-lanterns. The show runs on select dates from September through November. There is an admission charge; tickets can be purchased in advance online. 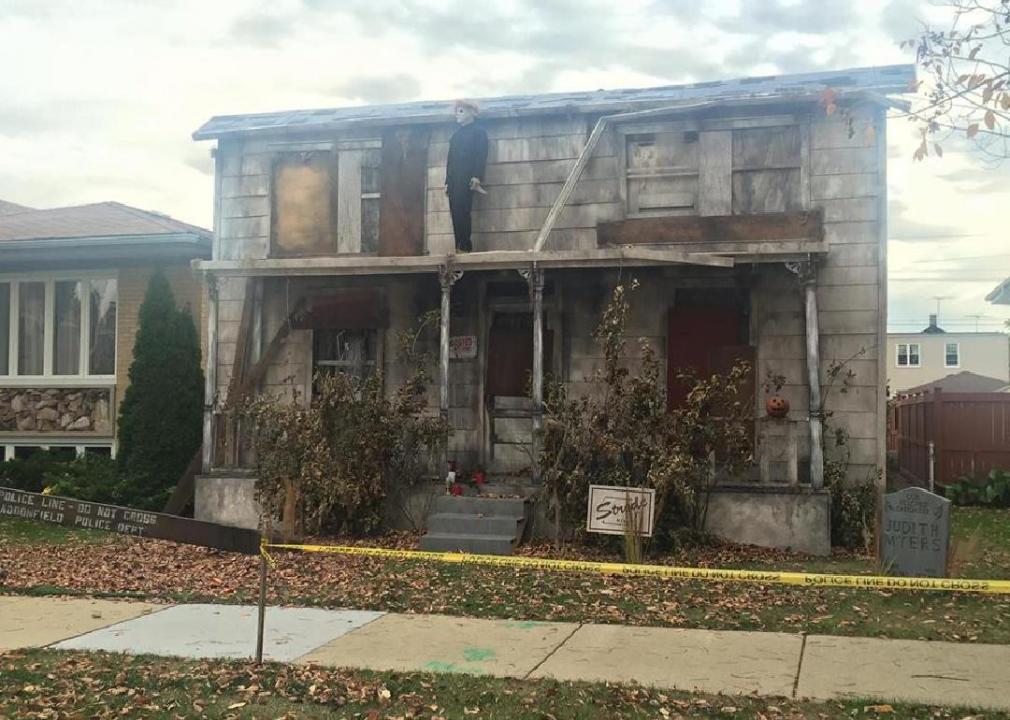 The house where all the slashing happened looks peaceful and a bit ordinary — on the exterior, at least—as it stands today in California. But viewers of the Halloween horror film series know the place a bit better as it looked in the John Carpenter films. Chicago resident Alex Sanchez built a facade resembling the film’s house and stood it in the yard in front of his own home on Moody Avenue near Montrose Avenue. 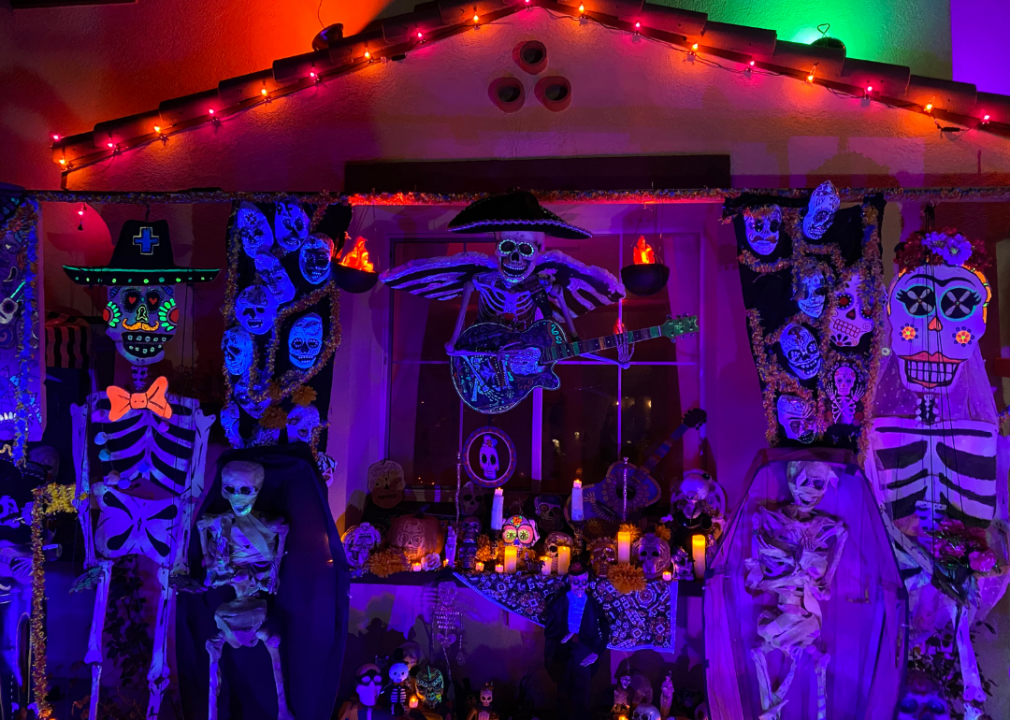 The display in front of Cameron and Rachael Denning’s Halloween House at 1050 Bells Dr. is filled with mostly handmade decorations. An entire garage at the Dennings’ home is completely devoted to Halloween decor. “Scary Circus” is 2021’s theme, with the couple’s daughters dressing up as acrobats and their son costumed as the strongman.