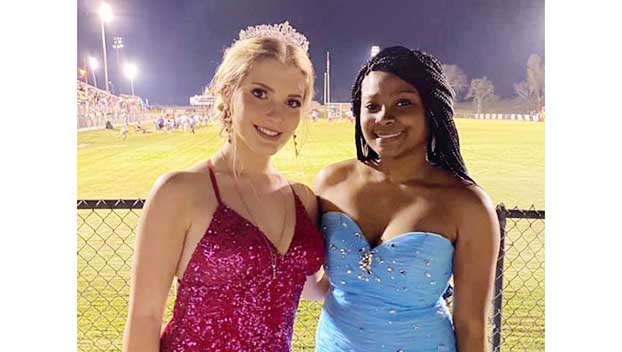 Forrest County Agricultural High School Homecoming Queen Nyla Covington, right, stunned the crowd Friday when she removed her tiara and gave it to classmate Brittany Walters, who lost her mother earlier in the day.

Leaders of a Mississippi county are honoring a high school homecoming queen who gave her crown to a friend whose mother had just died of cancer.

Forrest County Sheriff Charlie Sims presented Nyla Covington a citizenship award, and the county Board of Supervisors voted to pay her community college tuition. The supervisors declared this past Monday to be Nyla Covington Day, the Hattiesburg American reported.

“I think her act really gave people hope there are still good folks in the world,” Sims said.

Covington, 18, was crowned homecoming queen Sept. 24 at Forrest County Agricultural High School near Hattiesburg. During a ceremony on the football field, Covington immediately walked over to senior homecoming maid Brittany Walters and placed the crown on her head.

Walters’ mother, A.J. Walters, was an administrative assistant at the high school. She died the day of the school’s homecoming, but had made her daughter and husband promise that Brittany would take part in festivities that night. Covington received permission from school administrators to give the crown to her grieving friend.

Covington told WDAM-TV that Walters started to back away as she extended the crown to her.

Walters said she felt her mother’s presence through act of kindness.

“I can see my mom through Nyla,” Walters said. ” They have the same exact caring, giving spirit and it’s really fulfilling.”

Board of Supervisors President David Hogan said Monday that it was “awfully big” of Covington to give the crown to her friend. With Covington’s parents and grandparents watching, Hogan said: “We could all learn from you, Nyla.”

Where are the workers? Job aid has ended, yet…