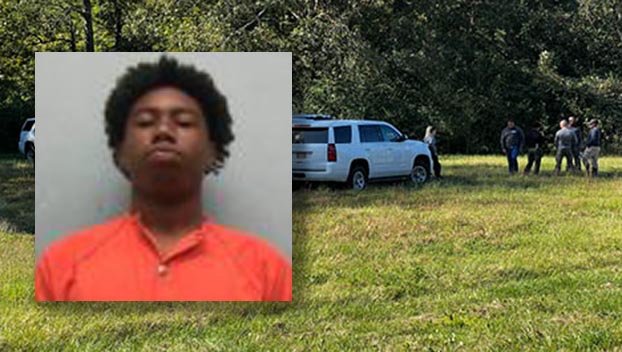 A 15-year-old has been arrested on murder charges one day after human remains were discovered in the Mississippi woods near the last known location of a teen missing since July.

Adams County Sheriff’s Office arrested a 15-year-old on first and second-degree murder charges Tuesday in a joint investigation with the Natchez Police Department.

The arrest was made within a day of ACSO and supporting agencies locating human remains in the woods near Booker and Morgantown roads on Tuesday morning.

Investigators tentatively identified the remains to be those of Bill Cavin Jr., a 19-year-old who has been reported missing since July.

“We are waiting for final word from the coroner before we say 100 percent that it is Bill Cavin Jr., but we were able to obtain dental records and evidence at the scene and felt confident enough to make this arrest,” Adams County Sheriff Travis Patten said. “After further investigation, we’ve identified Tayshon Holmes as a person of interest and picked him up yesterday to interview him and then made this arrest. We are working with Natchez Police Department investigators as well. This is a joint investigation.”

Holmes is being held at the Adams County Jail without bond.

Cavin’s last known location before his disappearance was near Morgantown Middle School at around noon on July 21.

Patten said the sheriff’s office obtained GPS information from Concordia Parish Sheriff’s Office regarding the missing teen and later located the human remains approximately 250 to 300 yards in the woods from the 100 block of Booker Road using cadaver dogs.

Natchez Police Chief Joseph Daughtry said K9 units had canvased the area on several different occasions previously and had not found anything.