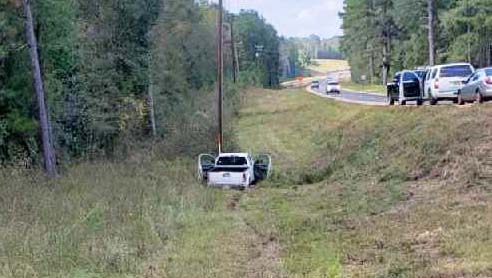 Two Mississippi men were arrested after they were found unconscious inside a truck with the engine running off the side of the road.

Jefferson Davis County deputy Michael Davis noticed a white truck off Hwy 42 in Prentiss near the entrance to Jeff Davis Lake. Once he approached the vehicle, he realized the engine was running and the vehicle was still in drive.  Two men were inside, both unconscious.

Davis found drugs and drug paraphernalia inside the vehicle. He was able to alert the driver, but had to administer Narcan to the passenger, who was laying across the center console. AAA arrived on scene but determined no further medical assistance was necessary.

The driver of the vehicle, Kevin Hearn, 42, of Monticello was charged with possession of drug paraphernalia, possession of a controlled substance, DUI other, driving while license suspended and no insurance.

Tom Case, 39, of Monticello, was the passenger in the vehicle and was charged with possession of drug paraphernalia and possession of a controlled substance.

This Mississippi mayor says he wants gun offenders in…