‘It was like a bomb coming through’ Officials suspect EF1 tornado ripped through town, flipped delivery truck on Mississippi interstate 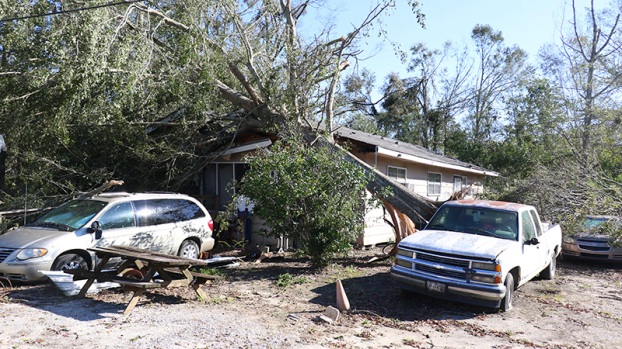 Officials say what is suspected to have been an EF 1 tornado damaged several homes, downed trees and power lines and even flipped over a delivery truck on the interstate.

Picayune Fire Chief Pat Weaver said the strong winds started at about 7 p.m. and appears to have started to cause damage in the area of Bales Avenue as it headed south toward the areas of South Blanks Avenue, Loftin Avenue and other streets. The tornado even turned over a Fed Ex truck that was traveling down Interstate 59 on the bridge over the East Hobolochitto Creek, Weaver said.

No injuries were reported, but several homes were damaged on North and South Howard Avenues and in other areas. One house on South Howard Avenue was damaged by a large tree that fell on it, while another house being remodeled a short distance away was blown off of the concrete block foundation.

A man who lives on that street, but also declined to be named, said that he stepped outside to assess the situation as the storm passed, and when he saw it was getting worse went to go back inside and close the door. However, the wind was so strong he almost couldn’t get the door closed.

“It was like a bomb coming through,” Beck said.

Weaver said that after the storm passed, crews with the fire department, public works and the police department worked together to clear the roads, most of which were cleared by 9 p.m. Wednesday. Only one road, East Canal Street, remained closed by Thursday morning because of downed power lines.

Pearl River County Emergency Management Director Danny Manley said that he and representatives with the National Weather Service are still assessing damage in and out of the city but at press time the storm appears to have generated an EF 1 tornado. The path of damage is still being assessed, Manley said.

Manley said no injuries were reported to his office.

You might be surprised how many crashes were caused…