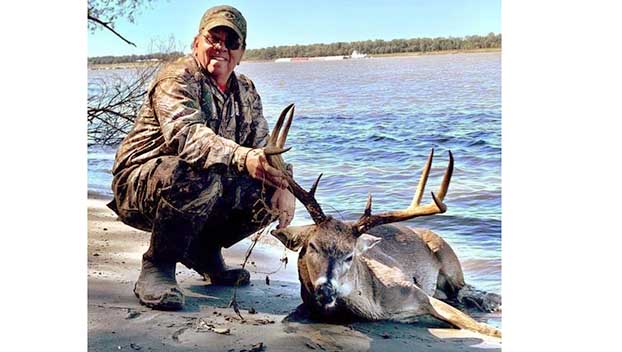 He hadn’t shot a trophy buck in more than a decade, but when a 150-class 8-point stepped out on Oct. 5, Ken McGarrh couldn’t resist.

As the deer ran away McGarrh felt good about his shot placement. However, what he didn’t know was a treacherous thunderstorm and the Mississippi River would conspire to take the buck away from him.

McGarrh, of Merigold, said he was hunting an area he’d not hunted this season, but weather conditions were good.

“I just went and hunted a spot because the wind was right to hunt that particular spot,” McGarrh said. “I was hunting some persimmon trees.”

If the name McGarrh combined with Merigold and persimmon trees sounds familiar, you may have read about his wife in the Clarion Ledger in 2020. Stephanie McGarrh was in a tree stand during archery season, but soon found she wasn’t alone. A 200-pound bear was above her and it raced down the tree growling within inches of her.

Although her husband was about to have problems of his own, he didn’t have that to contend with this day.

McGarrh climbed into his stand about 4 p.m. and in less than two hours the action started — and it came quickly.

“There was a 120-inch 8-point feeding under the persimmon tree and I heard something break,” McGarrh said.

The sound he heard was another 8-point walking, but it was much larger than the buck he’d been watching.

“I knew I was going to shoot as soon as I saw him,” McGarrh said. “I didn’t know how big he was, I just knew he was big enough.

“There was no hesitation because I haven’t shot a trophy buck since 2009. I’ve been very selective over the years.”

When the first opportunity came, McGarrh let his arrow fly. The buck ran away, but McGarrh was confident in his shot placement. He called his wife to share the news and she came to help track the deer.

That’s when the wheels began to fall off. McGarrh checked his phone and knew the weather would deteriorate soon and wash away the buck’s blood trail.

“I looked at the radar and there was a storm coming,” McGarrh said. “There was one big cloud and it was coming straight for us.”

McGarrh and his wife trailed the deer roughly 250 yards before the storm hit.

“We’d been on that trail about 45 minutes and the bottom fell out,” McGarrh said. “It was raining sideways and lightning was all around. We couldn’t have gotten more wet if we’d jumped in a lake.”

The two were still able to follow the blood trail, but McGarrh was uneasy about the situation. Normally he would have left so the deer had time to expire, then return to recover it the next morning.

“We only tracked that deer that far due to the rain,” McGarrh said. “My gut was telling me the whole time to back out.”

As they continued to trail the buck it jumped and ran.

A BEWILDERED TRACKING DOG AND A FEELING LIKE NO OTHER

The storm passed and McGarrh called tracking dog handler Chad Smith of Leland. Rather than wait to track the deer the following morning, the decision was made to get on the trail that night while it was still fresh.

The dog was able to pick up the deer’s scent, but the direction couldn’t have been worse. Watching the dog’s movements on a GPS, they saw he was on a straight track to the Mississippi River.

When they caught up with the dog he was sitting at the edge of the river and the search appeared to be over.

“We got there and there’s blood on the rocks and the dog was looking at us like, ‘What do I do now,’” McGarrh said. “Needless to say, my heart sank.”

McGarrh returned to the river the following morning. He thought there was a chance it had gotten caught on a rock dyke downstream, but when he arrived there was no deer.

Just to know he’d done all he could to recover the deer, a dejected McGarrh continued downstream. He walked along with no buck in sight, but when he passed a downed tree that had been blocking his view, there was his buck.

The buck with its 150-inch rack, 21½-inch spread and 24-inch main beams apparently swam to the river’s edge and died.

For McGarrh, finding it was a feeling like no other.

“I called up Stephanie and told her I’d found the deer and she thought I was joking,” McGarrh said. “If you could bottle up that feeling and sell it, I’d be a rich man.”