It isn’t easy being green: Alabama woman says she found frog in can of green beans 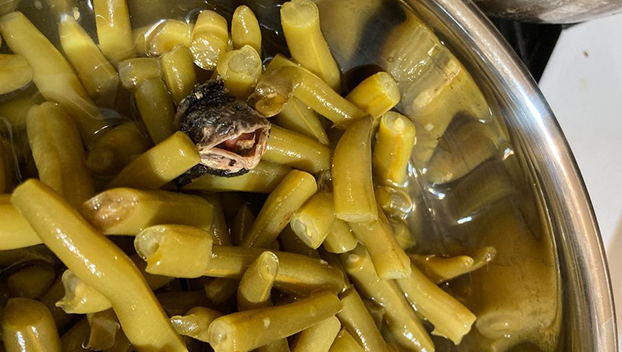 What an Alabama woman says she found in her a can of green beans will likely prevent her from eating green beans again.

Franklin said she has bought her cans of green beans 3 weeks ago and recently decided to cook them.

“I open the first can and everything was good, I opened a second can and to my dismay, surprise this is what I found in the can, the head of a frog,” Franklin posted along with pictures of green beans with a small green thing in the middle of the beans that resembles a small creature with eyes and a mouth.

Franklin asked her friends on social media who should she go to complain about the situation.

Several of the people that responded to her Facebook page said that Franklin should call the Food and Drug Administration, the Better Business Bureau and the headquarters of Walmart where she said she bought the cans of beans. Some suggested she call a lawyer.

“Keep the receipt and take pictures. Save the greens beans in a freezer bag or container, and keep the cans u opened. File a complaint with the (US Food and Drug Administration) food health department online. And then file a lawsuit if they are found liable after the food and health officials make a determination,” one person posted.

Some said the issue was no big deal.

“why is this news? If one does any gardening what so ever they know that all types of insects and creatures live in and eat vegetation. I cannot tell you how many little green frogs i have encountered while gardening along with other things that crawl. This one just got missed in the inspection process,” one person posted on the page.

Others said they had seen similar complaints about other green bean incidents before on the Internet. Some suggested that she

No response about which suggestions Franklin followed.