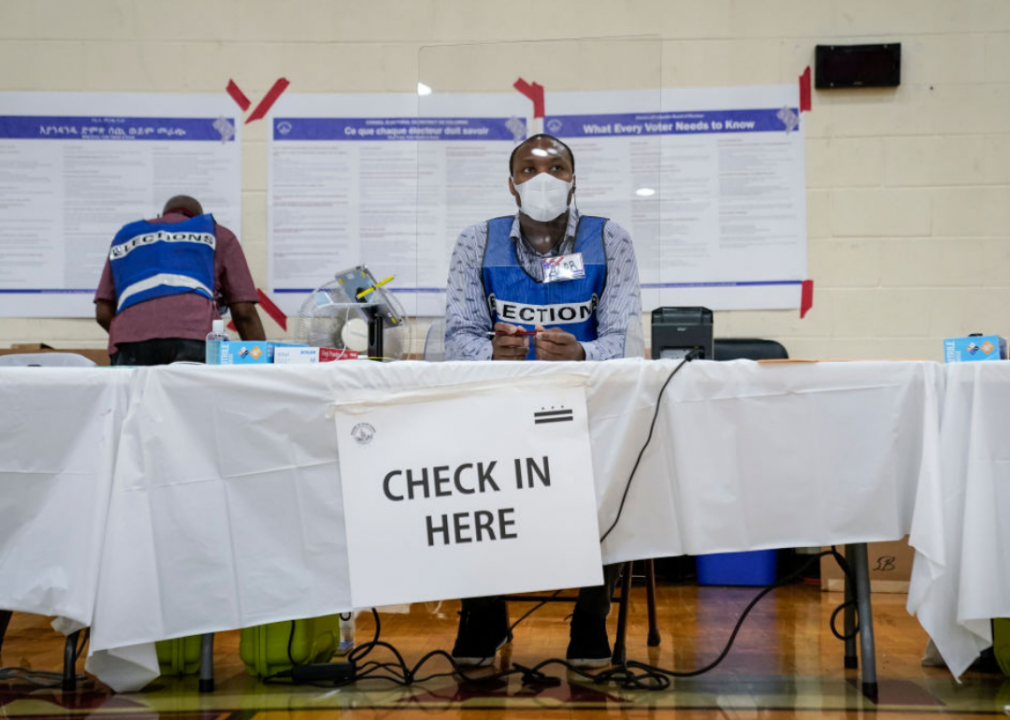 In 2020, 158.4 million citizens—almost two-thirds of estimated eligible voters—voted in the presidential elections, according to the Pew Research Center. The number represented a higher than average turnout, with people voting in numbers not seen since 1980 and possibly well before.

Stacker compiled voter demographics for each state and Washington, D.C., using the 2019 U.S. Census Bureau’s American Community Survey (released in September 2020). Each slide shows the state’s voting-eligible population (citizens who are 18 or older) and the breakdown of that population by sex, age, race, and education. Economic statistics are not included because the American Community Survey does not account for COVID-19, which affected unemployment, poverty, and medical insurance status for millions of Americans. In order to avoid making any assumptions about the data or the participants of the American Community Survey, Stacker used the exact wording of the “race” and “sex” framework that was provided in the census data.

Keep reading to see the voter demographics of your state.

Washington, D.C. by the numbers

The most diverse and educated voting population in the U.S., the District of Columbia sets itself apart from other regions. With three electoral votes, it’s the only voting region with equal ethnic voting percentages between its white and the Black or African American population. Washington, D.C., began to vote in 1961 after the non-state became enfranchised to vote for a president under the 23rd Amendment.

By percentage, voters aged 45–64 are the highest in every state, with registered voters over the age of 45 comprising more than half the country’s population. Older voters also trend toward turning out to vote at a higher rate and played a significant role in former President Donald Trump’s 2016 victory in Florida.

Along racial lines, Black or African American voters in Louisiana and Georgia comprise more than 30% of the state’s registered voters. California and Texas—which award the most electoral votes at 55 and 38, respectively—boast the highest numbers of Latino voters. On the other end of the spectrum, West Virginia and Maine boast the highest percentage of white voters. A number of states had already seen record voter turnouts, with 16 seeing more than half of its registered voters casting a ballot before Election Day.

Continue reading for a glimpse into the voter demographics of neighboring states.

Maryland residents are highly educated, with up to 38.8% holding either a bachelor’s, graduate, or professional degree. The Pew Research Center breaks down Maryland voting trends among populations including sex, race, and religious group based on party affiliation. Both Democrat and GOP voters in Maryland share almost equally the percentage of those with Catholic, Protestant, and Mainline Protestant beliefs.

Along with other East Coast states, Virginia has a high percentage of Black or African American voters. With up to 13 electoral votes, the Mother of States has had a less successful record of picking presidents compared to other states, only choosing the right candidate 66.7% of the time since 1900.