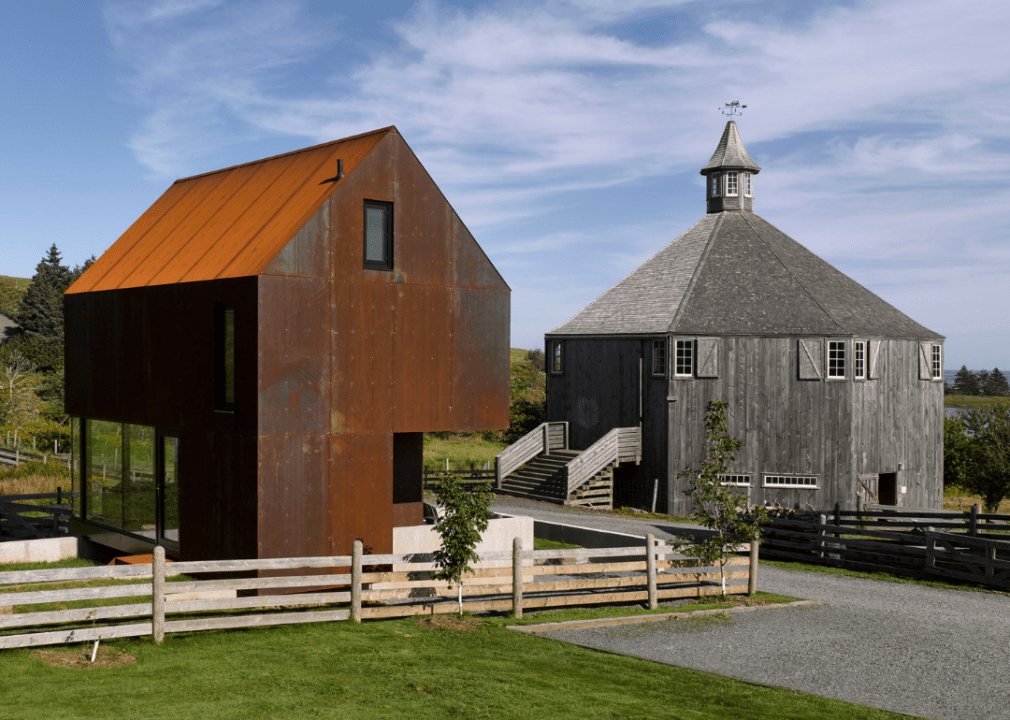 American builders have long relied on the same handful of materials to construct homes, from brick and masonry to concrete, steel, stone, and wood. In 2021, though, the industry faced historic shortages of these materials (namely lumber) amid a surge in home sales, new construction, DIY projects, and pauses on production—all linked to the COVID-19 pandemic.

In August 2021, the National Association of Home Builders reported that, since April 2020, the average price of a new single-family home had surged by $36,000. All of these challenges are doubled with increasing concerns over the need for sustainable construction practices: The World Green Building Council estimates 39% of energy-related carbon dioxide emissions can be linked to buildings and construction.

It may be the best time yet to consider alternative materials for building your next home. UpNest compiled a collection of 10 images showcasing gorgeous homes built with alternative materials, such as straw bales, glass, and shipping containers. Some of the homes featured here go back to the basics, using materials that humans living during the Paleolithic age—2.5 million years ago—used to build shelter, while others make use of futuristic building technologies that, even a few decades ago, seemed light-years away. 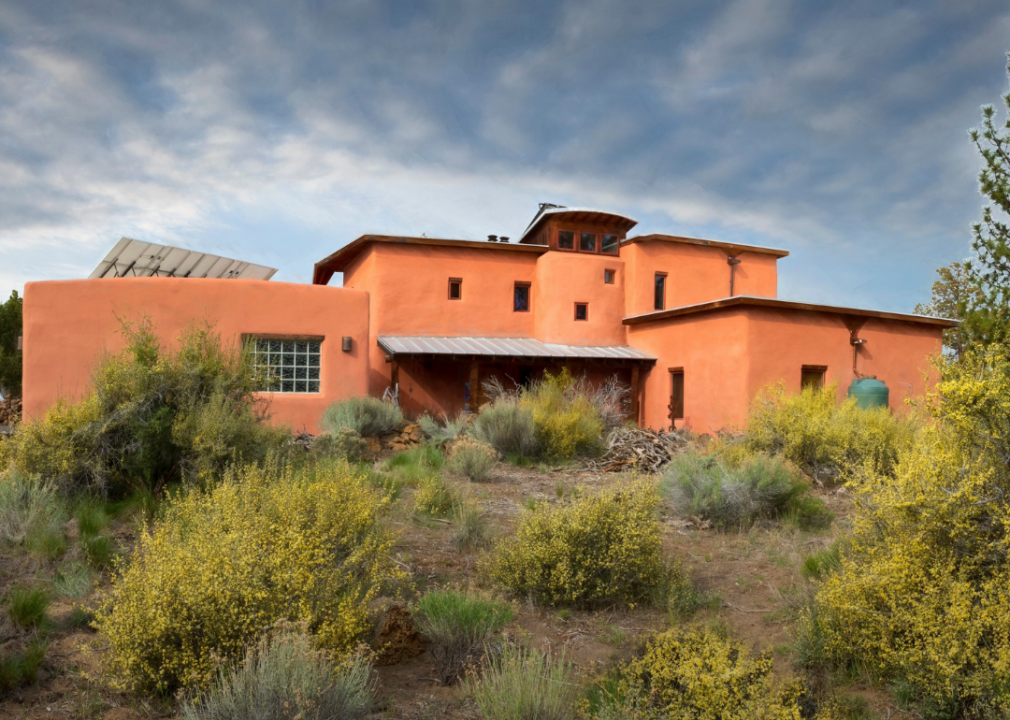 Straw has been used for ages to build shelter, but today’s structures often lean on other materials, such as timber, steel, or stone. Some modern builders with sustainability and cost in mind have looked to straw bales as an economical and eco-friendly material. Rancho las Hierbas (pictured) is a load-bearing straw-bale home built in Juniper Acres in Crook County, Oregon, near Bend. While the house was still being constructed in 2005, co-owner Alan Yankus estimated the plan for a 3,100-square-foot space made with ryegrass would ultimately cost $250,000. He noted its affordability compared to similarly sized homes in the area built with brick or wood, which cost around $600,000 at that time.

This alternative building material can also prove efficient when it comes to energy cost, as straw bales can be excellent insulators—better, even, than homes built with wood posts and beams, according to Andrew Kuperstein, the general contractor on Yankus’ Central Oregon house. In a 2007 article, Yankus reported only having to heat his home every other day for a few hours to keep it between 68 and 70 degrees Fahrenheit, thanks to the stucco-covered straw bales with which his home was built. 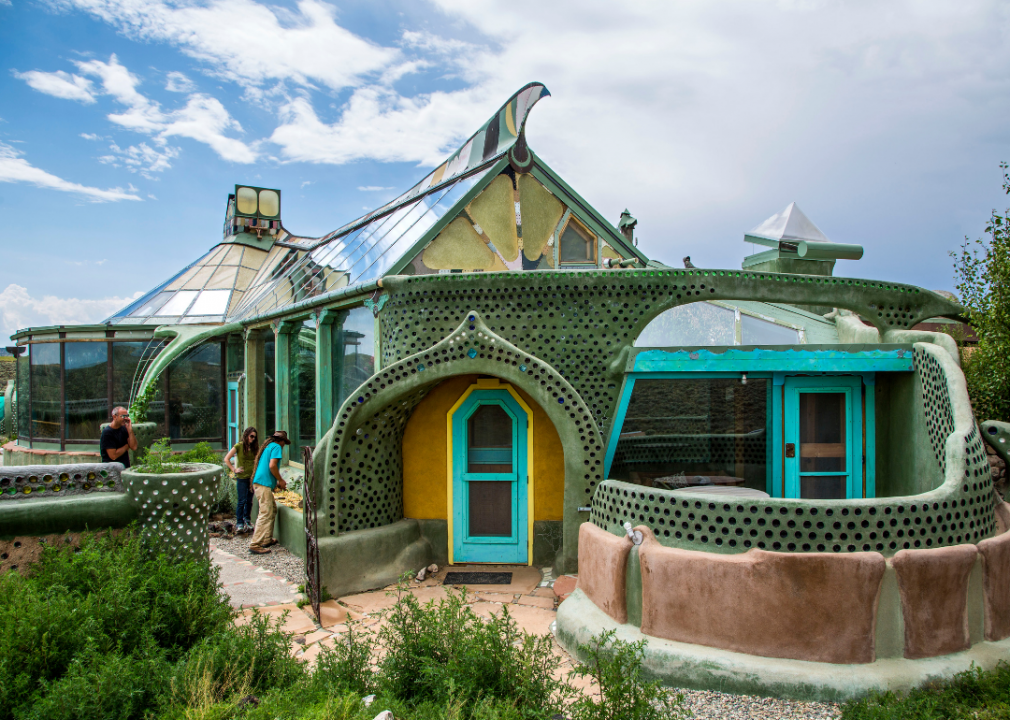 The Phoenix Earthship (pictured) serves as a visitor center and show home of sorts on the grounds of the Greater World Community in Tres Piedras, Taos, New Mexico. But Earthship Biotecture sells construction plans of their models and can also be hired to construct these buildings for customers.

The company’s Earthships are built with recycled and natural materials that are easily accessible and affordable. They utilize solar and wind energy to supply inhabitants with electricity, and use thermal mass and passive solar heating (in which soil is packed inside and around tires). A water cistern (a container for liquids) collects and recirculates water from rain and snow while a greenhouse attached to the Earthship helps produce crops throughout the year. 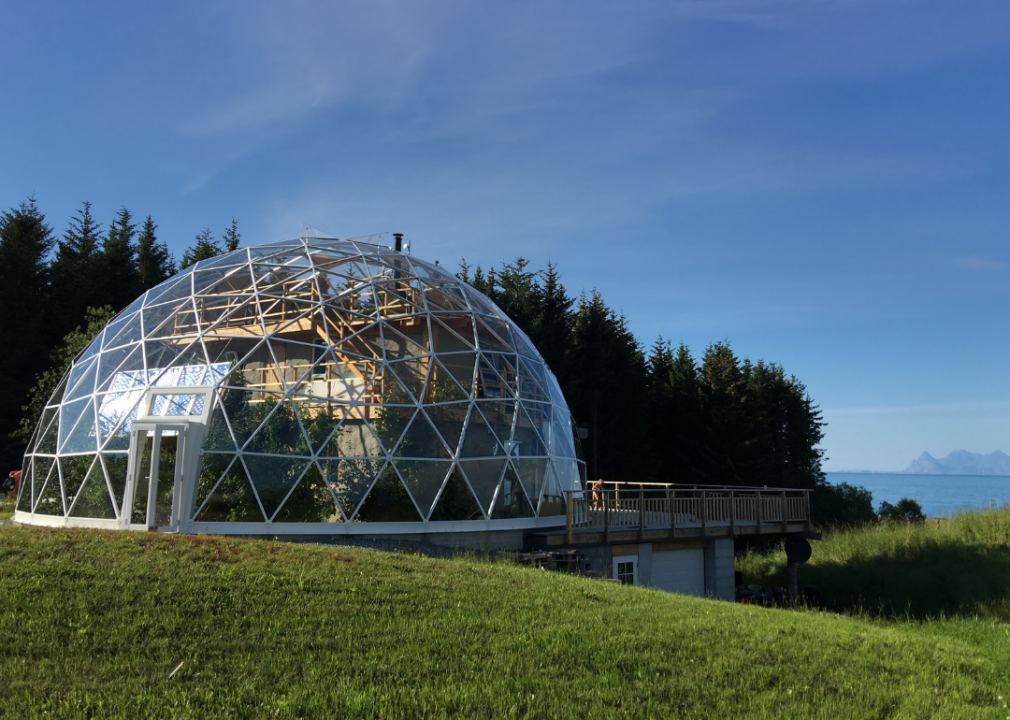 In 2016, Ingrid and Benjamin Hjertefølger of Norway added a 24-foot high geodesic dome made of single-glazed glass panels and recycled aluminum to their three-story cob Nature House (pictured) on Sandhorney Island. The house was constructed using straw, clay, sand, and other natural materials and is powered by solar panels. The dome acts as a greenhouse, allowing the Hjertefølger family to harvest their own fruits and vegetables for several months of the year at their off-the-grid home located in the Arctic Circle, where the average temperature in summer is just above freezing. Along with shielding the home from extreme weather, the dome also helps protect the family from ultraviolet radiation.

Ingrid and Benjamin reportedly spent £340,000 (equal to nearly half a million U.S. dollars in 2016) creating their other-worldly habitat. A 2016 documentary short called “The Heart Followers” featured the Hjertefølgers’ unique lives and dream home. 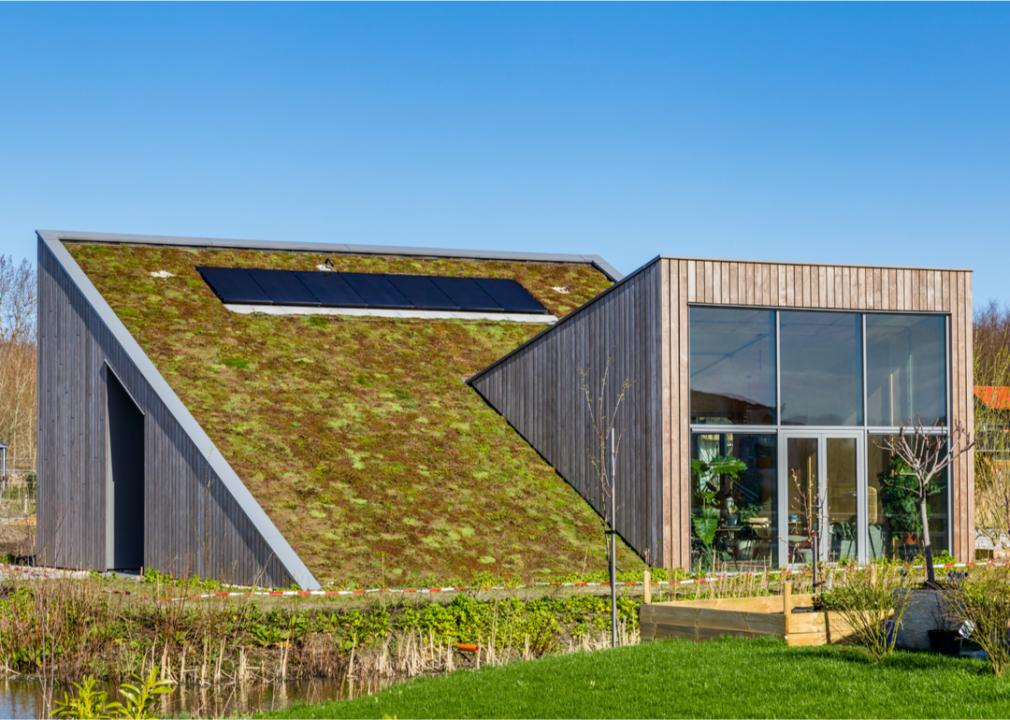 A green roof with vegetation can help moderate heat levels, decrease energy costs and reduce stormwater runoff—a major contributor to pollution and flooding in urban areas. This tiny home with a plant-covered roof is located in a 10,625-acre experimental community started in 2011 called Almere Oosterwold in the Netherlands.

The project sets limits in order to maintain the area’s rural characteristics: The area is roughly 2% water, 8% roads, 13% public green, 18% construction, and 59% urban agriculture. The people who live and work in the community have the flexibility and freedom to design their space exactly how they want—whether it’s a tent or an eco-friendly tiny house—though it does need to meet certain codes. 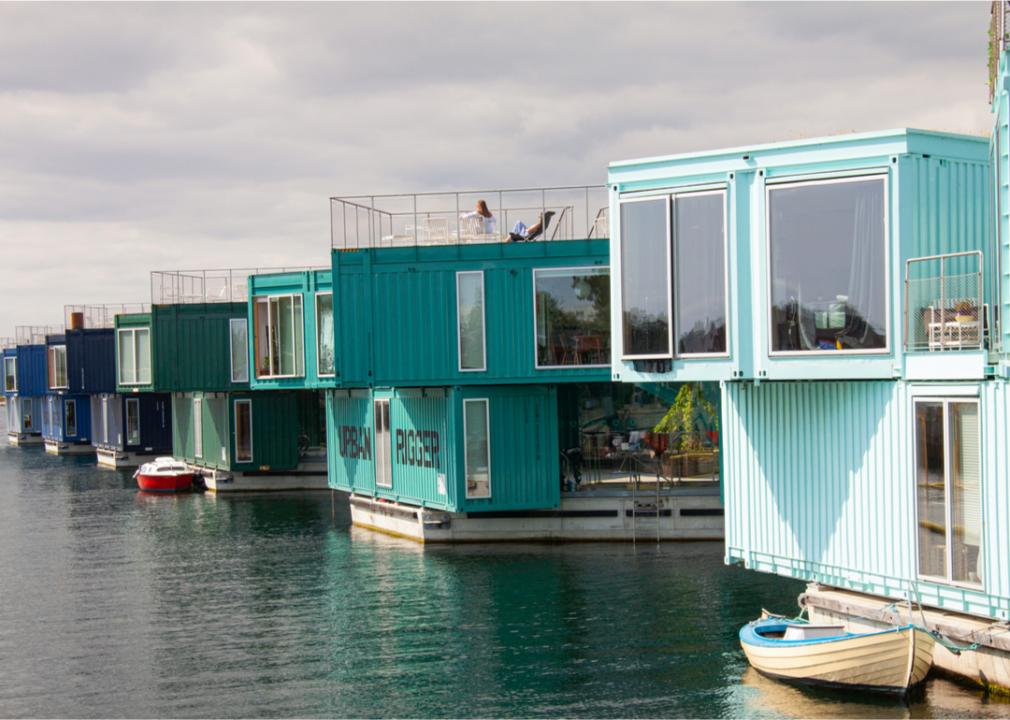 Urban Rigger is a sustainable housing concept designed by Danish architect Bjarke Ingels. The mobile floating community constructed of upcycled shipping containers (pictured here) is located in Copenhagen, Denmark, and serves as student housing, but the group says the concept can be replicated in other locations with access to a body of water.

The development of Urban Rigger was inspired by the need to tackle 21st-century housing challenges, with sustainability being a key aim. For example, the structure works with the biodiversity of its aquatic surroundings—vital components of a thriving ecosystem, such as mussels, barnacles, and algae, are able to grow and live on the structure’s surfaces. The floating community also utilizes solar panels and leans on seawater and low-energy pumps as a natural heat source. The concrete used in construction is watertight, with Urban Rigger claiming it won’t need maintenance for the next century. 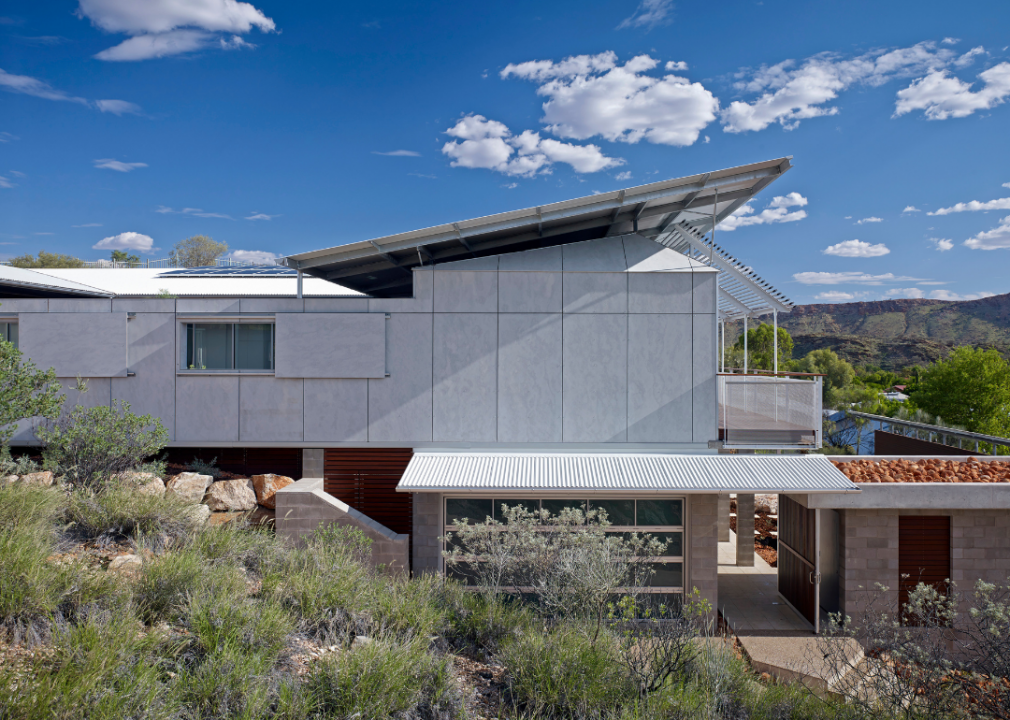 Desert House is located in Alice Springs, Australia, where temperatures range from 21 to 113 degrees Fahrenheit depending on the season. The two-story house is built into its rocky ground to help moderate the temperature fluctuations.

Its roof is positioned at an angle and hangs over the home like an umbrella in order to shield the insulated parts of the building from the roasting sun in the hot months. The heavily insulated and airtight home is powered by photovoltaic panels, and its heat and hot water are provided by evacuated solar tubes. The building’s exterior is covered in sheets of compressed fiber cement, which Dunn & Hillam Architects, who worked on the project, says doesn’t require maintenance and is strong enough to withstand the sun. 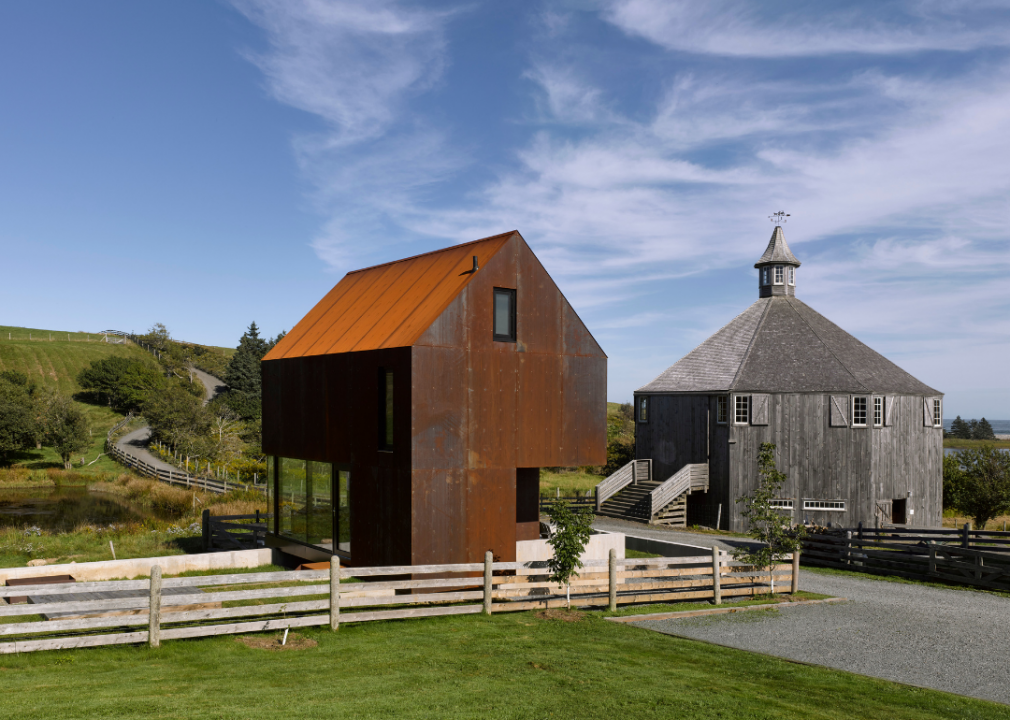 The 700-square-foot Enough House located at the Shobac farm in the village of Kingsburg in Nova Scotia, Canada, explores the concept of “economy as ethic,” according to MacKay-Lyons Sweetapple Architects. The minimalist structure, which was built in 2015, can be easily replicated and customized for different purposes and locations.

The home is placed on pedestal-like concrete fins to protect against overturning from strong winds, and the outside of the building is covered in corten steel (sometimes referred to as weathered steel), which is resistant to corrosion from the elements. The first architect to use corten steel was Eero Saarinen in 1964; he incorporated the rustic material into the John Deere headquarters in Moline, Illinois. While the idea behind this kind of steel is the layer of rust will protect the steel beneath from deteriorating, environmental conditions, like too-high levels of humidity, can sometimes get in the way of the layer developing the proper way, causing the metal to form perforations. 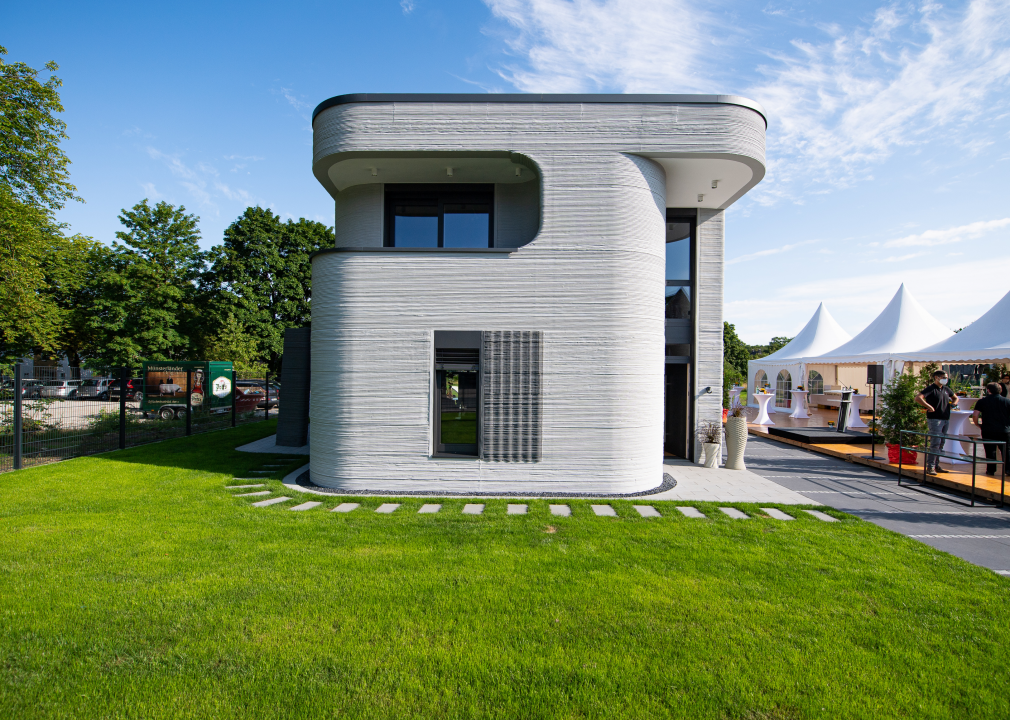 This single-family house in the town of Beckum in North Rhine-Westphalia, Germany, was the first house in the country built using layers of 3D-printed concrete. Constructed in July 2021, the two-story structure has just over 260 square feet of living space on each floor.

Concrete is an inexpensive, highly available material, and concrete 3D printers (while costly) serve as a faster, less wasteful, and generally more economical way to create concrete when compared to more common manufacturing processes. Using 3D printers to build homes has already begun in the U.S. In February 2021, for the first time in America, a 3D-printed home was put on the market on Long Island, New York. The 1,500-square-foot home with three bedrooms and two bathrooms along with a garage was listed at $299,000, which CNBC reports is about half of what a similar house in the vicinity built with more traditional methods would cost. 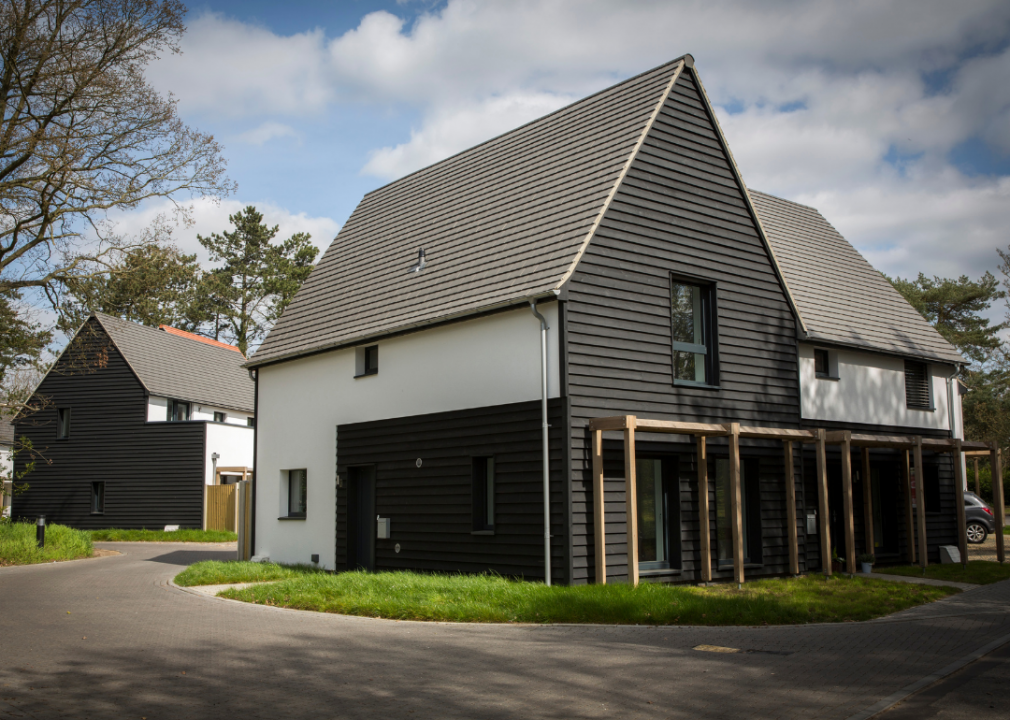 For a home to be considered a passive house, it must meet high standards of comfort, energy efficiency, and affordability set out by various certification bodies. Passive building is implemented around the world, and while the concept stays true, varying climates may require different standards, according to the Passive House Institute, an independent researching body based in Germany. The idea of passive building has roots in Europe and the U.S. in the 1970s when builders began experimenting with airtightness and superinsulation, which was spurred in part by the oil crisis and a need for cost (and energy) efficiency.

This home built in Norwich, U.K., is considered a Passivhaus project, a home that meets the standards of the Passivhaus Trust. The home must have high insulation levels, including high-performance windows with frames that provide additional insulation, be made with airtight building material, and have a mechanical ventilation system that offers efficient heat recovery, among other specifications. 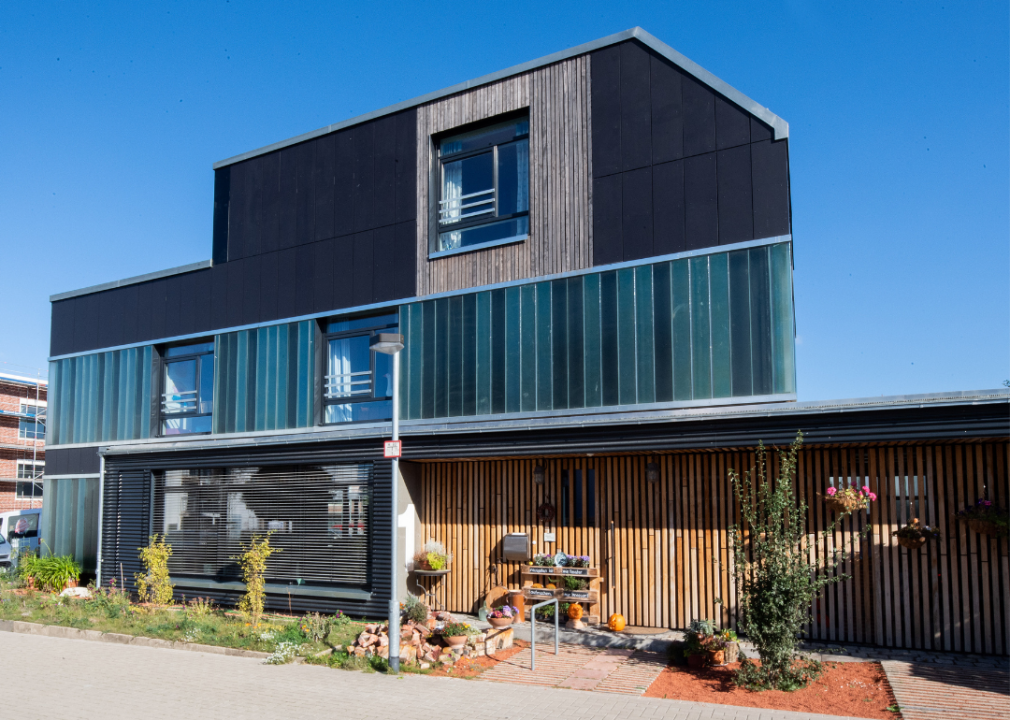 More than half of this house in Hanover, Germany, is made of recycled materials, with the rest of it being constructed using recyclable and reusable materials that can be disassembled without damage. The foundation of the home is made of recycled foam glass gravel and concrete along with solid wood (sans glue), the builders used components from demolition projects for the windows and facades, as well as for parts of the interior.

The home serves as “a prototype that tests the possibilities and potentials of various types of recycling in the real laboratory and shows a cycle-oriented and resource-saving planning approach,” according to Cityförster, an interdisciplinary partnership of architects, engineers, and urban planners, who carried out the experimental project with construction company Gundlach. Cityförster expects incorporating reused and reusable components to play a valuable role in the future of the construction industry.

This story originally appeared on UpNest
and was produced and distributed in partnership with Stacker Studio.

10 tips for a (mostly) plastic-free life