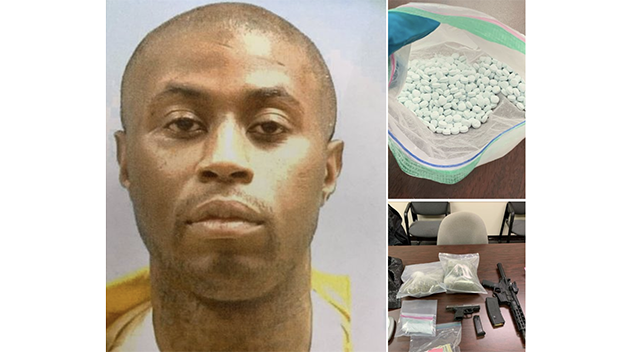 On Nov. 3, 2021, Tupelo Police conducted a traffic stop on a vehicle involved in a disturbance at a Tupelo Walgreen’s parking lot. Officers had previously been dispatched to the area for an altercation between a couple with a child possibly involved.

The driver, Andrago Gaston, 36, fled on foot and but was quickly caught and taken into custody. During an inventory search of the vehicle, officers discovered several hundred tablets of alleged fentanyl, as well as approximately 3 pounds of marijuana.

The child was later discovered to be safe with their mother.

Fentanyl has been linked to several fatal overdoses in our area. According to CDC data overdose deaths involving synthetic opioids (Fentanyl) was nearly 12 times higher in 2019 than in 2013. The fact that this extremely powerful (50 to 100 times more potent than morphine) is regularly mixed with other narcotics, often without the user’s knowledge, makes it even more dangerous.

Gaston had a handgun, an AR style handgun and $3,799 in currency when he was detained. Gaston is a career criminal with 14 felony arrests and is currently on parole with MDOC for sale of cocaine. He is known to frequent the southern Tupelo/Verona area and his arrest will hopefully have a meaningful impact on crimes in those areas. Removing a career felon, illegally possessed weapons and very dangerous illegal narcotics from our neighborhoods is a team effort. This is also an example of the routine communication and cooperation between Tupelo Police and our local North Mississippi Narcotics Unit.

Gaston is charged with Trafficking of a Schedule II Controlled Substance, fentanyl, and possession of a firearm by a convicted felon.