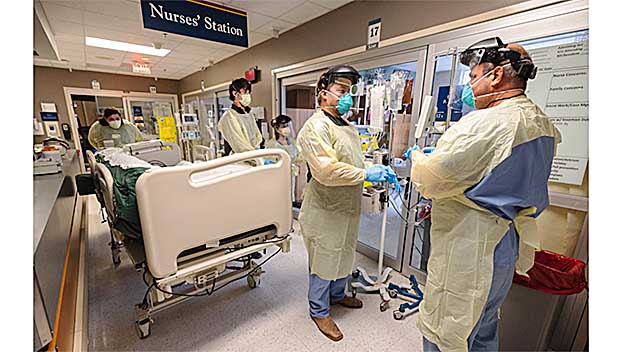 Chief nursing officers from 36 hospitals across Mississippi are begging Gov. Tate Reeves and other state leaders for help as they stare down closing hundreds of hospital beds this winter due to ongoing labor shortages.

Their latest efforts to get the governor’s attention came in the form of a letter, signed by the nursing officers at three dozen Mississippi hospitals, that was sent to the state’s leaders on Friday.

“We sent the bill to the governor on Sept. 30,” Gunn said. “I have not heard anything from him or his staff about this bill, medical marijuana or anything else.”

Gunn said the Senate and Lt. Gov. Delbert Hosemann contributed to drafting the bill and agreed on the language.

“We had talked about (the nursing shortage) with the lieutenant governor and the speaker,” said Mississippi Hospital Association CEO Tim Moore. “But we couldn’t get any direct communication with the governor. So, we decided let’s just send a letter and let our nursing leaders be a part of that.”

Health care workers have been increasingly drawn away from traditional hospital jobs in favor of temporary jobs with staffing agencies that pay up to four times as much as Mississippi’s average nursing wages. This exodus has strained the state’s hospitals, which say they cannot adequately staff hospital beds.

Nurses say they need immediate help, like a bonus program for in-demand health care workers who agree to stay at Mississippi hospitals. Right now, the state has millions of dollars in federal funds available, but lawmakers cannot allocate that money unless called into special session by Reeves.

While the prospects of the Mississippi nursing crisis worsens, other states are using federal pandemic funds to address nursing and other health worker shortages. Louisiana, for example, has earmarked $5 million for a healthcare employment fund for paying nurses and helping nursing schools. Texas has earmarked $400 million of its federal funds for additional health care staffing.

In the Friday letter to state leaders, the nursing officers say Mississippi hospitals will close more than 500 beds this winter because there won’t be enough staff to cover them.

“We write to both alert you to the forecasted bed capacity shortfalls for the upcoming months and to also stress the urgent need once again for state assistance in maintaining nursing staff,” says a copy of the letter obtained by Mississippi Today.

On Oct. 31, federally-funded nurses who came to help through the delta wave left as their contracts expired. Nurses statewide immediately felt the fallout from losing the extra help. Even as COVID-19 cases decline, hospitals are still short on staff and more nurses continue to leave.

Reeves made some comments about the shortage during a press conference on Monday. He said he would continue conversations with lawmakers about creating a retention program, but he talked more about investing in creating and educating more future nurses.

Reeves’ office did not respond to requests for further comment about the possibilities of a bonus or retention program.

“This is a crisis that won’t wait until we have workforce development six months, a year from now,” said Susan Russell, Singing River Health System’s chief nursing officer. “People’s lives are being put into jeopardy right now.”

Russell is one of the nurses who signed the letter to Reeves. She said the state needs both immediate and long-term plans to address the shortage.

Singing River, which has three hospitals on the Gulf Coast, has lost a dozen of its fully staffed hospital nurses in the last week alone. That’s in addition to the 73 temporary nurses that left following the end of their state-funded contracts.

Singing River has put itself at the center of the nursing crisis, calling for the Legislature to use part of the $1.8 billion in American Rescue Plan funds given to the state to create $20,000 bonuses to be given to health care workers over two years.

“I visited University of Mississippi Medical Center, Forrest General, Gulfport Memorial, and Singing River,” Gunn told Mississippi Today. “I saw with my own eyes the citizens who were in need of help. The motivation here (with this bill) is to help our citizens, to make sure they have health care available to them during this pandemic.”

The bill that the speaker’s office and lieutenant governor’s office drafted doesn’t go as far as Singing River’s proposal. But it does call for $56 million of the federal rescue plan funds to allow Mississippi hospitals, long term care facilities and ambulance companies to give up to $5,000 in bonuses to those who agree to stay for a period of five months.

The creation of any type of bonus program would require legislative approval, which cannot happen until January 2022 unless the governor calls a special session before then. Both Gunn and Hosemann have asked Reeves to call a special session to address COVID-19 concerns and the medical marijuana program.

Reeves has announced no plans to do that.

Nursing officers, like Russell, are panicked. They know contract nurses who are not tied down will likely opt out of contracts this holiday season to take a break. Some can afford to take months off, given the high wages they earned working as temp nurses with staffing companies.

Russell, who has spent 38 years in nursing at Singing River, has never seen anything like the current staffing crisis.

“Our hospitals are doing their best, but their funds are also limited, and the costs of labor has increased significantly,” the nurses wrote in their letter. “Such a program would demonstrate your commitment to and appreciation of those workers who have taken care of all of us during the pandemic. These are the workers who have healed and comforted over the last eighteen months and who will be relied upon to continue doing so in the months ahead.”