‘We’re fighting for Jamien,’ Family protests life sentence in 2018 murder case. DA says one ‘must be held responsible’ when choices lead to loss of innoccent life 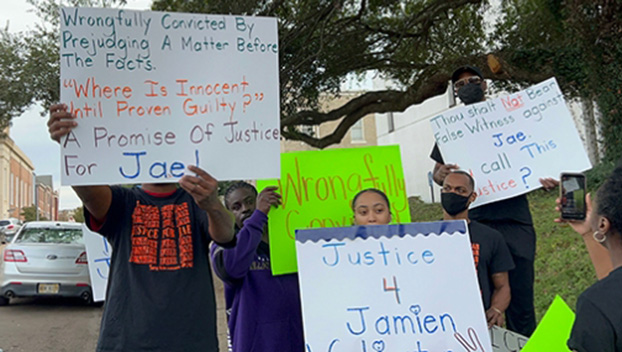 Protesters marched around the Adams County Courthouse for more than two hours on Tuesday morning chanting, “Justice for Jae.”

On Oct. 25, Jamien Washington was sentenced to life plus 15 years in prison at the age of 23 for the 2018 murder of Lewis Jackson III, aggravated assault of Joshua Beamer and Alicia Mason and a drive-by shooting at Holiday Apartments in Natchez, according to a news release from Sixth District Attorney Shameca Collins.

Early in the investigation, former Natchez Police Chief Walter Armstrong said officers believe the series of shootings that occurred on a Saturday in 2018 and resulted in the death of 25-year-old Jackson was in retaliation for an Oct. 1, 2017, incident in which several men rode around town shooting approximately 130 shots from a high-powered assault rifle out of the back of a pickup truck, killing one man.

“Mr. Washington took the stand at trial and testified that when this shooting occurred, he was trying to be someone he wasn’t,” Collins stated at the time of the sentencing. “Mr. Washington made a choice. Life is full of choices. When your choices lead to the loss of an innocent life, you must be held responsible for those choices.”

On Tuesday, Shamerica Jenkins Washington, wife of Jamien Washington, carried a neon poster that stated, “Jamien was robbed of a fair trial! #J4J.”

“We’re here fighting for Jamien Washington because he was wrongfully convicted of first-degree murder, two counts of aggravated assault and drive-by shooting and was sentenced to life plus 15 years without any evidence,” Washington said. “We’re fighting to bring him home and to get justice.”

“Jae is innocent,” Scott said. “No evidence showed that Jamien was guilty. No evidence. I think when the jury came in, they already saw Jamien as guilty.”

In connection to the same incident, two other people were indicted and convicted.

Darryl K. Hurts Jr. pleaded guilty to conspiracy to commit murder and was sentenced to 20 years in prison, 10 suspended and 10 to serve, with 5 years of post-release supervision, according to court records.

Jamien Washington and Stevenson were both indicted on the same charges and it was up to the jury to find either one of them guilty or not guilty of first or second-degree murder or both, Collins said.

“Twelve jurors found (Jamien Washington) guilty and to do that all 12 people agreed,” Collins said. “All of them stated they had no prior knowledge of the case to be on the jury so there is no way they could have already seen him as guilty before the trial.”

Collins said Hurts had testified in court that Jamien Washington was the driver of the vehicle in the 2018 murder.

“The statement he made was consistent with the evidence,” she said. “Jamien’s blood was found in the driver’s seat.  … He made five inconsistent statements and had a whole new statement when he testified in court. That is six different accounts of what happened and some were not even remotely consistent with one another.”

Collins added that according to Mississippi law, even if a person does not fire the shot that kills, they can still be found guilty for being involved in a premeditated incident.

Police: Arrest made in case of Mississippi man found…